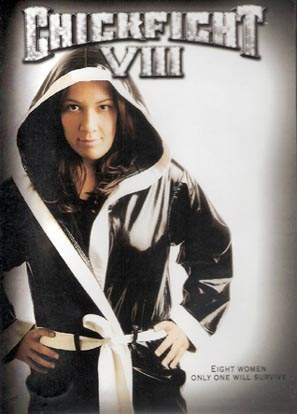 FIRST ROUND MATCH – Wesna vs. Pandora: The first thing that I noticed was that there was no commentary on this DVD, and that is especially important for me personally when I am not familiar with some of the talent. I don’t know a whole lot about Pandora, although she does share at least one of her physical qualities with former WWE wrestler Rikishi. Wesna has quickly become one of my favorite female wrestlers, after seeing her wrestle only two or three times. The Croatian Panther, as she is known, made short work of Pandora to move on to the second round of the ChickFight tournament.

FIRST ROUND MATCH – Jade vs. Violet: The next match featured a couple of young school-girls who I was entirely unfamiliar with. It didn’t really matter who won, because that person would inevitably be eaten up by Wesna in the second round. ChickFight ambassador Cheerleader Melissa interfered, giving the heel Jade the disqualification victory.

Violet attempted to show respect to Melissa, but the “Female Terminator” went heel and destroyed the British vixen. A irate Melissa cut a colorful promo with some salty language, ranting about how popular ChickFight was in America and how embarrassing it was to see girls like Jade and Violet participating in the UK. Melissa’s true grip was revealed, as she called out Trans-Atlantic champion Eden Black for their Falls Count Anywhere grudge match.

TRANS-ATLANTIC CHAMPIONSHIP FALLS COUNT ANYWHERE MATCH
“Jezebel” Eden Black vs. Cheerleader Melissa: The feisty little redhead, Eden Black, is so damn good that you easily forget that she is only about a hundred pounds – one of the smallest wrestlers I’ve ever seen. She has that Rey Mysterio quality about her, where she can make you believe that she can compete on an even playing field with just about anybody. This match, however, was a different story, as Melissa really took out her aggression on the local spitfire. The Jezebel fought hard, with all the heart in the world, but Melissa’s brutality was far too much for her to handle. The referee called off the match after Melissa viciously clocked poor Eden Black with a stiff punch/forearm to the face!

FIRST ROUND MATCH – MsChif vs. Kelly Adams: MsChif is the only former ChickFight winner participating in ChickFight 8. The green mist spewing Scream Queen won the fourth ChickFight tournament, and consequently became the first American to win it. Kelly Adams is another young inexperienced wrestler, but I will give her some credit for her obvious potential. Most of these British girl wrestlers are getting some good training from somebody. MsChif put Adams away with one of her trademark finishers – Obliteration – one of the only finishing moves worthy of its name.

FIRST ROUND MATCH – Jetta vs. Skye: When I first saw Jetta about two years ago, I was very much unimpressed. But with each and every time I saw her wrestle, I was pleasantly surprised to see that she was improving at a steady rate, and by this point she has developed into a very remarkable competitor. Likewise, Skye has shown great improvement since I first saw her, but she is not as seasoned as Jetta – who has become the British version of Lacey. Jetta advanced to the second round after making Skye tap out via submission.

Cheerleader Melissa returned to the ring and challenged whoever wins ChickFight 8 to a Trans-Atlantic championship match directly following the tournament final.

SECOND ROUND MATCH – Wesna vs. Jade: Just like I predicted, Wesna destroyed Jade in a very short match, even with botched interference by Jade’s partner, Kelly Adams. Wesna should be well-rested for whomever she faces in the finals.

SECOND ROUND MATCH – Jetta vs. MsChif: This was quite a match. It was Jetta’s chance to prove that she is one of the top female wrestlers in the UK. Wearing pink and black from head to toe, Jetta stretched MsChif repeatedly, building her confidence along the way. What she didn’t realize was that MsChif is one of the most flexible people on the planet, not to mention having an unbelievable threshold for pain. MsChif survived the onslaught and turned the tables, forcing Jetta to submit to her own submission maneuver.

CHICKFIGHT 8 FINALS – Wesna vs. MsChif: You really never know what you’re gonna get when you watch a ChickFight tournament final. The ChickFight people are known to throw in random stipulations or allow excessive violence in order to provide a clear-cut winner. This match featured a familiar weapon, in the form of a ten-foot ladder, which was pulled out from under the ring. Eventually, it was the “Croatian Panther” Wesna who scored the victory to become the ChickFight 8 champion! 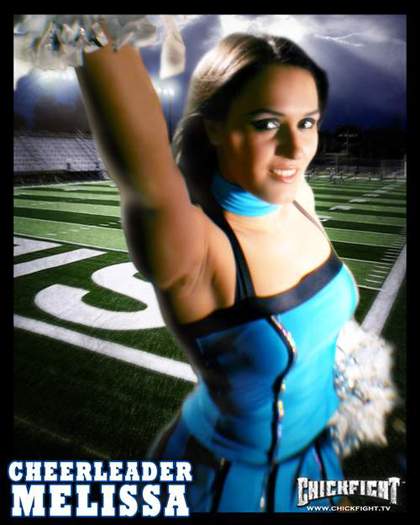 TRANS-ATLANTIC CHAMPIONSHIP MATCH
Cheerleader Melissa vs. Wesna: Wesna’s victory celebration was cut short by Cheerleader Melissa making good on her promise to defend the Trans-Atlantic championship against the ChickFight 8 winner. Wesna didn’t really have a choice in the matter, but I’m sure she would have jumped at the chance to challenge for the title. This match was brutul, but it was icing on the cake as far as I am concerned. The people at ChickFight could have ended the DVD after the tournament wrapped up but they gave viewers one extra match, which turned out to be the best match of show. Those girls beat the living crap out of each other in and out of the ring for a good twenty minutes before Melissa destroyed Wesna with a Kudo-driver (aka Vertibreaker) for the win.

Final Thoughts: As usual, the production for ChickFight was great, and the title menu design is the absolute best in the wrestling business and is up there with the best in any industry. Wesna really earned her stripes on this night, and will hopefully be a big part of future ChickFight DVD’s and episodes of ChickFight TV (www.chickfight.tv). There is also a special bonus match between Pandora vs. Chelsae Carter (although the menu called her “Bubbles”).

If you would like to purchase this or any other ChickFight DVD, you can buy them at most Best Buy stores or you can get them online at Amazon.com or Amazon.ca – For more information please check out ChickFight.TV and watch streaming video samples at ClickWrestle.com. If you’re new to ChickFight than I suggest you check out the ChickFight Starter Kit