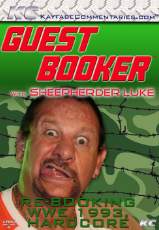 Okay, so for the benefit of those of you who have been living under a sound-proof rock, the Guest Booker series is the brainchild of KayfabeCommentaries.com director Sean Oliver. It features some of the greatest minds in the business booking (perhaps a better word would be re-booking) specific eras of pro-wrestling’s past. For this installment of Guest Booker, they found a man who spent half his career as a blood thirsty heel, and the other half as a face-licking cartoon babyface. He has spent the past few years booking the matches for IWA Puerto Rico, one of the most hardcore territories in the world. You may call him a Bushwhacker, but for this instance we will call him a Sheepherder. He is Luke Williams, mate!!

The Kayfabe Commentaries staff challenged Sheepherder Luke to take the mid-90’s cartoon world of the World Wrestling Federation, and transform it into a brutal hardcore promotion. It was perhaps the most detailed edition of Guest Booker, as Luke would let the ideas flow like lava from a volcano. Luke first described a storyline he would write which incorporated Goldust and Ron Simmons. Next Luke scripted an insane program between The Godwinn Cousins and the Headshrinkers. Last, but not least, Luke laid out his plan to turn the Bushwhackers back to their Sheepherder gimmick to feud with the Smoking Gunns. As usual, it was really quite fascinating to watch a wrestling genius work his magic. Since he did go into so much detail, Luke only had time to plan those three feuds, so I kind of wish there was two or three more. Personally I might have booked several more feuds on the fly, such as Razor Ramon vs. Dean Douglas, Bam Bam Bigelow vs. Savio Vega, and the evil Doink vs. Hakushi.

Sean Oliver doesn’t get to say much, as Luke pretty much goes off on long-winded diatribes, relishing in the hardcore nature of his own booking style. Luke, ever the entertainer, injects a dose of humor in the interview as well. I wouldn’t consider this one of the best Guest Booker DVD’s, but it is certainly unique and entertaining for any wrestling mark out there who has fallen in love with Kayfabe Commentaries.

KFC challenges one of the leading territorial bookers in the history of our business, with the ultimate task of changing the WWE from a cartoon-friendly, kiddie-style promotion — with such characters as Doink The Clown & Mantaur running throughout to a cutting-edge, more-violent serious promotion that true fans may wish to follow. The timeline chosen is 1993, a period just before ECW would start making their footprints, and Japanese companies were booking Bomb & Barbed Wire matches. The WWE was involved in a steroid controversy, and a new direction was needed now. Sheepherder Luke is the man assigned the job of getting fans to rally behind a more-serious product & turn the corner into the future before the other companies leap ahead. Want to find out how The Godwins can be hardcore in a Farmyard Match with all kinds of weapons & draw money? Thurman “Sparky” Plugg, Duke “The Dumpster” Droese, The Smoking Guns, they all are about to become important parts of the WWE roster, via the new hardcore concept. This topic is a lot of fun but will also have you in stitches at times.

Clear & crisp commentary as always during the entire discussion between Sean Oliver & Luke Williams. Dolby Surround in two channels. For the entire near two hours, you won’t miss a word. The gimmicky roster is displayed on screen for the viewer to follow & understand the players. Camera work is basic, but exactly what you need.

Get this DVD. If you lived through all of this, it is a great listen. If you did not, you will be taken back. If you respect old-school smart booking with hardcore issues & heated vendettas and believe it would still draw, take a comfortable seat & listen to Luke tell you how. Not only that, but Luke Williams talks quite candidly about many past issues in his many years in this sport, as he wrestled through territories all throughout the world. The knowledge & understanding that Luke has been through is a must hear. Luke also without any partner sitting next to him is a great talker & really lets out stories you have never heard before. There are plenty of times as well where it gets so funny, you may not be able to stop laughing your posterior off. From wacky to serious, stories & laughter, this DVD has it all.

Sometimes it’s always good to suspend disbelief, which for the most part today is virtually impossible. This production (produced by Kayfabe Commentaries) can bring that great feeling within you.

As always, anytime KFC provides us with a topic like this, the results are always very interesting to the listener, coming from a major talent’s business point of view.