Inside the Office, with Rene Goulet 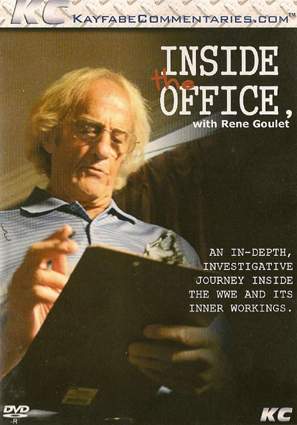 Online World of Wrestling DVD Review
Inside the Office, with Rene Goulet
Available at www.KayfabeCommentaries.com
Reviewed By: Brad Dykens

When I was a little kid growing up in the 1980s, I attended many wild World Wrestling Federation events at the Halifax Forum in Nova Scotia. One of the more distinct memories I have from that time was a flamboyant blonde-haired man in a suit running back and forth to the ring trying to aid in the effort to maintain law and order. I did not know who this man was, but I knew, even then, that he had charisma equal to, or better than, any wrestler. Eventually I would learn that this man was Rene Goulet, a French Canadian legend of professional wrestling. The young mark version of me was witnessing Rene Goulet perform his duties as an official World Wrestling Federation road agent.

The great people at Kayfabe Memories have hit another home run with this unique shoot interview, featuring a dignified Rene Goulet talking about his thirteen year career as a WWF Road Agent. The job of a road agent is endless, and the responsibility placed upon their shoulders is enormous. KC director Sean Oliver grabbed the bull by the horns and made the best of his opportunity to pick Mr. Goulet’s brain about the ins and outs of his life as an important member of the WWF machine. I can’t remember ever getting this kind of insight into the agent’s function from anybody who has been that position.

Rene discusses in detail how he was given the task of coordinating the hundreds of promos and handling the many different personalities the WWF was known for. He talks openly about his interactions with wrestlers and reveals the nature of his communication with Vince McMahon. Imagine a locker room full of boisterous WWF Superstars and it was your job to control all of them. As usual, Kayfabe Commentaries left my jaw hanging with amazement as I listened to another legend educate me with his infinite experience and wisdom.

Go to www.KayfabeCommentaries.com to purchase this DVD.

If you want to know what was it like being an agent in an ever-powerful growing company with a bunch of out of control wrestlers, Rene Goulet will provide you some insight into this scenario. Kayfabe Commentaries strikes back once again with another strong series from a former WWE “head honcho,” who was responsible for almost everything in conducting his crew while they toured the wrestling world. Rene provides a knowledge of his position, his job, the responsibilities on all levels as well as comparisons between the ’80’s (when he was a worker) & the ’90’s (when he was a boss). Go behind the scenes & listen in to the in-depth investigative journeys within the WWE’s inner workings.

Everything is crystal clear: The camera work is excellent, and you do feel just like you are sitting side-by-side with a true businessman in the wrestling industry. Professional mastered & titled, Kayfabe Commentaries once again provides a professional approach to their latest release.

Sean Oliver brings you back in time to the days of Rene Goulet, as he finishes his wrestling career in the ring & gets approached into becoming an agent on the road. Back when he took this job, the WWE was sometimes running up to three separate shows on the road every night, and the company needed a man who they could respect getting to the building early, right through the set-up, opening bell, final call, payoffs, & gate receipts, only to get to the next town hours later and do it all over again & again. How do you handle the no-shows, late arrivals, backstage ribbing, & maybe even the wrestlers in no condition to perform? What do you tell Vince every night when you have to phone in the report? What about the hectic job of running a five-hour TV taping sometimes three days in a row? Considering this travel over 200 dates/year, Rene ultimately shares with you his final notice for working with the WWE & how he reacted to Vince McMahon’s decision to release him from his duties.

Although kind of short, 80 minutes of backstage information & inner-working stories is plenty enough for me to be satisfied. Once again, Kayfabe Commentaries goes outside the box & stirs up the scenarios when providing their latest work. This is a great listen from a former high-ranking WWE official who has seen plenty.

Without question, a great job by Kayfabe Commentaries. Although not name-calling, Rene was very honest with many of his stories & backstage situations.

Final Thoughts: Any fan with a taste for the “inside’s of the business” should definitely purchase this DVD to take a listen to & watch.

This DVD was reviewed By “Wild” Bill Brown. Visit the official website & MySpace pages of The Mayhem’s official DVD reviewer at www.BBrownVideo.com & www..MySpace.com/BBrownVideo.

Go to www.KayfabeCommentaries.com to purchase this DVD.