Kevin Sullivan and the End of WCW 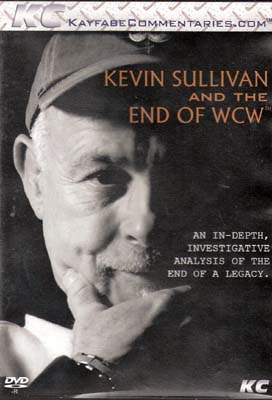 KEVIN SULLIVAN
And the End of WCW

Description: While Eric Bischoff was taking a most of the credit, and Vince Russo was taking most of the blame, there was one guy who lived through it all and openly takes responsibility for both the good and the bad during WCW’s roller-coaster years at the top and bottom of the wrestling industry. His name is Kevin Sullivan and he has worn many hats during his long career in professional wrestling.

Kevin Sullivan was featured in KayfabeCommentaries.com’s very first DVD entitled “Guest Booker with Kevin Sullivan.” In that DVD interview, Sullivan reorganized the 1984 line-up for a product that he had nothing to do with – the World Wrestling Federation. In this latest DVD from KC.com’s Sean Oliver, Mr. Sullivan dissects a product for which he has first hand knowledge of all aspects – that being World Championship Wrestling – specifically the downward spiral and ultimate death of the company. It continues to be one of the biggest news stories in the history of professional wrestling; the death of WCW rocked the industry and changed it forever – its rippling effects still being felt today in both WWE and TNA. The reasons which led WCW to its unfortunate demise are too numerous to mention here in this review, but I think everybody understands that WCW disintegrated because it was poorly run by a company (AOL/Time-Warner) that was embarrassed to be associated with the wrasslin’ business. Ted Turner, who loved wrestling with a passion, had lost all his power, and could no longer save the show that helped his TBS Super Station become a major destination for television viewers. Kevin Sullivan was there for most of it, through all the highs and all the lows; as a wrestler, as a booker, as a writer, as an agent, he was as involved in laying the foundation of WCW as much as anybody in the company. So what I’m trying to say is, Kevin Sullivan knows what the hell he’s talking about when the subject of WCW’s downfall comes up, and thankfully he’s not too bitter to talk about it.

KC.com director Sean Oliver guides viewers through the many incarnations of WCW, through each era represented by a different figurehead, who was put in charge of the company or the creative direction of the company. Then we take an in depth look at the final year of WCW’s existence, when many people could already see the writing on the wall, a message that was loud and clear, “WCW was doomed.” Still, die-hard wrestling employees like Kevin Sullivan, hung on for dear life, literally going down with the ship (while others bailed). It’s not like this topic hasn’t been covered before; Remember, R.D. Reynolds and Bryan Alvarez published a book called “Death of WCW” a few years back. That book was adored by fans but trashed by people in the industry because clearly Reynolds nor Alverez had spent a day inside of WCW. This was a brilliant effort by KC, and my only complaint is that it should have been four hours instead of two.

KayfabeCommentaries.com
Kevin Sullivan and the end of the WCW

Description: “We took the golden goose and we chopped it’s head off.” That was the best quote of many given during the nearly two hours of KayfabeCommentaries.com’s release KEVIN SULLIVAN AND THE END OF WCW. The man known to Championship Wrestling from Florida fans knew as the Games or Task Master was a fixture in the former World Championship Wrestling going back to the days when it was run by the Carolina-based Crockett/NWA promotion. He was there when Ted Turner and his conglomerate bought the promotion in the early 90’s. He was there through the embarrssing reign of Jim Herd and the rise to power of Eric Bischoff thanks to the New World Order gimmick and the arrival of cruiserweights. More importantly he was there when things began to turn the other way in the 88 straight week butt whooping WCW gave the former World Wrestling Federation in the TV ratings. This DVD will take you through the events mentioned above; naming the power players like Bill Busch, Brad Seigel, Harvey Schiller and other WCW executives, plus the weeks lying ahead when Bischoff was forced to step aside when former WWF TV writers Vince Russo and Ed Ferrera arrived in what was then considered a mega coup.

Sullivan was in a unique situation as he was given the booking duties after WCW/AOL-Time Warner decided six weeks was enough to show Russo/Ferrera weren’t the answer to getting viewers back to the PPV buying window, TNT & TBS. He was in the best possible spot with the roster including Goldberg, Sting, Hulk Hogan, Kevin Nash, Scott Hall plus the NwO, The Giant (Big Show), Booker T, Ric Flair, Scott Steiner, Lex Luger, Sid Vicious, Terry Funk, Jeff Jarrett and the amazing cruiserweights to be mentioned in a moment at his disposal to get WCW back on top. So how the hell did it go wrong and WCW fell apart?? After the great background segment thanks to interviewer Sean Oliver, Sullivan goes through a week by week breakdown of PPV’s, Nitro and Thunder events covering the time frame Jan 16 (when the late Chris Benoit won the championship but subsquentially left with Dean Malenko, Eddie Guerrero and Perry Saturn to WWF) through March 2000 when Sullivan is pushed out thanks to scheming of Russo/Bischoff, the political backstabbbing, wrestlers going behind his back to management, wrestlers shooting on each other on live television and other squabbles you have to hear to believe. Want to know what its like to be told how to run a wrestling promotion by people who couldn’t tell you what a wristlock is, Sullivan does and he goes in-depth on booking meetings when things got real tense. I have read “the Death of WCW” and seen a shoot interview with Russo/Ferrera and this DVD interview is equal if not better thanks to Sullivan’s candor and the research of interviewer.

This excellent DVD is for sale on www.KayfabeCommentaries.com along with other releases. I will be back in the coming weeks with reviews of Shimmer, GLOW and WWE DVD’s.