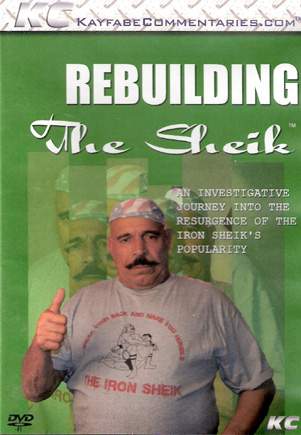 Description: This is the first offering from Kayfabecommentaries.com for which I am going to deliver a negative review. KC director Sean Oliver has produced some of the most innovative DVD’s in the past but I have to report that I was not as impressed with the latest release, entitled “Rebuilding the Sheik.” The DVD features a ninety minute sit down interview with Sean Oliver throwing softballs at the always volatile (but legendary) Iron Sheik, with Sheik’s agent, Eric Simms, sitting in the middle interjecting his unwanted opinions on all the topics covered. Who is this guy? The discussion barely touches on actual wrestling topics, but instead goes around in circles tip-toeing around the same desperate issues over and over. The Sheik and agent Eric Simms would suddenly engage in alleged “worked” verbal confrontations (disagreements) leaving Sean sitting there twiddling his thumbs before trying to restore order.

The whole purpose of this “shoot” interview was to analyze the resurgence of popularity enjoyed by the Iron Sheik, from his controversial publicity stunts to the volatile nature of his personality – which blurs the line between fiction and reality. It pains me to see the Iron Sheik stoop to these levels, when I know he capable of being a respectable legend in the world of professional wrestling. I saw his WWE Hall of Fame induction speech, and while he was a little bit unorthodox, he maintained his composure and his speech made for than a few memorable moments. But when the Sheik is set loose in the public and somebody asks him about Brian Blair, then we get a whole different Sheik. I’m aware that I’m getting worked, but I don’t find it entertaining and I also find it disturbing that some people do.

The idea probably sounded good on paper, but (in my humble opinion) this DVD turned out terrible. Sorry Sean. But if you’re a wrestling fan, you like craziness and unnecessary profanity, and you have some extra money burning a hole in your pocket – then go ahead and buy the DVD and see for yourself. I feel terrible writing bad reviews, so I do want to recommend other KC.com DVD’s such as the phenomenal Guest Booker series (featuring Kevin Sullivan, J.J. Dillon, and Gabe Sapolsky) as well as the YouShoot series (featuring Honky Tonk Man and the upcoming Missy Hyatt DVD), plus the really cool My Side of the Story featuring Tito Santana and Greg Valentine. Excellent stuff.

Description: I have been an avid listener of the Howard Stern Show for about 10 years now. This past august when Stern debuted some clips of the now infamous Iron Sheik shoot interview, I marked out so hard that I soon found myself amongst the new and quickly expanding fan base that the Sheik was building. Throughout the rest of the year I was always in search of the next awe inspiring piece of Sheik footage, but I also found myself wondering was the Sheik working us all into being huge marks, or was this really all just a shoot, I posed this question to many stars that I interviewed in the last few months of the year and was given various answers, none of which satisfied my curiosity, However I search no longer, as Kayfabe Commentaries, who seem to put out innovative project after innovative project, now offer up “Rebuilding The Sheik”, a in depth documentary like look at Sheiks new found stardom featuring Sheik and his long time agent Eric Simms as they shoot on all the infamous incidents and interviews from this past year of renewed Sheik popularity.

Beyond a shadow of a doubt, “Rebuilding The Sheik” is your definitive Sheik shoot that sets the record straight on just how much of his recent act is a work, but it’s also a disturbing look at how a 65 year old man is battling a severe addiction that causes him to have to act the way he does.

In a solo interview that gets peppered in throughout the 90 minute feature, Long time Sheik agent, Eric Simms sets the record straight right off the bat saying “When it’s time to turn it on, it’s turned on, and when it’s go time, he’s the best in the business, and you’ve seen it, he’s crazy” We then have Sheik start in on Brian Blair, and I feared for a moment that this was going to be another one of Sheik’s now normal rant filled shoot interviews, But luckily things are kept short on that end and host Sean Oliver moves into talk of Sheik’s use of “medicine” and how open he has been about it in previous shoot interviews. Sheik though begins to deny some of his medicine use because he is in front of the camera, and ends up in a argument with Simms about what is worse to abuse, Alcohol or Marijuana. Simms in private sets the record straight saying that Sheik uses it all but Marijuana is his favorite, as is beer, and his addiction has become so bad to it that Simms says “I cant go to the airport without a six pack..and a pack of Marlboro… and if I don’t…I’m a cheap jew son of a bitch” Later in the interview, Simms reveals an even darker side to Sheik’s current abuse of various substances, as it has caused a financial strain on Sheik’s family, as he spends most of his wrestling paydays on “medicine” and then calls and begs Simms for more money pretending to need to pay a bill for his wife, but its just a prime example of how he Sheik has truly become an addict, but it probably wont end up killing him, instead, taking him into rehab, which has not worked for him in the past, and getting him off the “gimmick” will probably kill him more.

Looking beyond the drug abuse, “Rebuilding The Sheik” looks at the series of incidents from the past couple of years that Sheik has ranted on time and time again, from the Boston/Dan Murotti incident, the Toronto/MCW incident, to the Ultimate Warrior and Hulk Hogan “fag” rants, The difference between “Rebuilding The Sheik’s” look at these incidents, and previous shoot interviews look at them is that for once Sheik and Simms talk about them calmly and specify the who what where and why these incidents happened. They also talk about how some of those Sheik rants about realize how much of a work his current act currently is as they speak of a recent meeting with Hulk Hogan where they hugged and kissed and were very cool with eachother, meahwhile the heat with The Ultimate Warrior is legit and they explain why. There is also some new rants on Bubba The Love Sponge and Artie Lange of the Howard Stern Show.

They also look at the business side of things and how his recent resurgence in popularity has been handled as Simms explains how he tries to protect the gimmick by preventing from everyone exploiting and killing the sound bytes and Whether they have increased the asking price for an appearance.

Also for the first time you get to hear and see how hard it is for Simms to have a client like The Sheik. Stories of how the two nearly ended up in physical brawls in a restaurant during Wrestlemania weekend, and how Sheik nearly got himself arrested in a airport screaming at Simms for being late are highlights.

Rebuilding the Sheik is exactly what I was looking for and It’s probably what many of you have been looking for. It’s not your everyday shoot interview, there may be a couple of instances where this borders on that, but this is as the DVD cover puts it an “investigative journey” into Sheik’s new act. Something tells me there is probably a whole bunch of deleted scenes from this as host Sean Oliver seems exhausted by the end of it, but it’s probably better that whatever typical Sheik BS was left out as this DVD was not meant for it. Therefore it doesn’t matter if you have seen every Sheik interview form the past year, this is a new, entertaining, and informative watch, and I’d recommend picking it up.

“REBUILDING THE SHEIK” is now available on DVD from Kayfabe Commentaries for the low price of 20$. For more information or to order your own copy, head on over to www.kayfabecommentaries.com , Also feel free to check out our previous KC product reviews in our reviews section at www.maineventradio.com/reviews.htm , previous KC reviews include those for “My Side of the story : Tito vs Greg”, “Guest Booker with JJ Dillon” and “You Shoot : With The Honky Tonk Man”,