YouSHOOT with the Honky Tonk Man 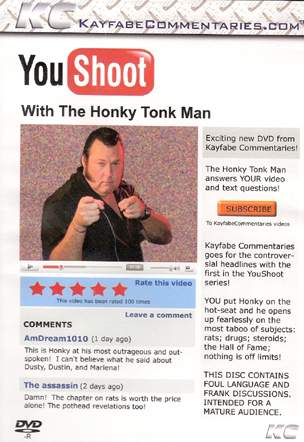 Description: I’ll say right up front that I’m not a fan of the Honky Tonk Man. I am definitely a fan of his work in the eighties, but sometime after that he stopped entertaining me at the level I came to expect. Despite this negative opinion, I have a great deal of confidence in the KayfabeCommentaries.com crew, so I popped this DVD into my player anticipating two hours of good times and a lot of laughs. Following the format of the highly successful CNN YouTube Presidential Debates, Kayfabe Commentaries host Sean Oliver invited wrestling legend Honky Tonk Man to sit down for a no holds barred shoot interview, fielding a variety of questions from average fans submitted via email and online videos.

KC.com is the website responsible for the famous ground-breaking series of “Guest Booker” DVD’s featuring Kevin Sullivan, Gabe Sapolsky, and J.J. Dillon. The Guest Booker concept was so fresh and unique that I couldn’t help but have complete faith that the first edition of YouSHOOT concept would be equally captivating.

The phrase “no holds barred” is often used as a cheap cliche that is never really taken advantage of to the fullest. For the purposes of this interview, all topics truly were open for discussion. Honky Tonk Wayne Ferris has strong opinions of many people in the wrestling business and he is not one bit shy about sharing them with anybody who will lend him their ears. This DVD is not for the kids either, as Honky goes into a 15-minute colorful rant about where the best rats are geographically, named specific wrestlers who used the rats, and what wrestlers got the most rats. For those of you who don’t know what a rat is – rats are professional wrestling’s version of groupies (girls who live to have sex with wrestlers). When it comes to shoot interviews, everybody loves a good rat story. The interview is packed with foul language, which I personally find offensive, but it shows Honky Tonk was relaxed and comfortable about what he was talking about. Honky Tonk expresses his feelings about the WWE, Vince McMahon, Jake the Snake, Dusty Rhodes, Jay Strongbow, Billy Gunn, Ric Flair, Dirt-sheet writers, and a whole lot more, using jaw-dropping terms that will shock you into submission.

Rating: 7 / 10 – Though my opinion of Honky Tonk Man didn’t change, I was honestly entertained by Honk Tonk Man’s candid responses to legit unedited questions from genuine wrestling fans. Shake, Rattle, and Roll over to KayfabeCommentaries.com and check out all the great content and merchandise they have available!