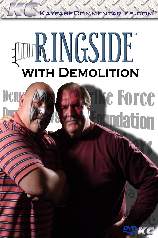 Search and destroy you
Run and we’ll find you
There’s no place to hide
The Demos wil get you!!

The premise of this special DVD was for legendary wrestlers Bill Eadie and Barry Darsow to sit in front of a camera and take a walk down memory lane, discussing the legacy of one of the most powerful tag teams in the history of pro-wrestling. Demolition was a combo that was created by the WWF to imitate another tag team working for a competing company. The power-house team painted their faces and wore menacing ring gear, just like the NWA’s Road Warriors. Demolition, however, broke through the shadows of the Warriors and carved their own legacy in stone. The interview was slightly gimmicked for visual stimulation, as Eadie and Darsow literally transformed into their Ax and Smash characters by applying make-up to their faces throughout the opening segment. Some shoot interviews are hard to watch because the visual offering is not stimulating, but Kayfabe Commentaries figured out a clever way to tingle the viewers senses a little bit.

They started out at the beginning (quite appropriate), with Bill Eadie talking about creating the Demolition gimmick with original member Randy Colley. Both men praised Colley as being a great guy, and certainly made a point of putting him over personally and professionally. They talked about what it was like working as Demolition – in the ring, and out in the public. Throw in a bunch of road stories and you’ve got a good time had by all.

The “Ringside” DVD concept takes the subject of the interview back in time, and plays some of their greatest matches on the monitor so they can talk about what was going on before, during, and after the matches. Demolition shared their thoughts on famous matches with Strike Force, the British Bulldogs, the Powers of Pain, the Brain Busters, the Collosal Connection, and their famous clash at the Royal Rumble when they picked the #1 and #2 spots. Demolition talks about the backstory of each match and the politics behind the scenes at the time.

One of the most interesting segments focused on a match between Demolition and the team of Andre The Giant & Giant Baba, at an event co-promoted by the WWF, All-Japan, and New Japan.   Eadie and Darsow provided amazing insight into exactly what went on to make that match, and the entire event, possible.  They talked about the respect that the Japanese culture has for professional wrestling as well.

Check out this and tons more from Kayfabe Commentaries at www.kayfabecommentaries.com

Kayfabe Commentaries newest release might be their best to date. The Ringside series debuted a few months ago with guest Big Van Vader/Leon White. But the next guests take it to a level that a shoot style interview rarely gets to. On this edition Sean Oliver sits down with Bill Eadie & Barry Darsow who my generation knew as Ax & Smash the tag team called Demolition. Before they begin viewing the matches Oliver somehow talked the duo into putting on the legendary makeup in front of the cameras. During this time they discuss the creation of the characters, leaving former characters behind (Eadie worked as Masked Superstar, Darsow as Krusher Krushev), working with Hall of Fame manager Mr. Fuji plus their family life on and off the road. Here are the matches Demolition talks about:

In the pre-viewing dicussion mentioned above Oliver brings up the obvious question about comparisons to the legendary Road Warriors and I was surprised at the answer given by Eadie & Darsow. Like with the Vader DVD, Oliver gets his interview subjects to open up in areas you might not expect to hear and stories which will have you falling over laughing. The only flaw as mentioned in the Vader review is you aren’t watching the matches, you’re watching people talk about the match. For a while it works but then again it also doesn’t help. Log onto www.kayfabecommentaries.com for their next releases which include History of the WWF: 2000 with Rikishi and Guest Booker with Jim Cornette.