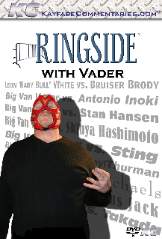 If you’ve been following this website for any length of time, you have probably figured out by now that I am a huge mark for most of the KayfabeCommentaries.com DVD releases. I’ve been fortunate enough to acquire and review every single DVD produced by Sean Oliver, and their track record has been remarkable. I popped the “Ringside with Vader” DVD into my player expecting another home run, and boy was I right. The premise of the DVD has director Sean Oliver sitting down with former World champion Leon White (known in the wrestling world as Big Van Vader) and watching some of his most famous matches. This posed one immediate problem; Oliver, nor his company, owns the rights to utilize this footage. I was initially nervous about how this video would turn out, as the prospect of watching two grown men watch a TV where I cannot see the screen sounded a bit frustrating. Fortunately, it was more about the shoot interview than it was about the footage they were discussing. A lot of the stuff they were talking about can be found on YouTube, so you may find it helpful to log onto that site while you’re watching this DVD.

Big Van Vader is built like a baby bull, and has an unusually quiet demeanor. Luckily for the viewers, he isn’t shy about expressing his feelings when called upon. Do you know the origins of the Vader character? If you’re like me, and foolishly believed it was from Star Wars, then you’d be wrong! Haven’t you ever wanted to hear Vader’s version of the story from Germany where Cactus Jack lost his ear? I’m sure you would love to know what REALLY happened backstage with Paul Orndorff on the day he was fired from WCW? You can learn what Vader’s true feelings are for Sting. The man has been everywhere and seen it all. Vader gives some insight into every promotion he’s ever worked for, including details on how the promoters treated him; Eric Bischoff, Vince McMahon, Antonio Inoki, Giant Baba, and more. Analyzing matches he had with Bruiser Brody, Antonio Inoki, Stan Hansen, Shinya Hashimoto, Sting, Cactus Jack, Shawn Michaels, and several others. They also discuss the infamous handicap match on WCW Saturday Night where Vader accidentally broke a young jobber’s back doing a stiff power-bomb. Vader even had some particularly harsh words for Japanese legend Shinya Hashimoto.

If you’re not a fan of Kayfabe Commentaries, then become one now and head over to their website at www.KayfabeCommentaries.com and pick out a couple of amazing DVD’s from their growing collection.

RINGSIDE with VADER
Available at www.KayfabeCommentaries.com
Reviewed By: Alan Wojcik or www.alanwojcik.com

It’s time, it’s Leon White time. Bet you’re asking yourself who the hell is Leon White? Well wrestling fans around the world know him by another name; Big Van Vader, the former world heavyweight champion in several promotions in America and overseas. He has been in some high profile matches over that career, so the people at KayfabeCommentaries.com sat him down to talk about them with Sean Oliver for their debut RINGSIDE DVD. The concept sounds great. Take a pro wrestler, sit him down, make him watch the matches and talk about them. The following are the matches White & Oliver talk about over the one hundred minute program:

Unlike some reviewers I will not break this down segment by segment. The good news is White is a great interview and Oliver helps him keep on track. White has some great stories of working the late Brody, the birth of Big Van Vader and who almost became the character, thoughts on having his nose broken by Hansen before the match started then suffering an interesting eye injury (glad there’s no footage of that), being managed by the legendary Harley Race, brawling with Paul Orndorff, watching Foley’s ear come off in Germany, the differences between the AWA, NJPW, WCW and WWE plus who was the best wrestlers he faced over his career. The bad news is this since the fed up north owns nearly all the video rights the format only allows for the interviews as opposed to the two men doing alternate commentary on the matches. That makes me give a mixed choice on the review grading. I like the interview with White but with no matches to see what’s the point of the format. You be the judge when you purchase the DVD from www.KayfabeCommentaries.com where you can send in questions for the next YouShoot interview with New Jack and see a sneak of the Timeline Series on the History of the WWE.

Upon reading the background of the DVD, I was intrigued. Vader and KC co-owner Sean Oliver discuss some of Vader’s most famous matches while actually watching the matches together.

I have high expectations when it comes to Kayfabe Commentaries. They’ve done such a great job with each of their shoot-style DVD releases that they consistently up the bar.

Popping in the DVD, it seemed as though this new style of shoot interview wouldn’t meet expectations because the audience is left out of the viewing party. Vader and Sean sit at a table while watching a TV screen – a TV screen that is out of view of those sitting at home.”

How am I supposed to follow this?” I asked myself.

Those familiar with several recent WWE DVDs will recall how some matches have new commentary provided by an actual announcer and the wrestler being profiled. I assumed the situation would be the same here, with Vader providing play-by-play for his own matches.

It wasn’t long before I realized that’s not really the point of “Ringside.”
Rather than give a blow-by-blow description of the action, Vader gives a step by step recollection of how the matches came to be, the backstage goings on of the time, and some fantastic stories from both in and out of the ring. While the in-ring action is mentioned from time to time, it’s not a distraction and it doesn’t leave the viewer feeling left out.

Baby Bull vs. Bruiser Brody
AWA, May 1986
– How Vader broke into the business
– What it was like working for Verne and Greg Gagne
– How the AWA talent of that time went on to become successful in other promotions
– Working against Brody and what influence Brody had on his career

Big Van Vader vs. Antonio Inoki
Sumo Hall, December 1987
– Working in Japan
– Making his debut against Inoki
– What liberties Inoki gave him to help Vader get over in the match
– Drinking backstage with Masa Saito just before the match

Big Van Vader vs. Shinya Hashimoto
Tokyo Dome, April 1989
– How he compares Hashimoto to other Japanese stars like the Great Muta and Masahiro Chono
– Wrestling nearly an hour in three separate matches during this tournament for the IWGP championship
– How the Vader character got over in Japan
– How his headpiece was controlled
– What he thinks of his stiff working style compared to Hashimoto’s stiff working style

Big Van Vader vs. Stan Hansen
Tokyo Dome, February 1990
– Thoughts of having his nose broken before he even got in the ring
– Memories of shoving his eye back in the socket during the match
– His friendship with Hansen and how that was somewhat strained during and after the match
– The surgeries he underwent after the match

Big Van Vader vs. Sting
WCW Great American Bash 92
– How he was brought into WCW
– Thoughts on his first match with Sting and their in-ring chemistry
– How he compares Sting to other wrestlers he’s worked against
– Comparing the southern wrestling crowd to that of Japan and the AWA
– Road stories with Harley Race and how Race helped him behind the scenes

Big Van Vader & Joe Thurman & TA McCoy (handicap match)
WCW Worldwide, November 1992
– His memories of the night he broke Thurman’s back
– What he thinks of the incident now
– Visiting Thurman in the hospital that night with Race
– What Thurman is doing now

Vader vs. Cactus Jack
Munich, Germany March 1994
– Memories of the night Cactus lost his ear
– Working for WCW during the European tours
– First-hand account of the night Sid Vicious and Arn Anderson got into the scissors fight
– His thoughts on Cactus’ wrestling style and the two men’s relationship

Big Van Vader vs. Shawn Michaels
WWF Summer Slam 96
– His account of the backstage incident with Paul Orndorff that led to him leaving WCW
– How he was brought into the WWF and his health at that time
– Thoughts on the Clique
– Shawn Michaels attitude at the time
– Whether he was or wasn’t supposed to get the belt
– What led to him leaving the WWF and who made the decision

Big Van Vader vs. Nobuhiko Takada
Budokan Hall, August 1994
– How he was approached for the fight while working for WCW
– Working a shoot style match
– His take on Takada’s career
– Whether he could have been a good shootfighter

Those are just some of the highlights of what is a very entertaining and enlightening release. But with Kayfabe Commentaries, should we expect anything less? The DVD is available online at www.kayfabecommentaries.com