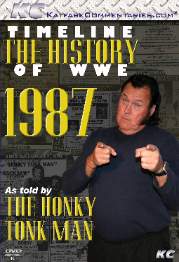 Online World of Wrestling DVD Review
Timeline – History of the WWE 1987
As told by The HONKY TONK MAN
Available at www.KayfabeCommentaries.com
Reviewed By: Brad Dykens

I was thrilled when I heard that Sean Oliver from Kayfabe Commentaries was teaming up with Graham Cawthon from the History of the WWE website to produce a unique series of shoot interviews focusing on Vince McMahon’s World Wrestling Entertainment, beginning with my personal favorite WWE era (1987). Not only is this a very unique concept, but it involves two people who I respect very much.

Where else would you begin, but in January as the WWF began its build towards what I consider the greatest WrestleMania of all time – the third installment of that great event. Honky Tonk Man was put in the hot-seat to walk through this epic time period, when he was a major player in the Federation. Honky Tonk talked about his own storylines with Jake “The Snake” Roberts, Randy “Macho Man” Savage and, of course, his victory over Ricky “The Dragon” Steamboat which launched his infamous reign as Intercontinental champion. Honky Tonk also discusses the philosophies behind the creative process behind many of the other matches that took place at WrestleMania III, like the Roddy Piper retirement gimmick and main event between Hulk Hogan and Andre The Giant. Viewers will also get a glimpse into the locker room at the time, finding out what went on behind the curtain as Vince McMahon prepared to turn his little Northeast promotion into a global phenomenon.

Sean Oliver guided Honky Tonk Man off the beaten track, discussing some of the well known mistakes of the era, such as deep insight into the Outback Jack character, and what was going on with Vince’s botched protege, Tom Magee. Honky Tonk also reveals the true story behind Jim “The Anvil” Neidhart’s controversial arrest, Dynamite Kid’s back injury, the Sheik/Duggan drug bust, the Million Dollar Man, the David Schultz incident, repackaging of Ken Patera, the making of the Piledriver album, the first ever Survivor Series, Andre The Giant’s health, road agents, action figures, ice cream bars, and a whole lot more interesting details that could only be told by somebody who was there to witness all the craziness that only a WWF locker room can offer. Great DVD, I suggest you check out!

Timeline – History of the WWE 1987
As told by The HONKY TONK MAN
Available at www.KayfabeCommentaries.com
Reviewed By: Alan J. Wojcik from alanwojcik.com

He’s Cool, he’s cocky, he’s bad and he’s back with the people who run KayfabeCommentaries. The “greatest intercontinential heavyweight champion of all time” the Honky Tonk Man was the companies first subject for their You Shoot DVD series. So its fitting he is the initial guest on a joint project with www.thehistoryofwwe.com for Timeline: the History of WWE. This appears to be a set up for a series and they begin with 1987.

Like always Sean Oliver is along for the trip and this is an intresting concept, take a former WWF/WWE superstar and run the calendar year with them. 1987 is a great starting point since it saw the birth of the Survivor Series PPV and the record breaking WrestleMania 3. 1987 was also the year Honky got a huge push in the WWF along with some good and horrible characters. There is an on-screen guide before each segment giving the bullet points of that month before Honky muses on the subject. Like his YouShoot DVD, Honky holds nothing back and I love that fact. As I mentioned this covers the entire year beginning with the January shows that saw the Hogan/Andre feud begin and Roddy Piper announce a retirement. From there Honky and Sean cover all the key moments of the year: WrestleMania 3, debuts of Outback Jack, Ron Bass, “Hacksaw” Jim Duggan (and his arrest with the Iron Sheik), “the Million Dollar Man” Ted DiBiase & Tom Magee; trouble with Dynamite Kid, Jim Neidhart & David Schultz, the returns of Ken Petera and “Superstar” Billy Graham plus stories from Saturday Night’s Main Event tapings, Superstars tapings, the King of the Ring & initial Royal Rumble (long before they became PPV’s).

Despite what people think of him, Honky Tonk Man is a eloquent person and was the perfect choice for this initial DVD. I consider myself a wrestling junkie and this DVD brought back things I long forgot. Honky takes you through his vignettes at Graceland, the backstage stories & overall atmosphere when new people came into the promotion or the NWA ran in the same town/same night, his feuds with Jake Roberts, Ricky Steamboat and Randy Savage and what is was like to see royalty checks for action figures or lack of for ice cream bars. Awesome debut for the series and I can’t wait to see who they choose next. Buy this DVD now at www.KayfabeCommentaries.com to buy plus also submit YouShoot questions for Sabu and be sure to visit www.thehistoryofwwe.com