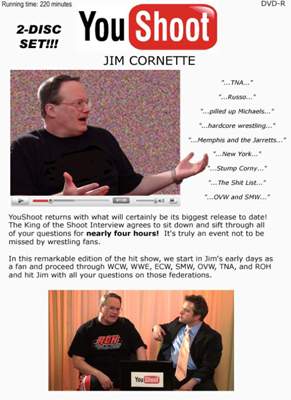 The entire Kayfabe Commentaries concept must have been developed with the legendary Jim Cornette in mind. With all of his uncensored opinions he is the perfect subject for the popular DVD series. He has already been used for one edition of Guest Booker, and should be brought back for “part two.” Now he has agreed to sit down and take no-holds-barred questions from the fans in the greatest YouSHOOT interview of all time. I believe the KC staff already has Cornette lined up to be the next victim in its Ring Roast series. Simply put; Cornette is THE MAN.

The YouSHOOT concept is simple; you sit your arse down and KC director Sean Oliver bravely relays intimate questions submitted by fans. Fans, who in many cases, get a little carried away from the safety of their computer screen or webcam. Cornette, however, faces the firing squad with truth, honesty, respect, and dignity.

Some of the topics raised during this interview include; early memories, fan clubs & newsletters, getting smart to the business, working for the von Erichs, Smokey Mountain Wrestling and the video library, tape traders, Paul Heyman, Tuesday Night Titans, meeting Vince McMahon, and so much more. One of the biggest thrills is when your own questions get read on the program. I was so happy when my question about Hercules brought a smile to Cornette’s face and he enthusiastically reminisced about the late Ray Hernandez. Of course there is lots of stuff about the WWE, WCW, ECW, and TNA; including a shocking declaration of who he believes killed Owen Hart. Cornette’s beef with TNA writer Vince Russo is clear and brought out in the open by numerous insults and abusive dialogue. Cornette’s hatred for Russo is humorous, and no one in their right mind would take his “threats” seriously. Every man has his breaking point, and Cornette dances around that point with his blood pressure under control. Mr. Jim Cornette is a great guy and always provides a full dose of entertainment, plus a little precious overtime. There never seems to be enough time when Cornette is involved. There should be multiple Guest Bookers, multiple YouSHOOT’s, and many more Jim Cornette/Kayfabe Commentaries projects in the future. We could be SO LUCKY.

If you’re one of the four people in the wrestling business who supports Vince Russo, you’ll hate this DVD, but if you’re everybody else, you’ll love it!

YouSHOOT with Jim Cornette
Available at www.KayfabeCommentaries.com
Courtesy of http://alanwojcik.com

Kayfabe Commentaries might have finally jumped the shark (I’ll give you a moment to get the reference.) YouShoot: Jim Cornette is the best DVD ever produced by the company to date and that may be eclipsed when the “Superstar” Billy Graham Timeline of WWF is released next month. If you are not familiar with the YouShoot concept, here’s a quick synopsis: Take one current or former wrestling person, put them with Sean Oliver and a laptop loaded with fan questions and mix.

If you have no idea who Jim Cornette is then stop reading this and hit your head on the nearest wall until you are out cold. Currently Mr. Cornette has a role in Ring of Honor on and off-camera, but before that he was one of the best talkers in the wrestling business as manager of the legendary Midnight Express (“Loverboy” Dennis Condrey, “Beautiful” Bobby Eaton & “Sweet” Stan Lane) in addition to being part of WWF creative. This is not Cornette’s first time on KC.com DVD (see Guest Booker section of the website listed below) so he is totally comfortable with Mr. Oliver. Cornette answers questions in the following areas: Beginnings in Memphis, NWA/WCW, ECW, WWE, SMW, OVW, TNA, ROH plus the games The Jim Cornette Shit List & Stump Corny (trivia winners won the DVD) take the place of Gym Bag word association and the Blunt Rolling contest.

To the shock of no one Cornette holds nothing back as the teaser videos on the KC.com website showed in previous weeks with their “F#$K You” segments. Cornette utterly despises Shawn Michaels, Vince Russo (big shock to no one), Johnny Ace, Jim Herd, Kevin Dunn (WWE Executive Producer), Mark Madden (former WCW commentator) and David Batista. Surprisingly the normal moron squad of people that submit questions (see previous reviews) is nowhere to be seen, possibly omitted for the interviewee. I should have and didn’t submit a question regarding the OVW slapping of Santino Marella (look it up) and no one else did. Cornette shares his love of wrestling and talent that has come and gone with Oliver who is happiest laughing at Cornette’s Kevin Dunn impression. Cornette would like you to buy his Midnight Express book through www.jimcornette.com and if you want this DVD go to www.kayfabecommentaries.com to also pre-order the Billy Graham DVD mentioned above along with KC Heat Wear.

As it was said, this is the show that broke all the rules, and this is the guest that will do the same. Never will any discussion with Jim Cornette get old. Jim has done hundreds of interviews over the years, but once again his latest & perhaps greatest was conducted by the crew over at Kayfabe Commentaries. This two-disc set & almost four hours of talk will literally fly by, once again leaving you with a fulfillment for so much more. As always, Jim is a straight shooter & pulls no punches, and if he hates anyone in this business, he will tell you! As a matter of fact, Sean Oliver & the crew put together a special chapter titled “The Sh!t List,” where Jim is given dozens of names and has to rank them on that list himself. Between this & “Stump Cornette,” as well as the downloaded fan questions that Kayfabe Commentaries got in (which this time out were much better than previous fans that would goof & gimmick up to be on TV), this edition of “YouShoot” is definitely the best yet.

Nice tight setup with a few cameras, you can’t ask for a better way to conduct an interview. Audio is perfectly clear throughout. Questions by fans inserted are understandable, with the feel & atmosphere captured throughout the video shoot being perfectly produced to the viewer.

What’s On The DVD’s?

Sean Oliver as always begins with the roots of his guest, and lets Cornette give you his stories as to how he saw wrestling & broke himself in. Growing up in the 70’s, Jim always loved professional wrestling at The Louisville Gardens, and will tell you what he though of New York & the most famous wrestling arena in the world, Madison Square Garden, as he was preparing to watch his first live show there on television. Jim will also tell you about the Jarrett’s, plus how he finally broke into the business himself with his journeys through World Class, Mid-South, WCW, & the WWE. Between being a manager, a booker, an owner of Smokey Mountain Wrestling, as well as producer of Ohio Valley Wrestling, Jim will tell you all the stories & dealings with the professional wrestling business, as well as the individuals within. You obviously will get plenty of stories about The Midnight Express incarnations, “Cowboy” Bill Watts, Fritz Von Erich, Jim Herd, Paul Heyman, John Laurinaitis, Vince McMahon, along with all of the people & troubles he has dealt with in the wrestling industry. Want to hear his version of Shawn Michaels & the infamous “Montreal Screwjob” from 1997? Jim will tell you! In addition, after working a few years in TNA with Vince Russo, now Jim can tell you how he truly feels about that relationship. There is so much more to cover & so many hours that were spent with Jim, that by the end of the interview all we can ask is when will Volume II be released?

Anything that can make you want more after plenty that was given is a must have in your collection. When Jim gets to open his mouth on the true workings it becomes very educational & highly recommended to anyone who follows this sport. These are true feelings from real dealings during Jim’s many years in the professional wrestling business.

Buy this DVD. Over 220 minutes of solidly packed wrestling discussion by the best mouth in the business. There is no better way to have a “You Shoot” episode without letting James E. Cornette take center stage.