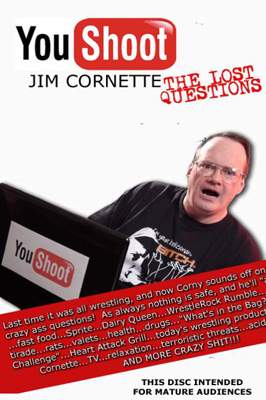 At this point, everyone knows what YouSHOOT is… and if you don’t… you’re an idiot! Kayfabe Commentaries has become BFF’s with the legendary mouthpiece wrestling manager, Jim Cornette, and together they have created some really awesome DVD’s for home release. Cornette first starred in a very insightful Guest Booker DVD, then a controversial YouSHOOT DVD, now there is a second YouSHOOT DVD, and soon there will be a Ring Roasts 3 DVD featuring Jimmy getting roasted by his peers (and some low-rent comedians). One might assume this DVD would include clips from the cutting room floor of the initial four-hour shoot interview, but in fact, it was a completely separate episode taped at a different time and location (and I’m sure Corny got a second paycheck). They decided to do this DVD due to the complaints from fans whose questions were ignored for the first edition. So let the games begin. Cornette goes off on all things wrestling, covering the usual subjects (WWE, TNA, Vince Russo), as well as a bunch of more obscure questions. You simply can’t go wrong with Jim Cornette and Kayfabe Commentaries, so you don’t need me to tell you this product is amazing. Just go out and buy the DVD – you will love it!