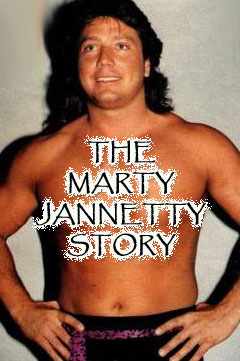 Marty Jannetty, love him or hate him, was always one hell of a talent, but his career was constantly spoiled by seemingly uncontrollable behavior problems. It seems like Jannetty spends most of his time these days denying the absurd stories about him over the years, to the point where he refuses to do radio interviews. The Marty Jannetty Story DVD covers the entire span of Marty’s wrestling career, and recounts his many professional ups and downs. It also chronicles the roller-coaster ride of Jannetty’s personal life. Viewers will get the real story, at least the Marty’s version of the real story, straight from the man himself as he opens up like never before for this great shoot interview from Howard Feintuch – the maker of Shawn Stasiak – DETERMINED.

Disc number one covers many topics, such as; his introduction to professional wrestling, trouble in high school, training with Jerry Oates, his first match and not knowing if it was staged or real, teaming with Tommy Rogers as the Uptown Boys, meeting Shawn Micheals for the first time, signing with the AWA, teaming with Shawn Michaels and coming up with a name for their team, the whole story about the Rockers’ infamous one day stint with the WWF, meeting with Vince McMahon in Stamford to get their jobs back, the Alabama territory, working for AWA/Verne Gagne again and dropping the titles, the rise of the Rockers in the WWF, teaming with the Young Bucks at an Indy show – plus a match, giving post-match advice to the Young Bucks & Diablo, the Rocker-dropper accident/incident, the hotel room brawl with Shawn Michaels involving Roddy Piper and how Randy Savage saved the day, Marty Jannetty vs. Death Row in a bloody hardcore match at an indy event in 2008, the end of the Rockers (including the barber shop incident), dealing with the company’s position to push Shawn ahead of him, disturbing story about watching a rat getting assaulted by a police officer, feuding with Shawn Michaels including their first match on a house show, their match at Royal Rumble and Vince McMahon’s stunning reaction, getting fired by Vince McMahon, getting his job back and winning the Intercontinental title, teaming with the 1-2-3 Kid, and failing a drug test.

Disc number two opened with a thirty minute story of a former girlfriend named Leslie who Marty thought was “the one” until he hashed a plan with Jim Powers to test her loyalty. The relationship took a turn for the bad and it nearly got him killed, and ended like a deleted scene from the TV show “My Name Is Earl.” The punch line was that Marty was arrested, and sprung by Vince McMahon so he could make the European tour. More topics discussed on the second disc include; getting ribbed by Scott Steiner in Europe which indirectly caused him to QUIT the WWF, the downward spiral that followed and not caring about life, critiquing a match and doing a run-in, a match with Dan “the Man” Kobrick, post match comments plus giving some advice to Kobrick, returning to the WWF to team with Al Snow as the New Rockers, quitting the WWF, struggling with depression, dealing with the death of his father, going to work for WCW, JJ Dillon’s promise that he would not get released if he had surgery and then getting released during rehab, a series of unfortunate incidents leading up to getting busted on a DUI, serious thoughts of suicide, taking a phone call that saved his life from Shawn Michaels out of the blue after five years of silence, the amazing story that followed, footage of Marty leading a seminar with twenty wrestling trainees, wrestling an exhibition match with a young kid training to be a pro-wrestler, and a final plea to God.

You can purchase your copy of The Marty Jannetty Story 2-Disc DVD exclusively at www.themartyjannettystory.com/