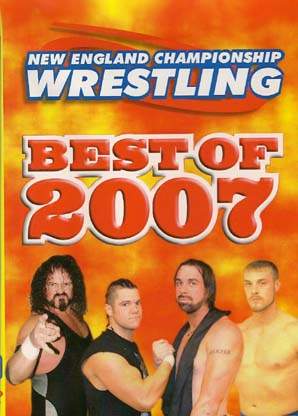 DISC 1 – GAUNTLET MATCH (July 20)
“The Golden Greek” Alex Arion vs. DNA (Scott Reed & Max Bauer & T.J. Richter): The Golden Greek had to defeat all three members of DNA in consecutive singles matches in order to get his brother, Frankie Arion, reinstated in NECW. Arion quickly defeated the ‘weak link’ Scott Reed in roughly five seconds to motor past the first obstacle of this gauntlet. Next up for Alex Arion was big Max Bauer, the Mohawk giant of DNA. It took a lot more time, but Arion eventually defeated Bauer as well – but not after Bauer did his job and wore the Golden Greek down. T.J. Richter jumped in the ring and tried to finish the job that his henchmen started. Despite interference from the other members of DNA, Alex Arion managed to score the victory over Richter to complete the gauntlet and win his brothers job back. Right on cue, Frankie Arion burst through the front door of the building and saved his brother from a post-match beat-down from DNA.

DISC 1 – #1 CONTENDERS (March 24)
“The Real Deal” Brandon Locke vs. Handsome Johnny: If you have never seen Handsome Johnny then don’t bother imagining what he looks like because you will be way off track! Brandon Locke is a young clean-cut babyface adored by the fans. Locke scored a hard-fought victory, slaying the “Handsome” one to earn a shot at the NECW Television title.

DISC 1 – WORLD WOMENS WRESTLING NON-TITLE MATCH (July 20)
WWW Champion Tanya Lee w/Sean Gorman vs. Lexxus: One of the many things that sets NECW apart from all the other promotions is the presence of some pretty well-trained female wrestlers. In fact, NECW has a whole division dedicated to the girls called World Women’s Wrestling, which puts on all-female events from time-to-time. WWW champion Tanya Lee and challenger Lexxus are a couple of little cuties weighing about a hundreds pounds a piece, but don’t let their appearance fool you. Both are well versed in the physical and psychological aspects of professional wrestling. Lexxus is the classic fresh-faced good girl (every boy’s dream), while the loudmouth Tanya Lee wears badass leather pants and is hated by fans everywhere! Everybody’s favorite sweetie, Lexxus, picked up an important Non-title victory over the WWW champion, Tanya Lee.

DISC 1 – MATCH (October 27)
“The Human Nightmare” Evan Siks vs. “The Talent” T.J. Richter: Before the match, the insane Michael Sane came up on the big screen to give Evan Siks a disturbing warning. The long-haired dirtbag known as T.J. Richter doesn’t look like he would match up evenly with Evan Siks – or anybody for that matter – but he went toe-to-toe with the much larger Human Nightmare. Evan Siks lifted Richter up for his finishing move, which he “dedicated” to Michael Sane. However, Sane’s face popped up on the big screen, and his voice crept onto the sound system long enough to distract Siks and allow Richter to pick up a fluke victory!

DISC 1 – #1 Contenders Match (January 28)
“Straight Edge” Brian Fury vs. D.C. Dillinger w/Tanya Lee: The intensely hated D.C. Dillinger was accompanied to the ring by a devilishly sexy Tanya Lee for this match against his biggest NECW rival. Brian Fury had been assaulted by Dillinger prior to this match, but decided to compete despite everybody trying to talk him out of it. Fury had a brief rush of adrenalin at the beginning of the match but was inevitably overwhelmed by the unsympathetic Dillinger. Fury fought the rest of the match using mostly his own instincts while putting his threshold for pain to the test. Fury started bleeding from the mouth when he was locked into a basic abdominal stretch. Fury fought out of it and connected with a super-kick but could only get a 2-count. Fury ended up in the abdominal stretch again, and started to look like Pennywise from the Stephen King movie “IT.” Fury eventually passed out and the referee dropped his arm three times and called for the bell, awarding the GENESIS 6 title match to D.C. Dillinger.

DISC 1 – TV TITLE ELIMINATION SCRAMBLE (February 24)
“The Talent” T.J. Richter (Champion) vs. “The Exotic” Kristian Frost vs. “R.I.O.T.” Kellen Thomas vs. “Sensational” Scott Reed vs. Triplelicious: NECW Television champion T.J. Richter had his work cut out for him, being forced to face the four top contenders for the NECW TV championship in an elimination match. Kristian Frost has a stripper gimmick, but gets offended when fans throw coins at him. Kellen Thomas uses the nickname RIOT, which to my understanding stands for “Revolution In Our Time.” Triplelicious pinned Scott Reed for the first elimination of the match. Kristian Frost destroyed Kellen Thomas with a sick Russian Leg-sweep DDT for the second elimination of the match. T.J. Richter went for a move off the top rope, but Alex Arion ran out and pulled him down by the leg. Richter was then counted out of the ring by the referee, thus eliminating the NECW Television champion! Richter grabbed his belt and took off. After a couple minutes, Kristian Frost defeated Triplelicious and was awarded the NECW Television title.

DISC 1 – NWA TITLE TOURNAMENT MATCH (June 16)
Claudio Castagnoli vs. Pepper Parks: These two guys are not NECW regulars, but NECW fans were treated to an NWA showcase featuring two very popular outsiders. Pepper Parks is from the New York circuit, and works for companies such as NWA Empire and NWA Upstate. Claudio Castagnoli, on the other hand, has worked all over the world, but is most known for his long stint on the Ring of Honor roster. This was a solid match, which ended with Claudio hitting the Ricola-bomb to win the match and advance in the NWA Heavyweight championship tournament.

DISC 1 – NWA TITLE TOURNAMENT MATCH (June 30)
Fergal Devitt vs. Mikey Nichols: After the NWA dropped its sanctioning of TNA, they needed to find a way to crown a new NWA World Heavyweight champion. A tournament was set up and matches took place all over the country, including two bouts that took place in New England Championship Wrestling. This match was double-special because it had some international flavor, as Devitt is from Ireland and Nichols is from Australia. The match sort of started slow but actually ended quite good with a nice finish. Ireland’s Fergal Devitt advanced to the next round of the NWA World title tournament. The international rising stars shook hands in a demonstration of respect after the match.

DISC 2 – LAST MAN STANDING / LOSER LEAVES NECW (March 24)
“Hurricane” John Walter vs. Jason Blade: Last year I reviewed NECW Best of 2006, which covered the early stages of the epic feud between Blade and Walters. In that review I remarked, “eventually ending in a big “Loser Leaves NECW” match – but you’ll have to wait until NECW: Best of 2007 to hear about that one.” Well my prediction has come true, and the wait is finally over. The issues between Blade and Walters became deeply personal during the first few months of 2007. So much so, that it became clear that there wasn’t enough room in NECW for the two of them. Both of these guys have spent time in Ring of Honor, and John Walters actually held the now-unified Pure Wrestling title. As if the Last Man Standing and Loser Leaves NECW stipulation wasn’t dramatic enough, they also introduced a huge ladder into the bout to inflict maximum punishment on one another. Both men were cautious yet brutal with their offense, not wanting to make that crucial mistake. After thirty minutes of action, it wasn’t a mistake, but pure exhaustion which put John Walter down for the 10-count. Jason Blade wins the match, and drives John Walters out of NECW for 90 days.

DISC 2 – RETURN CHALLENGE MATCH (April 21)
“Die Hard” Eddie Edwards vs. “The Infamous” Bobby Fish: These two are so evenly matched that they went to a 20-minute draw the previous month. This would be the rematch and the time limit was extended to thirty minutes. I wouldn’t have been surprised if they went to another draw, but NECW doesn’t pull tricks like that…. or do they? Their NECW rivalry isn’t the only thing Fish and Edwards have in common; they both work for Pro Wrestling NOAH in Japan, too. The first twenty nine minutes went by relatively fast, and the final minute consisted of Bobby Fish chasing Eddie Edwards around the ring to run out the clock. Edwards slid into the ring and Fish followed, and with five seconds left Fish made the cover and scored the 1-2-3 to win a phenomenal match! This was a dynamite performance worthy of headlining a DVD by the name of “NECW Best of 2007”..

DISC 2 – BONUS FEATURES: As usual, NECW has also provided some bonus material to make their great DVD even better. Here you can watch highlights from the 1/23 episode of NECW.TV featuring a recap of the feud between D.C. Dillinger and Brian Fury. Plus a post-GENESIS promo from Sabotage on 2/24 and the following six person tag team challenge – Evan Siks & Big Rick Fuller & Nikki Roxx vs. Sabotage (DC Dillinger & Eddie Edwards) & Tanya Lee.

CONCLUSION: You can watch exclusive episodes of NECW Television at NECW.TV or you can check out the selection of New England Championship Wrestling and World Women’s Wrestling home release DVDs at www.necwwrestling.com and www.worldwomenswrestling.com.