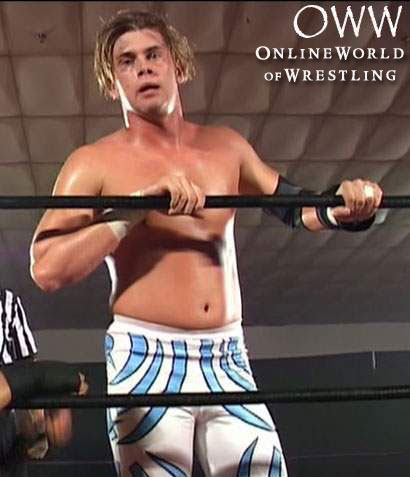 IN THE RING: The show started with an appearance by former WWE developmental wrestler Kevin Matthews. Now Kevin is either the biggest jerk in the world, or he does a great job playing one in the world of professional wrestling. Kevin is the General Manager of PWL, so he booked some matches and talked about the show.

TAG TEAM MATCH
The Best Around vs. Pretty Dangerous: My biggest beef with independent wrestling DVD’s is when they are too lazy to add a commentary track. I understand the technical difficulties of doing it live, but there is no excuse for it not to be done in post production. This match features four young jobbers paying their dues trying to impress their peers, their employers, and their fans. This was nothing special, but a decent opener.

SINGLES MATCH
Vin Gerard vs. JC Wrestler: The big negative to not providing commentary for an indy DVD is that the viewer may not be familiar with the wrestlers, so he/she has to pay attention to the ring introductions in order to keep track of who’s who. I have heard a lot about Vin Gerard, but this would be my first time seeing him work. I have to say I immediately noticed that he has a great deal of charisma, and this was almost two years ago – so I bet he’s fantastic now. JC Wrestler is your typical high-flying indy babyface who could have potential, but isn’t realizing it at this point of his career. Gerard was clearly the ring general, and taught the spot-monkey a lesson on his way to victory!

INTERGENDER MATCH
Rhett Titus w/Billy Reil & Reyna Fire vs. Daizee Haze: Before the match, long-time wrestler turned manager Billy Reil spent some time on the mic building up some heat for his little group. You know, many young wrestlers take lots of time searching for a good gimmick to help them get over (and often come up on the short end). ROH graduate Rhett Titus developed an over-the-top party-time Playboy gimmick and then turned the volume way up – almost too much. Titus pulled off one of Ravishing Rick Rude’s old tricks by air-brushing Daizee’s face on the back of his wrestling tights. The Haze was not impressed with this unauthorized use of her image in such an unsavory location. Haze went right after Titus, but he simply swatted her away like a fly more than once. The manager tried to get involved, but it back-fired and he ended up costing Titus the match. Haze took out the spicy-hot Reyna Fire after the match!

TAG TEAM MATCH
Lince Dorado & Ophidian vs. The Gym Rats: Lince Dorado & Ophidian are a couple of Chikara guys, and anything associated with Chikara has to be good. The Gym Rats looked like they could spend some more time in the gym if you ask me. They were calling the masked Chikara duo the Osirian Portal, but to my knowledge the Osirian Portal is Ophidian & Amasis. Either way, they won the match, but they were destroyed by a couple of unidentified beefy heels afterwards!

SINGLES MATCH
Corvis Fear vs. Ethan Page: Corvis Fear came out and tried to intimidate the fans by staring at them, but I think that always makes a wrestler look foolish because now-a-days the fans won’t sell it. Regardless of this, Fear was the superior athlete and because of that he left with his arm raised.

SIX MAN TAG TEAM MATCH
John McChesney & Billy Bax & Jason Static vs. Danny Demanto & Kryptic Keegan & EZ-E: This match featured six guys who look like life-long independent wrestlers. They are decent in front of a small crowd but will never make it to the big time (prove me wrong, boys). Case in point; Danny Demanto… I never really understood what the big deal is about him, but he seems to be all over the New Jersey circuit. Once again I didn’t really know who was who, except for Demanto because he got his own entrance. They worked the match and bumped for the fans before the good guys came out on top! The good guys being the team that doesn’t include Danny Demanto.

EIGHT MAN TAG TEAM MATCH
Jimmy Rave & Alex Shelley & John Walters & Shannon Moore vs. Delirious & Azrieal & Rob Eckos & Jason Cage: I guess they took all the stars and put them in the main event. If I were booker I would have spread them out over the entire card, but I’m sure there was rhyme and reason for everything. It started out with Jimmy Rave and Azrieal standing in the ring picking their teams for an elimination match. The teams went back and forth, trading eliminations until it came down to Delirious against Moore. Shannon Moore finished off Delirious and won the match for his team. Good fun.

Here’s a music video covering the event from YouTube..

FINAL VERDICT: Pro Wrestling LIVE put on a good effort with a wide range of talent. The product isn’t really made for DVD, but if it’s the only way to see the matches then by all means pick up a copy and enjoy the action. Otherwise I would encourage fans to attend the shows live and I promise you have a good time!

PLUG: Pro Wrestling LIVE has an event called “The Rising” coming up on August 8th at the Elk’s Lodge in Long Branch, New Jersey. The card features Paul Burchill, Ken Doane, Sonjay Dutt, Jimmy Rave, and headliner Davey Richards. Tickets are $20 at the door and it promises to be a big night full of great action!