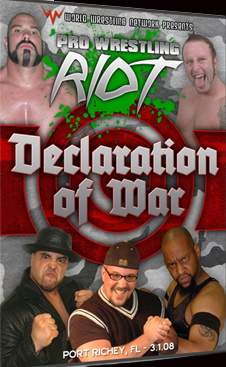 IN THE RING
Ron Niemi & 911 Inc.: Ron Niemi led his heel troop of Kory Chavis, Frankie Ciatso, the Shane Twins, and two skinny jobbers named Shayne Swift & Myles Long to the ring to open the show “RAW-style.” Niemi talked about the I QUIT match tonight between Chavis & Ciatso and Sideshow & Bruce Santee. Niemi praised each member of his group, and then addressed the two skinny jobbers who came out with them. Niemi said he has been known to lead a lamb to slaughter, and basically told the Shane Twins to “get’em!”

TAG TEAM SQUASH MATCH
The Shane Twins w/Ron Niemi vs. Myles Long & Shayne Swift: This was exactly what Ron Niemi said it would be, a complete slaughter. After the Shane’s were finished with the two skinny jobbers, the rest of 911 Inc. jumped in the ring to join in the beat-down until Bruce Santee & Sideshow made the save! Santee & Sideshow told the Shane Twins, who wrestled for WWE as Gymini, that they weren’t a couple of “f*ggots, like London & Kendrick.”

SINGLES MATCH
Lou The Fixer w/George Martel vs. Ray Beez w/Mr. Milo Beasley: I will never understand why someone would take a big hairy beast like Lou The Fixer and put him in shiny red wrestling gear. This guy should be wearing dirty ripped blue jeans with knee pads on the outside. Ray Beez, on the other hand, has embraced his homeless guy gimmick by wearing dirty old clothes from head to toe, carrying a “will wrestle for food” sign and a trash can. Before the match, George Martel offered Beez a lot of money to join the House of M. Beez took the money and gave it to his wheelchair-bound cousin, Milo Beasley. Beez smashed Lou The Fixer with a trash can while Beasley jumped out of his wheelchair and ran away with the money under his arm! Beasley came back empty handed and helped Beez battle the Fixer for several minutes, before House of M monster Damballah appeared. Eddie Taurus hit the ring soon after while Beez & Fixer disappeared behind the curtain.

SINGLES MATCH
Damballah w/George Martel vs. Eddie Taurus: I love how once in a while one match will suddenly morph into another without missing a heartbeat. A few minutes into the match, Ray Beez and Lou The Fixer reappeared at the merchandise table still brawling. TNA should watch Pro Wrestling RIOT and find out the true meaning of total nonstop action. Beez and the Fixer ended up back in the ring. A couple additional referees showed up to help restore order, but the House of M destroyed them and the match (both matches) were thrown out and ruled a No Contest.

SINGLES MATCH
Kenny King (w/Chasyn Rance & Mr. Saint Laurent) vs. Jaison Moore: I am so much happier to see Mr. Saint Laurent as a mouth-piece instead of a wrestler. Kenny King is somebody who a lot of insiders have big hopes for in the wrestling business. King complained about the finish of his match with Jaison Moore at Uncontrollable and demanded that the match be stricken from the record. King challenged Moore to another match, calling it “a first time ever match” – you know, since the other one never happened. King dominated the match, until Sedrick Strong came out and introduced his new partner, from the Kiwi chapter of the Delta Iota Kappa – Bushwhacker Luke! It’s funny that Luke seems to be popping up everywhere on the indy circuit. Sedrick & Luke marched around ringside distracting Kenny King long enough for Jaison Moore to score the 1-2-3 to win the match! Luke is great, even if he does charge little kids $5 to take his picture…

SINGLES MATCH
Jerrelle Clarke vs. Nooie Lee: Jerrelle Clark is one of those guys who will always put on a good performance, but he has reached his peak as a professional wrestler. I’ve seen the name Nooie Lee on the internet many times, but I did not know he was Asian until now. I guess I never thought about it too much. Lee made a good opponent for Mr. 360 on this night. They wrestled an entertaining cruiserweight-style match, which ended with Jerrelle Clark continuing his winning streak in Pro Wrestling Riot!

BATTLE OF THE BULLS
Erick Stevens vs. Jon Davis: The previous match took to the air, and this match took to the mat for some high-impact action. Stevens and Davis hit each other so hard it actually knocked the wind out of ME, and I was just watching it on my TV. I have a feeling the purpose of this match was to test Jon Davis and elevate him to the next level. The Battle of the Bulls ended with former FIP World champion Erick Stevens coming out ON TOP!

TAG TEAM I QUIT MATCH
Bruce Santee & Sideshow vs. 911 Inc. (Kory Chavis & Francisco Ciatso w/Ron Niemi): They kinda gave away the finish earlier on the card when Sideshow introduced his cute little sister, Danielle, sitting in the crowd supporting her big brother. I thought, “why else would she be there unless it was her big brothers last match?” So I confidently predicted that it would be Sideshow saying the words I QUIT before it was all said and done. There’s no way I could have predicted what else was about to happen. After some chaotic brawling all over the arena, Bruce Santee ended up hopelessly hand-cuffed to the ring post. Chavis & Ciatso gave Side-show a Spike Pile-driver, but could not secure a victory! They set up Sideshow on a table and prepared to end his career, but just then Sideshow’s little sister (Danielle) entered the ring and tried to stop them! The Shane Twins came out and dragged Danielle around the ring by her beautiful long brown hair. One of the Shane boys threatened to Power-bomb Danielle through the table, causing Sideshow to scream “leave her alone, I QUIT!!!” to save her. This was the intended response, but the Shane went ahead and Power-bombed sweet Danielle through the table anyway – and damn, did he murder her! She was bent in half at the shoulder and she must have had a bad case of whiplash the next day if her neck wasn’t broken. 911 Inc. celebrated in the ring like a bunch of frat boys, as Bruce Santee (still hand-cuffed) screamed for help from the back. This generated a mountain of heat for 911 Inc. as fans were literally losing their minds as the heels exited the scene. While Danielle was being looked at in the ring, Santee got free from the cuffs and chased 911 Inc. with a chair. Sideshow was shown crying in the ring, saying “Danielle, I’m sorry!!” Santee came back and yelled at promoter Sal Hamaoui, “Sal, this stuff isn’t supposed to happen!” Someone else yelled “somebody call the police!” That’s when I knew it was part of the show. Sideshow picked up Danielle and carried her backstage sobbing the whole way. Nobody would do that if it was REAL. Santee was the most offended by what happened, and cut a promo on 911 Inc. in the camera threatening violent revenge. What a hot angle played out in the RIOT ring. The booking in Pro Wrestling RIOT is second to none!

AFTER THE MATCH: The House of M (Lou The Fixer & Damballah w/George Martel) came out and attacked Bums R’ Us, but then all the babyfaces ran out and kicked them out of the ring. Sideshow was there and said his little sister was in the hospital and it was his fault. Several wrestlers consoled him, including Luke Williams licking him Bushwhacker-style! Sideshow cut a promo on 911 Inc. saying he was making it personal and warned them to watch their backs because they never know when he was coming after them!