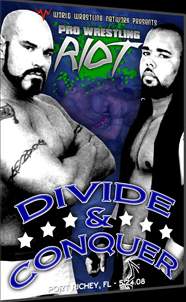 SINGLES MATCH
Scott Davis vs. Nooie Lee: The show started with the sounds of Joe Esposito belting out the blood-pumping tune of “The Best Around.” Anybody who grew up in the 80’s and watched the Karate Kid movies, gets an adrenaline rush whenever they hear that song. Unfortunately the song paved the road for arrogant heel Scott Davis to come to the ring. Scott is related to the Davis tag team known as the Heartbreak Express. His opponent was the high-flying Nooie Lee. Some people might say I’m crazy, but Scott Davis kinda reminds me of Steve Austin when he was the Ringmaster in the WWF. Thankfully, the Ringmaster won the match so we could listen to Joe Esposito again!

IN THE RING
911 Inc. (Ron Niemi & Kory Chavis & Jon Davis & Francisco Ciatso): Last month Ron Niemi and his 911 Inc. faction won a match which forced Sideshow out of PWR for the next 90 days, so they were flying high tonight bragging about their dastardly accomplishment. I love 911 Inc’s entrance music, “Figured You Out,” by Nickleback, but it doesn’t exactly fit the philosophy of the group. Ron Niemi cut a long promo praising his men and threatening anybody who decided to get in their way!

SINGLES MATCH
Francisco Ciatso w/Ron Niemi vs. C.J. O’Doyle: Wild Samoan trainee C.J. O’Doyle came out looking like Gene Snitsky Jr. to officially make his stand against the evil 911 Inc. faction. Speaking of 911 Inc., Kory Chavis & Jon Davis, were allowed to remain at ringside for some reason. Francisco Ciatso got a little help from his friends on his way to stealing a victory over young C.M. O’Doyle..

TAG TEAM MATCH
Team Vision (Chasyn Rance & Mister Saint Laurent) vs. Keith Blonde & Fantastic Dantastic: I’ve said it before, and I’ll say it againt; I’d much rather see Mister Saint Laurent as a full-time mouthpiece as opposed to an in-ring performer. Laurent cut a promo before the match, insulting the fans, and promising to teach them a lesson in respect. Laurent said the lack of respect from the fans doesn’t bother him, but the lack of respect from the PWR office does! On behalf of Team Vision, Laurent demanded some quality competition. Suddenly two super jobbers named Keith Blonde and a masked Fantastic Dantastic answered the open challenge. After some toying around, Team Vision scored the victory to rise a little higher up the ranks of the PWR tag team division.

SINGLES MATCH
Kory Chavis w/Ron Niemi vs. Sedrick Strong: 911 Inc. attacked and destroyed Sedrick Strong during his entrance, causing the referee to cancel the match. Ron Niemi took advantage of another opportunity to rant and rave on the microphone again. Niemi asked Davis & Ciatso to go to the back and find a willing and able opponent for Kory Chavis. They found skinny pale jobber named Miles Long and dragged him unwillingly out to the ring and threw him in to get systematically eaten alive by Chavis!

ANYTHING GOES TAG TEAM MATCH
Bumz R’ Us (Ray Beez & Mr. Milo Beasley) vs. The House of M (Lou The Fixer & Damballash w/George Martel): George Martel hit the ring raving mad about still not getting his money back from Bumz R’ Us. Ray Beez & Milo Beasley showed up and a very intense brawl began throughout the arena. Lou The Fixer & Damballah dominated the Bumz until Beasley used a testicular claw to turn the tables on Damballah. The Fixer and Beez ended up outside fighting on the lawn. Beasley dove out of the ring towards Damballah, but a big fat blob security guard named Raymond Snow bashed him with a chair! The entire House of M faction, now consisting of four monsters, ganged up on Milo Beasley in the ring as George Martel yelled “where’s my MONEY?” Eventually Ray Beez hit the ring to save his Bumz cousin. No official finish was recorded. After the match, Ray Beez challenged the House of M to a six man tag at the next show for the briefcase with the money inside if George Martel puts his job on the line. Martel accepted the match!

TEXAS TORNADO TAG TEAM MATCH
The Lifeguards (Daron & Wade) vs. The Heartbreak Express (Sean & Phil Davis): I’m not sure if I would have personally booked two chaotic tag team brawls on the same card, let alone one after the other. At least this one wasn’t as ugly as the previous tag team match. It wasn’t quite as spectacular either, ending a little flat – with Amy Vitale sending in Scott Commodity and an unhappy Austin Andretti to help the Heartbreak Express gain victory. Sean & Phil Davis celebrated with their sexy new manager after the match.

SINGLES MATCH
Jaison Moore vs. Austin Andretti w/Amy Vitale & Club Vitale: Austin Andretti is a reluctant member of the new Club Vitale faction, and has been abused by manager Amy Vitale. I’ll never understand why all these big factions get to stay at ringside for these kinds of matches. Jaison Moore is a glorified jobber, and shouldn’t last two minutes with a guy like Austin Andretti. Instead, the match lasted 15 minutes before Andretti refused to use Amy Vitale’s purse as a weapon – then lost focus long enough to give up the pinfall and hand Jaison Moore a rare victory! Of course, the rest of Club Vitale was pissed at Andretti, and Amy screamed at him until he stood up to her and QUIT the group! Andretti turned his back and was attacked by the Davis boys and Scott Commodity until the Lifeguards and Jaison Moore made the save. What? All of a sudden, Jaison Moore is a Superstar?

GRUDGE MATCH
“The Marquee” Bruce Santee vs. Jon Davis w/Ron Niemi & 911 Inc.: Jon Davis was given the task of eliminating 911 Inc.’s biggest threat, crowd favorite Bruce Santee. Both men butted heads during the introductions, as the lame referee attempted to keep them from a pre-mature eruption. The rest of 911 Inc. lurked around ringside; meanwhile, all of Bruce Santee’s allies have been previously taken out by Ron Niemi’s troops. 911 Inc. could not resist the urge to interfere, and Bruce Santee found himself at a major disadvantage. The frustrated commentators voiced their displeasure with Ron Niemi and his band of evil doers. Santee miraculously turned the tables with a stiff Lariat and scored a surprise pinfall to win the match! Immediately, the 911 guys jumped in the ring and put the boots to Santee until Sedrick Strong, C.J. O’Doyle, the Lifeguards, and some others made the save! Finally PWR has banded together to stand up to 911 Inc.!

For more information on PWR, go to www.ProWrestlingRiot.com today