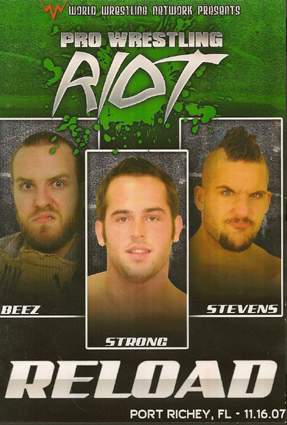 INTRODUCTION: Pro Wrestling Riot is the runt baby brother of the Full Impact Pro promotion, which I consider the baby-sister of Ring of Honor. It’s all about one big happy family. The PWR crew has gotten REALLY good in a REALLY short period of time. Barely anybody knows about them, and that’s a shame, because I think a lot of wrestling fans would enjoy the PWR DVD’s. The ring announcer was Jonathan Gold of FIP fame. The commentators were Ron Neimi & Jake Cerrone, filling in for Aaron Royal who was protesting the actions of 911 Incorporated on the last show.

VIGNETTE
Team Vision (Chasyn Rance & Mister Saint Laurent): The DVD started with Team Vision hanging out around the pool tanning. Laurant has a Blue Meanie body and a knack for cutting phenomenal promos. Laurent ranted about getting swarmed by women everywhere they go, even though they abstain from sex for six-to-eight weeks before every match. One really hot girl with no boobs approached the pair and started rubbing lotion on both men, despite Laurent’s protests. He must be gay.

IN THE RING
Bruce Santee + 911 Incorporated + Sideshow: Bruce Santee started the live show all fired up and challenging “The Hardcore Giant” Ron Neimi to get his ass out to the ring so he can get revenge for what they did to Amy Love last month. Neimi came out with Frankie Ciatso & Rod Steel backing him up. Ron Neimi made some comments about Santee’s wife, Amy Love, and Santee immediately snapped. Ciatso & Steel attacked Santee until a guy named Sideshow made the big save! Sideshow issued a challenge to 911 Inc. and manager Neimi accepted, but only on HIS terms. This was a hot start to the show.

TAG TEAM MATCH
The Lifeguards (Daron & Wade) vs. Club 305 (Austin Andretti & Scott Commodity): The team of Club 305 was without their lovely valet, Amy Vitale, due to a stipulation which banned her from ringside. The Lifeguards are a serious babyface tag team but I have to laugh when they come to the ring to the old Baywatch theme song. It was a fast-paced exciting tag team match that ended with the Lifeguards hitting a double-team Baywatch-bomb on Scott Commodity for the win! This is the perfect match to open a night of wrestling and get the fans out of their seats.

IN THE RING
Delta Iota Cappa (Joshua Masters & Sedrick Strong w/Fetish) + Team Vision (Kenny King & Chasyn Rance w/Mister Saint Laurent): D.I.C. is babyface tag team with a freakishly sexy valet named Fetish. D.I.C. said they had something on their mind, and challenged Team Vision to a tag team match. Team Vision, Kenny King & Chasyn Rance with manager Mister Saint Laurant, came out and refused the challenge choosing to take the night off instead. D.I.C. issued another challenge, and allowed Team Vision to call the shots. Laurent agreed and set up singles matches King vs. Strong, Rance vs. Masters, and added Laurent vs. Fetish! The crowd chanted “Fatty!” at poor Saint Laurent. He might as well have replied, “I’m not fat I’m just big boned!”

D.I.C. vs. TEAM VISION CHALLENGE – MATCH #1
Kenny King (w/Mister Saint Laurent & Chasyn Rance) vs. Sedrick Strong (w/Joshua Masters & Fetish): After a few minutes of action, Mister Saint Laurent chased poor little Fetish around the ring and backstage – and that was not a pretty sight. Joshua Masters also ended up backstage, leaving Sedrick Strong to deal with Kenny King and outside interference from Chasyn Rance. Team Vision picked up a tainted victory in the first bout of the three match series.

SINGLES MATCH
Kory Chavis vs. Eddie Taurus: Kory Chavis seems to pop up everywhere in Florida. He has really cleaned up his image and slimmed down a lot, looking considerably less menacing than he used to. Eddie Taurus has apparently been around the pro-wrestling scene for a very long time, but he doesn’t do anything for me. A few minutes into the match, manager George Martel made his way down to ringside. The announcers began questioning where Damballa (Martel’s monster) was hiding. Eddie Taurus managed to out-wrestle the larger Kory Chavis, but could not put the big man away. I was led to believe George Martel would factor in the finish, but he managed to mind is own business around ringside. Chavis finally managed to score the victory to put an end to this classic wrestling match. It’s not what you’d expect from a guy like Kory Chavis.

SINGLES MATCH
Jon Davis vs. Jaison Moore: This was a rematch from the four-way fray at Starting a Riot. Jaison Moore was a total jobber when I saw him in Full Impact Pro, but he is taken way more seriously in Pro Wrestling Riot. Jon Davis is a physically thick Cruiserweight with a good look for pro-wrestling. He was also trained by Dory Funk Jr. at the world famous Funking Conservatory. For the second match in a row, manager George Martel was seen lurking around ringside, obviously looking to increase the membership in his stable. There was a scuffle at the end of the match, and the referee got a thumb in the eye – temporarily blinding him. Jon Davis capitalized and scored the 1-2-3 to win the match! The question was whether or not Jon Davis purposely poked the referee in the eye to gain an advantage.

SINGLES MATCH
Jack Evans vs. Jerrelle Clark: No Florida independent promotion would be complete without Jerrelle Clark, an exciting high-flying star with seemingly no desire to venture outside the Sunshine State. Jack Evans, on the other hand, is a well traveled dare-devil spot junkie with an cult following. After a high speed contest filled with intense action, Jerrelle Clark managed to score what I would consider an upset victory over Jack Evans. After this great match, both men showed some refreshing sportsmanship by congratulating each other in the middle of the ring.

TAG TEAM MATCH
Bruce Santee & Sideshow vs. 911 Inc. (Frankie Ciatso & Rod Steel w/Ron Neimi): This match started when a brawl broke out during the intermission. The intense heat that has developed between Bruce Santee and Ron Neimi’s 911 Incorporated boiled over in this tag team match. After a while, the chaos came to a peak when Frankie Ciatso blatantly knocked out the referee! Inside the ring, Sideshow got his hands on manager Ron Neimi. Suddenly, Mike Shane (one half of the Shane Twins, aka Gymini) appeared out of nowhere and attacked Sideshow. 911 Inc. issued a brief beat-down before Bruce Santee chased them away with a steel chair. The referee ruled the match a no contest. In the words of commentator Jake Cerrone – This war is not over yet.

D.I.C. vs. TEAM VISION CHALLENGE – MATCH #2
Chasyn Rance (w/Mister Saint Laurent & Kenny King) vs. Joshua Masters (w/Sedrick Strong & Fetish): It feels like the show could have ended after the last match and everybody could have gone home satisfied, but this card has three more matches! Team Vision manager, Mister Saint Laurent, is what I would call “hideously entertaining.” I’m copying righting that one! The last time I saw Joshua Masters it was during the early days of FIP, and he was aligned with C.M. Punk’s heel faction known as the New Dawn. His attitude has gone from dark and negative to charming and positive since that time. The announcers spent a lot of time hyping the impending match between Fetish and MSL. Ron Neimi repeatedly claimed that Fetish had been stalking Laurent for months. The heels repeatedly interfered on behalf of Chasyn Rance, while Sedrick Strong desperately attempted to play defense. Strong decided to fight fire with fire and interfered on behalf of his partner, and helped Joshua Masters secure a victory.

D.I.C. vs. TEAM VISION CHALLENGE – MATCH #3
Mister Saint Laurent vs. Fetish: After the finish of the previous match, bedlam broke out when all four men brawled all the way back to the dressing room, leaving the lovely Fetish and not-so-lovely Saint Laurent to compete in their scheduled 1-on-1 match (hopefully) without outside interference. Fetish clearly didn’t want to wrestle MSL, but I figured the only thing she had to worry about was his deathly offensive odor. As the four male wrestlers reappeared from behind the curtain, Larent passed on the MSL driver when he had the chance and instead gave Fetish a disgusting kiss on the lips. The announcer shouted, “Oh great now she has to get tested!” Delta Iota Cappa slipped into the ring and hit Laurent with their finisher, allowing Fetish to score the 1-2-3 to win the match! Way to go, Fetish – call me!

TRIPLE THREAT MATCH FOR THE FIP WORLD TITLE
Roderick Strong vs. Erick Stevens vs. Ray Beez (w/Mr. Milo Beasley): Ray Beez’s gimmick is that off a homeless guy carrying a cardboard sign that says “Will Wrestle For Money.” That explains why the formerly homeless “wheelchair-bound” Mr. Milo Beasley is his manager. Ray Beez is actually Milo’s cousin, Raymond Beasley III. What happens in the streets, stays in the streets – right? Both Erick Stevens and FIP World champion Roderick Strong were more polished than the dirty Beez. After such a long show with so many matches that were given lots of time, this match felt like it ended way too early. It was a good match while it lasted, until Roderick Strong nailed his rival Erick Stevens with a Gibson-driver to win and retain his FIP championship.

CONCLUSION: One of the best things about these PWR DVD’s, and something I want to make note of, is the commentary of Ron Neimi. Neimi is an incredible announcer, with a classic voice, and a verbal energy that is unmatched. I could definitely see him making it to the big-time as a broadcast announcer. This DVD was over two and half hours and filled with some of the best independent wrestling on the market.