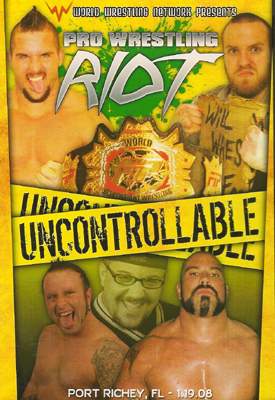 SINGLES MATCH
Lifeguard Daron w/Wade vs. Scott Commodity w/Club 305: The devilish Amy Vitale escorted the Club 305 entourage, which included Scott Commodity, Austin Andretti, and Logan Fernandez, to the ring for a two-match series with Daron and Wade of the Lifeguards. Vitale had a purse over her shoulder, and you just know she had something in there that is slightly more lethal than lipstick and tampons. Lifeguard Daron seriously needs to hit the gym immediately. Late in the match, Fernandez tried to interfere but Daron knocked him down. Andretti then tried to interfere but Lifeguard Wade took him down. Amy Vitale got up on the ring apron and distracted everybody, and directly led to Commodity making a come back and scoring the tainted victory over Daron.

SINGLES MATCH
Lifeguard Wade w/Daron vs. Austin Andretti w/Club 305: After the post-match chaos from the previous contest settled, the scheduled match between Andretti and Lifeguard Wade got started without delay. It was a short match that ended with Wade getting the victory and evening the score with Club 305. After the match, the Heartbreak Express hit the ring and attacked the Lifeguards. Delta Iotta Kappa (Joshua Masters & Sedrick Strong) and Fetish ran out from the locker room to make the save!

SINGLES MATCH
Lou The Fixer w/George Martell vs. Shayne Swift: Lou The Fixer is one scary son of a gun. I don’t know where they found 150 pound Shayne Swift, but he looked like something the Fixer might spread on his toast in the morning. Swift was billed from Beverly Hills 90210, but he was a long way from Castle Walsh. Lou squashed the little guy, but then ordered the Fixer to continue the assault. Eddie Taurus hit the ring to fight the Fixer, but the equally scary Damballah attacked Taurus from behind!

SINGLES MATCH
Damballah w/George Martell vs. Eddie Taurus: Once again, one match morphed into another without missing a heartbeat. It looks like George Martell is running a modern day version of WCW’s Dungeon of Doom! Eddie Taurus is your classic babyface underdog independent wrestler. The match ended in a disqualification when the two hungry monsters, Damballah and Lou the Fixer, just lost control and tried to hurt Mr. Taurus. A couple of other wrestlers hit the ring and the two monsters ate them alive as well.

TAG TEAM MATCH
Team MACKtion (Kirby & T.J. Mack) vs. Scott Davis & Michael Patrick: Scott Davis & Michael Patrick share the same heel demeanor as Arn Anderson & Tully Blanchard – I like it. Team MACKtion has been around the independent circuit for quite a few years and have picked up a great deal of experience for a couple of skinny junior heavyweights. A few minutes into the match, the commentators stated that Davis & Patrick want to be known as a new version of the Andersons, so my previous statement should make them happy. The Mack boys know how to electrify their audience, and did so with a victory over their larger opponents.

TAG TEAM MATCH
Delta Iotta Kappa (Joshua Masters & Sedrick Strong w/Fetish) vs. The Heartbreak Express (Sean & Phil Davis): The chronically irritating Heartbreak Express continue their reign of terror in Pro Wrestling RIOT. Fetish is the kind of girl that every guy has the hots for, but would never admit it (unless they were writing an anonymous DVD review on an internet website). Sean Davis is as good as anybody on the independent circuit at generating that old school heat. Team Vision (Kenny King & Chasyn Rance) showed up at ringside to cause problems for Delta Iotta Kappa. Despite the outside interference from Team Vision, the D.I.K. team was on its way to victory when Kenny King jumped in the ring and attacked them with a crutch causing the disqualification. Suddenly the HBE, Team Vision, and Club 305 were assaulting D.I.K. until the Lifeguards hit the ring to send the heels packing. Quite a situation we have in the tag team division here in Pro Wrestling RIOT.

SINGLES MATCH
Kenny King w/Chasyn Rance vs. Jaison Moore: Chasyn Rance was injured and on crutches at ringside, but that didn’t stop him from constantly interfering in this very competitive match until Delta Iotta Kappa & Fetish showed up to put an end to Rance’s shenanigans. Jaison Moore scored the upset victory over King after a little distraction from Joshua Masters. The Heartbreak Express attacked Delta Iotta Kappa at ringside. Chasyn Rance took a few shots at Fetish. A long brawl broke out throughout the arena with loud music playing over the speakers. They are hyping the Heartbreak Express & Club 305 vs. Delto Iotta Kappa & Lifeguards match at the March event.

UNSACTIONED TAG TEAM STREET FIGHT
Bruce Santee & Sideshow vs. 911 Inc. (Kory Chavis & Frankie Ciatso w/Ron Niemi): After some pre-match chicanery orchestrated by the “Hardcore Giant” Ron Niemi, this brutal Street Fight began to unfold before the rowdy PWR fans. Ciatso and Sideshow ended up outside, as seen via the picture-in-picture effect. Of course Ron Niemi was getting involved whenever he could to give his team any unfair advantage. Sideshow was messed up by a Spike Pile-driver at the hands of 911 Inc. Shortly after this the bell rang and the referee awarded the match to 911 Inc. due to Sideshow being knocked senseless and unable to continue. A post-match verbal exchange made it clear that the war between these wrestlers is far from over. Bruce Santee challenged 911 Inc. to a Tag Team “I Quit” match at the March event.

FIP WORLD HEAVYWEIGHT TITLE ANYTHING GOES MATCH
Erick Stevens vs. Ray Beez: I love the Ray Beez “homeless” gimmick. Before the match, Beez used some screwed up logic to claim ownership of the FIP World championship. Erick Stevens wouldn’t hand over his FIP championship, but did agree to defend it against Beez in an Anything Goes match. Midway through the match, they introduced a ladder into the match and quickly destroyed it beyond repair. Beez ended up with a trash can over the upper part of his body and was clotheslined down by Stevens. One Doctor-bomb later and Stevens walked out of “Uncontrollable” with his FIP championship in tact.