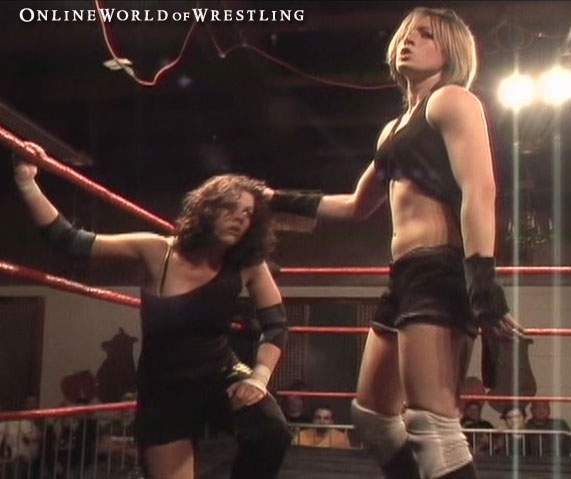 SHIMMER rolled out the red carpet for Volume 3 of it’s series of innovative DVDs featuring some of the World’s top female wrestlers. This edition is highlighted the debut of several very welcome additions to the roster, including Ireland’s spitfire Rebecca Knox [Photo: Rebecca Knox vs Allison Danger].

Rain kicked off the show with a victory over Boston’s Nikki Roxx – I like both of these girls and they worked very well together to have a great opening match. Far be it for me to over-analyze appearances but I just wanted to say I was very happy to see that Roxx went back to being a brunette!

Match number two was a triple threat match between the bouncy Cindy Rogers, the legally blonde Amber O’Neal (who lost her tag team partner to the WWE), and Canada’s Tiana Ringer. All three of these girls have very interesting personalities and very differing wrestling styles. This made for an intriguing dynamic, which was concluded with a win for Cindy Rogers.
Next up 19-year veteran Malia Hosaka debuted with SHIMMER to take on another debuting wrestler named “Country Girl” Lorelei Lee. I have been waiting patiently to see Lorelei in action as I have had the pleasure of exchanging emails with her in the past and was very interested in checking her out. She did very well for herself; So well, in fact, that she scored an upset victory over Hosaka, much to the excitement of the audience. Hosaka’s partner in crime, Lexie Fyfe, wasn’t quite as excited as she hit the ring and helped Hosaka beat-down the over-achieving rookie until Cindy Rogers returned to the to make the save. Look for a tag team match on Volume 4.

Lexie Fyfe stuck around for her scheduled match with MsChif and managed to secure a victory, only after repeated distractions from Cheerleader Melissa at ringside. They set up a “Falls Count Anywhere” match for Volume 4 so in the words of the legendary Billy Red Lions, “Don’tcha dare miss it!” Cheerleader Melissa had to get past Canada’s Shantelle Taylor first, and they had a surprisingly long match together. Melissa really made Shantelle look great in this match; so great, in fact, that Shantelle was signed by the WWE shortly after this taping. After some grueling back-and-forth action, Melissa finished off her petite opponent with a devastating Air Raid Crash.

The semi-main-event was the highlight of my night. Allison Danger quickly challenged the debuting Rebecca Knox to a match, wanting to test her skills against the international superstar from Ireland. After ten minutes of incredibly hypnotizing chain wrestling, Knox’s worst case scenario happened as she landed awkwardly on one leg and twisted her knee, ankle and probably a few toes and screamed in agony. The show came to a sudden halt so that she could receive much needed medical attention. Knox was helped up to her feet while her concerned opponent, Allison Danger, held the ropes open for her out of respect when out of the blue {WHACK!} Knox had a miraculous recovery and kicked Danger square in the face! Folks, let me tell you I had a major mark out moment when I saw this and I watched with great pleasure as my new hero Rebecca Knox switch to heel mode and methodically dismantled Allison Danger until scoring the pinfall. This was the best match I’ve seen in SHIMMER so far and I have to give both ladies a lot of credit. Rebecca Knox truly is the spice of life and I hope she keeps coming back to kick some American butt!

The main event was a rematch of sorts, featuring the final two participants of the 4-WAY from Vol. 2, Daizee Haze vs Sara Del Rey. I am continually amazed by the skinny blonde hippy every time she steps into a ring as she doesn’t look like much but she packs a punch that is on par with any other woman wrestler in the World. Sara Del Rey, of course, continues to be SHIMMER’s unofficial MVP and she proved it by scoring the victory over Daizee Haze to remain undefeated. I do have one small complaint (and everybody knows I’m not one for complaints!). Why is Daizee Haze in all the main events? Vol 1 = vs Lacey; Vol 2 = in the 4-WAY; Vol 3 = vs Del Ray. I mean, like I said, she is amazing, but you have a dozen or so other amazing wrestlers on the roster. You have probably the best women’s wrestler in the World in Cheerleader Melissa and she has yet to taste the main event slot. Like I said, just a small complaint, I still loved the DVD and can’t wait to check out future SHIMMER home releases.