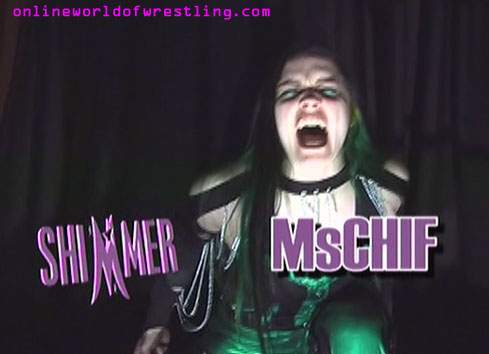 Allison Danger (wearing a spicy Betty Page t-Shirt) reminisced about SHIMMER Volume 3 when they welcomed Ireland’s Rebecca Knox into their locker room with open arms. Danger remembered how Knox faked a knee injury en route to scoring a victory over her. Danger counted down all of Knox’s cheatings over the past several DVD’s including stealing two falls over Daizee Haze in a Best 2/3 Falls match on Volume 5. Danger then talked about facing Knox in the first ever Pure Wrestling match in SHIMMER TONIGHT! Danger concluded by crediting ROH Pure Champion Nigel McGuinness for showing her how to win at the pure wrestling game.
In a rematch from Volume 5, OVW sweetie Serena Deeb sought revenge over Amber O’Neal in singles competition. O’Neal has traded in her frilly pink designer outfit for some shiny black leather gear. Serena used a little lucky leverage to reverse a small package to her advantage and scored the 1-2-3 to get her victory back over the bitchy blonde diva ( 5 / 10 ).

The next match was a battle between the veteran team of Lexie Fyfe, Malia Hosaka and Amazing Kong taking on the considerably less experienced trio of Ariel The Portuguese Princess, Josie (debut) and Cindy Rogers. The young girls were putting on a brave face but it was apparent that they knew they were going to take a beating at the hands of Amazing Kong. Hosaka and Fyfe were content to stand on the ring apron and let Kong do all the work, but Kong looked like she wasn’t exactly on the same page as her veteran tag team partners. Malia Hosaka has been wrestling for nineteen years but is every bit as beautiful as she has ever been, not to mention her great technical skills and superior grasp of wrestling psychology that makes her the ultimate total package. Once Hosaka and Fyfe started tagging in it became somewhat competitive, but whenever Amazing Kong was in the ring she dominated all three of her fresh-faced prey. The punishment these poor girls (especially Josie) took was far too much and they eventually succombed to their bigger, stronger, more experienced foes ( 6.5 / 10 ). Josie was properly initiated into SHIMMER with a severe beating and taking a big splash from Amazing Kong off of the second rope.

“Country Girl” Lorelei Lee, who has one of the best names in the wrestling business, faced off against Nikki Roxx in a one-on-one match between two crowd-favorites. The Country Girl is still very green but there is something I like about her. At this point in her career, every match Lorelei Lee competes in is a major learning experience and Boston native Nikki Roxx is the perfect opponent to learn from. Roxx, the proprietor of wrestling’s hottest rear end, sure does know what she’s doing in the squared circle. I was absolutely shocked when I heard commentators Dave Prazak and Allison Danger plug the website of Lorelei Lee during the match – it’s just not very common to do that! Feel free to mention the OnlineWorldofWrestling.com website some time! Nikki Roxx won the contest and is hopefully moving up the SHIMMER ladder now ( 6 / 10 ).

OVW-bound British sensation Nikita was up against “Miss Main Event” herself, Daizee Haze. Whatta ya know, two babyfaces clashing once again. After a little early foreplay, Nikita suddenly got aggressive and took the heel role in the match. Despite being dominated for most of the contest, the little stick of dynamite Daizee Haze got the win ( 7 / 10 ).

Before the highly anticipated pure wrestling match could get underway, they showed clips from Volume 3 when Rebecca Knox faked a knee injury to outsmart Allison Danger. That was truly one of the greatest moments in SHIMMER history in my opinion. Absolutely brilliant! They also showed clips of Rebecca Knox cheating her way to victory over Daizee Haze on Volume 5. At the tender age of only 19, Rebecca Knox has perfected her own unique wild and crazy heel character – and I think she’s awesome! Pure wrestling rules state that a wrestler can use only three rope breaks – after that the ropes are in play. It makes for some interesting scenarios and I’m glad SHIMMER has adopted this style of match. Dave Prazak was joined by former WCW scream queen Daffney on commentary – gosh I miss Daffney! Rebecca Knox kept punching Allison Danger with closed fists behind the referees back until Danger became infuriated and fired back with a closed fist in full sight of the referee who penalized Danger by taking away her first rope break. Allison went nuts after this and put Rebecca in a cross arm-breaker causing Knox to use one of her rope breaks to even it up at one a piece. Eventually both women used up all their rope breaks and then things got really interesting because they could legally use the ropes to their advantage. The match ended with Knox rolling through a cross-body from Danger to score the pinfall ( 8 / 10 ). The ropes didn’t even factor into the finish which is kinda dumb to me but it just means that Knox defeated Dangers fair-and-square. Knox is truly the Iron Woman of SHIMMER, her matches are usually the longest on the card.

That last match felt like the main event, but there were two more star-studded matches left on the card. The semi main event was a tag team match featuring the ultra heel combination of Rain and Lacey, collectively known as the Minnesota Home Wrecking Crew. Their opponents happen to be engrossed in one of SHIMMER’s greatest rivalries going all the way back to Volume 1 – the Latina Sensation Mercedes Martinez and the American Angel Sara Del Rey. All I can say is it’s about time Rain and Lacey appeared as a team on a SHIMMER DVD! It once again begs the question; why doesn’t SHIMMER have any titles? Rain and Lacey would be excellent tag team champions. The undefeated (in SHIMMER) Sara Del Rey is my favorite wrestler and if you like her then you should check out her DVD too. Del Rey would make the perfect SHIMMER singles champion. The heartbreaking finish saw Sara Del Rey accidentally kick Mercedes Martinez, leading to the Minnesota Home Wrecking Crew picking up the lucky victory ( 7.5 / 10 ). Mercedes rightfully blamed Sara for the loss and this confrontation will no doubt lead towards a heated rematch between these two fierce fighters.

The feud between Cheerleader Melissa and MsChif provided SHIMMER fans with a memorable Falls Count Anywhere match on Volume 4 which spilled into the streets. It was time to take it one step further with the first ever Last Woman Standing match. If they’re not going to have titles in SHIMMER thank God for gimmick matches. They were extremely aggressive right out of the gate and it didn’t take long for the attempted 10-counts to begin. MsChif must have had her spine surgically removed at some point because she gets bent into the sickest positions. It was a brutal match that ended when MsChif nailed Melissa with a weak-looking Desecrator on a folding chair and put Melissa down for the ten count ( 8.5 / 10 ). Not as good as their Volume 4 match but still pretty damn intense. You won’t see this kind of women’s wrestling anywhere in the World – and most definitely not in the WWE.

The DVD ended with a quick promo by Nikki Roxx stating her intentions to go to the main event in SHIMMER – YES!

Last, but certainly not least, we were treated to a promo from the incomparable Rebecca Knox, whose verbal skills are unbelievably refined for such a young talent. With her intoxicating Irish accent and several dump-truck loads of energy and confidence, Knox could very well be one of the greatest promos of all-time. Yeah, that’s right…. I said it!

Bonus matches were taped at an AAW event the night before SHIMMER was taped. Bonus material includes the incredible French Canadian wrestler LuFisto taking on Josie from a match. If you’ve never seen LuFisto you owe it to yourself to check out her DVDs – you will be blown away by how awesome she is. She is on her way to SHIMMER too! The second bonus match features Cheerleader Melissa & Nattie Neidhart vs. Allison Danger & Sara Del Rey, collectively known as the Dangerous Angels. Super tag team action!

Final Thoughts: The lighting system was horrible, just like on Volume 5 (which makes sense since both Volumes were taped on the same night) so hopefully they will improve that on future SHIMMER DVD’s. Despite the lighting issues, the match quality of this release was at an all time high. The last three matches were over-the-top awesome and Daizee vs. Nikita was as solid as it gets for a mid-card bout. This volume contains the most footage of any other volume as well, with about three great hours of content.