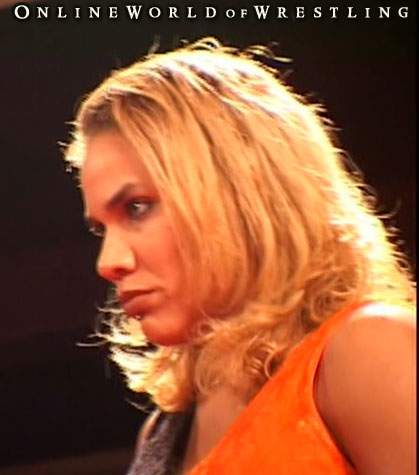 It’s hard to believe SHIMMER has released eight volumes of DVDs featuring top notch women’s wrestling; and as of this writing, there are at least four more releases taped and ready to be released to the public. SHIMMER has jumped all the hurtles and survived all the obstacles to become the most successful source for women’s wrestling in North America. Way to go, girls!

It was Student vs. Teacher as Lorelei Lee took on her mentor Lexie Fyfe in a match that stemmed from Lorelei’s upset victory over Fyfe’s tag team partner Malia Hosaka back on Volume 3. Lexie Fyfe showed that she was all business, taking the fight to her less experienced protege. Announcer Allison Danger pointed out that Lorelei Lee needed to start winning more matches or she’ll lose her spot on the roster. Fyfe indeed proved that experience is the ultimate advantage as she downed the Country Girl by pinfall ( 5 / 10 ).

The energetic Cindy Rogers skipped around the ring slapping hands with all the fans in the front row before her match with OVW Diva Serena Deeb. They call Rogers the “Definition of Technician,” so I guess she’s trying to be SHIMMER’s answer to Chris Benoit. It appears Cindy has been reading the heel handbook of professional wrestling as she seems to be on the brink of a heel turn. Rogers made Deeb tap out and then delivered a few post match stomps to her opponent after the match ( 6 / 10 ).

Allison Danger carries the torch for SHIMMER everywhere she goes, and usually gets a crack and all the high profile international talent that comes into the company. The Dangerous One faced off with French-Canadian wrestler LuFisto, known for her hardcore style but also proficient in technical pro-wrestling. This first time ever match-up should have been way higher on the card – like third to last. LuFisto made Danger tap out with a choke submission to win a match that was much too short ( 7.5 / 10 ). LuFisto helped Danger up after the match and showed her respect.

Amber O’Neal (the only surviving member of Team Blondage) defeated Josie with the STO in a match that should have been lower on the card and much shorter ( 3 / 10 ). Amber O’Neal is a great talent but her gimmick is a two-person act. She needs a tag team partner to play off of, but it seems like all of the other blondes get scooped up by WWE. The STO is a great finishing move for O’Neal.

The devilish Malia Hosaka brought her 20-years of experience to the ring for a match with the rising star known as Nikki Roxx. I’m a huge fan of both of these women and everybody knows my opinion of Nikki Roxx’s butt – best in the business! The action went back-and-forth the good amount of time before Nikki Roxx scored an unexpected pinfall to win the match and continue her ascent up the ladder of success ( 8 / 10 ). What a really great match by two under-rated SHIMMER stars!

Hart Family representative Nattie Neidhart made her second and final appearance with SHIMMER facing “The Portuguese Princess” Ariel. Nattie was so proud as she strutted out to the ring looked right into the camera and yelled “Yeah, baby!!” just like her daddy, Jim “The Anvil” Neidhart used to do. They are emphasizing the “Portuguese Princess” part of Ariel’s name now so that she won’t get confused with WWE’s version of Ariel, who, as you know, was recently released from WWE. I thought they could have found a better opponent for Nattie as they knew she wasn’t going to be around for very long. Ariel always surprises me because I constantly underestimate her abilities. Nattie got the victory when she used to the famous Sharpshooter to make Ariel tap out ( 7 / 10 ).

Woodstock flower-child Daizee Haze was showing no effects from taking the devastating Kudo Driver from Cheerleader Melissa on Volume 7 as she went up against Canadian bad-girl Tiana Ringer. Putting aside my Canadian bias for a moment, I am still extremely impressed with Tiana Ringer since I started watching her in a SHIMMER ring. Tiana has improved a lot, looks to be in phenomenal shape, and has mastered her heel characteristics. Tiana looked like she might have The Haze’s number but the girl with the most SHIMMER main events used the Heart-punch/Yakuza-kick combo to finish off Ringer in a solid 15-minute match ( 7.5 / 10 ).

In the Semi-Main Event, the girls you hated from high school (Rain and Lacey) faced off with the girls you were afraid of in high school (MsChif and Cheerleader Melissa). Rain and Lacey, collectively known as the Minnesota Home-Wrecking Crew, have dominated the SHIMMER tag team division by only challenging “teams” that have heat with each other; for example Del Rey/Martinez or Melissa/MsChif. The Home-Wreckers won the match and celebrated their dominance as Melissa and MsChif solidified their alliance with a handshake after the match ( 8.5 / 10 ).

Sara Del Rey vs. Mercedes Martinez was the match that put SHIMMER on the map on Volume 1, where they wrestled to an epic time limit draw. The girls once again locked up for a pressure-filled main event on Volume 5, for a contest which was won by “The American Angel” Sara Del Rey. Since then, “The Latina Sensation” Mercedes Martinez has been patiently waiting for her chance to face Sara Del Rey once more. Volume 8 was the time, and the place, as Martinez aggressively took the fight to her nemesis. Del Ray put her undefeated streak on the line against her all-time toughest opponent in a hard-hitting 25-minute clash which ended when Martinez nailed a series of Saito Suplexes to hand Del Rey her first loss in SHIMMER competition ( 9.5 / 10 ). Absolutely incredible match – they kept up an insane pace the entire time with only a few short rest holds. We should probably expect a rubber match soon.

Final Thoughts: With nine matches and one bonus match squeezed into three hours of action, SHIMMER has never been more worth the price of purchase. In fact, this amount of entertainment is worth a lot more than what is on the price tag. Support women’s professional wrestling and experience SHIMMER Women Athletes for yourself. By the way, they have begun dropping hints that a SHIMMER championship might be created in the near future.