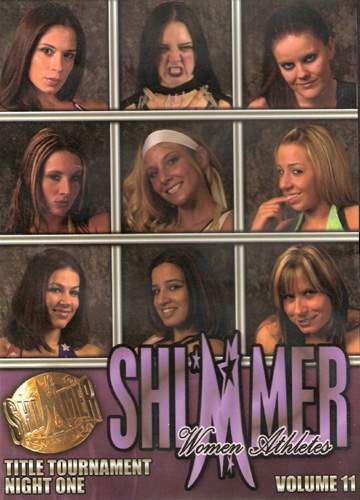 For a year and a half, SHIMMER fans across the globe have wondered why there were no championships to be won, when a prestigious title would finally be created, and who would have the honor of becoming the first champion. All of those questions, and more, would finally be answered in SHIMMER volume’s 11 and 12. The roster was whipped into shape during its previous ten DVD volumes, each release a little bit better than the last. Each wrestler, plucked from different regions of the World, raised the level of their game, adapting to a new style of women’s professional wrestling – one that would turn heads, raise eyebrows, and catch the attention of the entire wrestling community. Noticed not just for their strength and beauty, but for the skills they possessed, and their proud declaration that they are SHIMMER….. Women Athletes!

Round 1 – Malia Hosaka vs. Allison Danger: “What are you lookin’ at?” was the battle cry of veteran wrestler Malia Hosaka as she burst through the curtain for her match with SHIMMER ambassador, Allison Danger, who was wearing that cool but creepy Japanese face mask during her entrance. As the bell rang I couldn’t help but think about how far the company has come since Shantelle Taylor and Tiana Ringer opened up Volume 1. Malia Hosaka worked over Allison Danger’s knee, souring Danger’s championship dreams if she was even fortunate enough to advance to the next round. Hosaka shocked everybody (including me) by putting Danger’s shoulders down for the count via the figure-four-leg-lock to advance to the next round ( 6.0 / 10 ). Expect the unexpected. I guess this frees up Allison Danger to help Dave Prazak on commentary for the rest of the DVD.

Bubly Rebecca Bayless was introduced to the live crowd and she entered the ring in her summer dress and high heels to introduce the newest member of the SHIMMER roster, Alicia! Hackensack’s own Alicia came out heeling for all of the fans and said she should have been on SHIMMER volume’s one through ten. Alicia said she was ready to claim her spot as the number one wrestler in SHIMMER.

Round 1 – Portia Perez vs. Daizee Haze: Don’t let her cute looks fool you; Portia Perez is one badass Mother Canucker! She has pretty good heel skills for an up-start performer. Unfortunately for young Portia, her opponent was “Miss Main Event” Daizee Haze, and I don’t think they would book two upset victories in a row. Allison Danger quipped “Portia has finally found someone her own size to pick on,” haha – how long were you saving that one Allison? The Haze put Portia down with the Heart Punch/Mind Trip combination to secure her spot in the next round ( 6.5 / 10 ).

Round 1 – Cindy Rogers vs. Sara Del Rey: Cindy Rogers was wearing her black leather jacket, which makes her look like she should be hanging out with Deuce & Domino in the WWE. Sara Del Rey came out wearing her new “Death Rey” t-Shirt and was given a small battery operated toy gun by a fan – and then she shot him! She went around the ring shooting random fans; seriously this belongs on WrestleCrap.com – haha! If you had never seen Cindy Rogers before, you might think that she was going to be eaten alive by Del Rey, but the “Definition of Technician” really put up a good fight. Del Rey eliminated Rogers from the tournament, but was favoring her shoulder as she exited the ring ( 7 / 10 ).

Round 1 – Ariel vs. Alicia [sub for Serena Deeb]: They announced that Serena Deeb failed to make it to the building due to an unfortunate car accident, and awarded the match to “The Portuguese Princess” Ariel by forfeit. Alicia came out and goaded Ariel into letting her replace Deeb in the tournament. Alicia took advantage of the opportunity to nail Ariel with an A-bomb and pin her while holding the tights ( 6.5 / 10 ). All I can say is good luck with Sara Del Rey in the second round!

Round 1 – Lexie Fyfe vs. MsChif w/Daffney: I love the Scream Queen combination of MsChif and Daffney. The green and black attack! Lexie played the dominant heel, but MsChif hit the Desecrator to pick up the win and move on to the next round ( 7 / 10 ).

Round 1 – Cheerleader Melissa vs. Sara Stock: This would be the debut of “Dark Angel” Sarah Stock in SHIMMER, and what better way to debut than to be the “Wild Card” entry in the tournament. Sarah Stock is originally from Canada, but spends the majority of her time wrestling in Mexico, where she has really built up her name. The Dark Angel is as hot as the sun, she is in amazing shape, and has phenomenal wrestling skills as well. What a great acquisition by SHIMMER. I couldn’t help but admire her skimpy outfit. Sarah Stock scored what announcer Dave Prazak called an “upset victory” over Cheerleader Melissa in her debut match to advance to the second round ( 8 / 10 ). The Dark Angel has shot up the SHIMMER rankings and proven herself to be part of the true ELITE.

Round 1 – Lacey vs. “The Jezebel” Eden Black: The irritating voice of one half of the Minnesota Home-wrecking Crew, Lacey, emerged from behind the curtain prematurely proclaiming herself the first SHIMMER champion. Eden Black is a feisty British spitfire who proves that good things truly can come in small packages. The Jezebel is one of the best female wrestlers in the UK and as impressed enough people to be a regular at SHIMMER DVD tapings in the United States. Lacey completely underestimated her smaller less-experienced opponent, which is a mistake that many people make when stepping into the ring with Jezebel – which often gives her a distinct advantag over her naive opponents. Lacey still scored the victory to advance, but she had to work a little harder than she probably expected ( 7.5 / 10 ).

Round 1 – Nikki Roxx vs. Rain: The absolute best ass in the wrestling business, Nikki Roxx, took on the other half of the Minnesota Home-wrecking Crew, Rain (who some people might now know as Payton Banks in TNA). Rain was faced with the prospect of facing her tag team partner, Lacey, in the second round if she won, but that didn’t matter because Nikki Roxx finished Rain off with a Barbie-crusher to claim the final spot in the second round ( 6.5 / 10 ).

Rebecca Bayless did an in-ring interview with Serena Deeb, who managed to make it to the building after “totaling” her car in an accident on the way to the show. Deeb looks entirely different in street clothes. Deeb confirmed that she was okay, but she couldn’t say the same for her car. Deeb also confirmed that tomorrow night (Volume 12) she would be in action. Deeb said she would have her eye on whoever wins the SHIMMER tournament gave a warning that she would be coming for them. Great interview!

Round 2 – Daizee Haze vs. Malia Hosaka: After picking up the shocker upset victory of the first round, veteran grappler Malia Hosaka was faced with the task of wrestling Woodstock flower-child Daizee Haze. The Haze “appeared” to be a little bit intimidated by her more experienced opponent before the match. Malia was on offense for the majority of the match, but lightning wouldn’t strike twice – the Haze won to advance to the Semi-Finals ( 6 / 10 ). 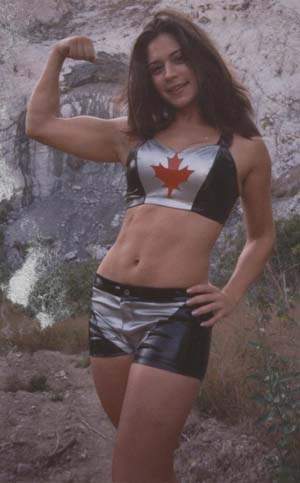 Round 2 – Sara Del Rey vs. Alicia: Sara Del Rey had the goofy toy gun hidden in her trunks, pulled it out and shot Alicia before the match – and Alicia took the bump as if she was shot with an invisible jelly bullet. Fans were probably expecting Del Rey to destroyed Alicia in this one. I personally would have booked it that way, but everyone earns their paycheck in SHIMMER and there are no squash matches. It took a little bit longer, but the American Angel did finish Alicia off with the Royal Butterfly and got the biggest pop of the night from the fans, who were more than happy to see Del Rey shut Alicia up once and for all ( 5.5 / 10 ).

Round 2 – Sarah Stock vs. MsChif w/Daffney: In the first round Sarah Stock wore a very skimpy outfit that left very little to the imagination (not complaining), but she showed up for this match in a full body jump suit (like Elvis) with only part of her back exposed. It doesn’t matter what the Dark Angel wears to the ring, she is one of the best female wrestlers in the World and I don’t know why it took her so long to get here! Despite my blabbering on about it, nobody seemed to mind that the Dark Angel was significantly less naked for her second round match against one half of the Scream Queens, MsChif, accompanied by the original Screen Queen, Daffney! This was a highly competitive match, but Sarah Stock showed off her obviously superior skills and proved once again why she belongs in SHIMMER with a victory over MsChif using a well-executed Tiger-driver ( 8.5 / 10 ). Sarah Stock is SO GOOD that she is almost making her opponents look BAD. Move over Sara Del Rey, I think I may have found a new favorite female professional wrestler! Let’s say it’s a TIE.

Round 2 – Lacey vs. Nikki Roxx: Nobody ever said Nikki Roxx wasn’t a crowd pleaser. In fact she slapped hands with every fan, and even made one guy get out of his seat to give her a high five. Then she aborted her ring entrance to jump down and give one neglected fan a hug (lucky bastard!). Lacey avoided having to wrestle her tag team partner in the second round, but I for one might actually enjoy seeing that some day. By the way, for those of you who don’t know, Nikki Roxx works for TNA as Roxxi Leveaux, but she is obviously a completely different character in SHIMMER. Dave Prazak made the very peculiar statement that Lacey had “a lot of experience under her belt.” What? Nevermind. This was technically the main event of the night, so Lacey and Nikki got to wrestle the longest match on the card. Roxx went for the Barbie-crusher, but Lacey squirmed out of it and hit an Implant DDT to advance to the final four ( 8 / 10 ).

Final Thoughts: Nobody would have blamed SHIMMER if they just made volume 11 feature only first round matches and give the girls a little more time. But SHIMMER strives to give the fans their money’s worth with every DVD, so we got all of the first and second round matches in a three hour package. Volume 12 will feature the Semi-finals and Finals of the tournament plus some other unique match-ups featuring SHIMMER Women Athletes. I can’t tell you how fun it is to sit down and watch a DVD that features all my favorite wrestlers from bell-to-bell. There is literally nobody in SHIMMER that I dislike; the closest would be Alicia, and I don’t dislike her, I just don’t particularly like her. Any fan would fall head over heels in love with the entire SHIMMER roster – just like I did!