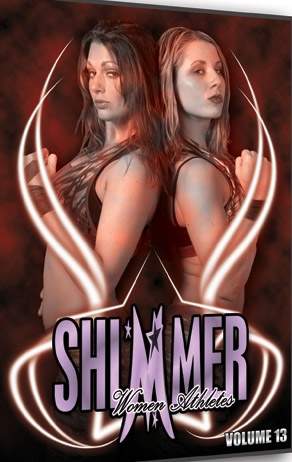 Dave Prazak’s ultra-fantastic SHIMMER Women Athlete’s was riding a huge wave of momentum, on the heels of the crowning of the first SHIMMER champion in Sara Del Rey. The SHIMMER crew presented the thirteenth installment of their celebrated DVD series, featuring North America’s hottest and most talented female professional wrestlers.

Serena Deeb vs. Alicia: The story here stems from when Alicia replaced Serena in the SHIMMER title tournament after Serena was in a car accident on the way to the show. Alicia only made it to the second round but I guess Serena felt she had to get some kind of revenge on Alicia anyway. Maybe Serena thought Alicia was the one who ran her off the road? Serena gets more beautiful every time I see her, and I really hope they begin to build her towards a future title match. If they are, this would be the first step, as she scored the victory and began her ascent up the ladder or success.

Malia Hosaka vs. Josie: Malia Hosaka should be in WWE or TNA, as a teacher and an on-screen performer. Not only does she have the skills and experience, but she is as hot as the sun (figuratively speaking). Josie has done a phenomenal job redefining herself after considerable weight loss. She is now smaller, faster, and full of that all-important piss and vinegar. Josie was taking on somebody who, no doubt, is one of her idols, and must have soaked in benefit of Malia’s experience even in a losing effort. Malia Hosaka gets a well-deserved singles victory.

Lexie Fyfe vs. Eden Black: The British firefly Eden Black, who Allison Danger insists on calling “Indyrific,” went up against the women who would later play the part of Hillary Clinton on the April 21st (2008) edition of WWE RAW – Lexie Fyfe! You could say this was another old-school vs. new-school match, and the new-school rep “Jezebel, oops I mean Indyrific” Eden Black surprisingly made the experienced Lexie Fyfe tap out to the Garden of Eden submission finisher.

MsChif vs. Portia Perez: It sincerely pains me to see my fellow Canadian, Miss Perez, play the part of heel, because she is so young, so cute, and so Canadian! MsChif was accompanied by her Scream Queen partner, Daffney, and took advantage of the clearly frightened Canuck standing in the opposite corner. Portia’s colors are pink and black, but she spent the first part of the match trying to avoid a heart-attack! That’s right, I’m a poet. The noticeably superior MsChif finished young Portia off with a devastating move called “Obliteration.” And the move looked as scary as it sounds.

Inside the ring, the bubbly Becky Bayless interviewed the injured and limping Alexa Thatcher, who explained that she fractured her foot in a “pretty bad accident,” but plans to be back in action as soon as possible. Alicia interrupted with a condescending tone, saying she hoped Alexa would be back. While exiting the ring, Alicia assaulted a suspicious Alexa Thatcher, repeatedly stomping her braced foot. Bitch! Is it just me or has there been A LOT more in-ring “talking” segments since Alicia’s arrival? Is that a good thing or a bad thing?

Cheerleader Melissa vs. “Portuguese Princess” Ariel: Everybody’s favorite San Francisco treat, Cheerleader Melissa, was prepared to eat the perpetually cheerful Ariel for lunch. This match took place before Melissa debuted in TNA under the mysterious mask going by the name “Raesha Saed.” That last tidbit was for any of my readers who have been living under a rock. Melissa made Ariel look good for about ten minutes before putting her down with the Air Raid Crash finisher.

“Dark Angel” Sarah Stock vs. Daizee Haze: I always knew Sarah Stock was good, but when I finally got to see her in action with my very own eyes, when she debuted with SHIMMER, she instantly became my co-favorite female wrestler – along with Sara Del Rey. It doesn’t hurt that she’s Canadian, either. Sarah Stock’s skills are so superior to everyone else’s, it sometimes makes everyone else look bad by comparison. TNA would be very smart to scoop her up immediately. Her opponent, Daizee Haze, has taken her share of beatings throughout the previous twelve SHIMMER DVD’s – and picked up an inspiring number of wins too. There was a “Little Person” in the crowd, who I’m pretty sure was WWE’s Hornswoggle. Anyway he got up and danced with The Haze a little bit! The crowd wanted more dancing, and the Haze delivered with a weird freak dance which ONLY Daizee could pull off and still look good. The Woodstock flower-child put up a heck of a fight, but Sarah Stock’s flawless natural ability was too much, and Stock continued to plow through the SHIMMER roster.

Dog Collar Match – Allison Danger vs. Cindy Rogers: The bitter Danger/Rogers feud has culminated in a dangerous Dog Collar match. The crowd was about half stunned by the brutality involved in this match. Eventually Danger suffered a cut on her forehead and started to bleed. That’s right folks, blood in a women’s match! Both girls came within an eyelash of winning, only to be jerked back by the neck just when they were about to tap the fourth and final corner pad. There aren’t many possible finishes for a Dog Collar match, but they did the thing where Cindy Rogers carried Allison Danger on her back and touched each pad, only to have Danger tap the pad behind her. They swerved from the traditional finish, and had Danger inadvertently STO Rogers into the corner, giving the villainous “Definition of Technician” a big victory over her nemesis!

Sara Del Rey & Nikki Roxx vs. The Minnesota Home-wrecking Crew (Rain & Lacey): The man-hating Rain and Lacey wore matching outfits with custom made white tank-tops with their names printed artfully on the front. They both removed their tops, revealing their delicious rock-hard abs. I wrote that only because when they read it they will roll their gorgeous eyes at me. SHIMMER champion Sara Del Rey led her partner Nikki Roxx to the ring, fending off any evil-doers with her plastic “death rey” toy gun. This match was booked after the shenanigans that went down during the finals of the SHIMMER title tournament. It was Del Rey vs. Lacey, but when Rain started interfering on Lacey’s behalf, the powerful Nikki Roxx hit the scene and hastily took care of the illegal “Home-wrecker” interference. The Minnesota Home-wrecking Crew are extremely unified as a team, whereas Del Rey and Roxx may not be all that familiar with each other. Del Rey has to be aware that Roxx, like everyone on the SHIMMER roster, is gunning for the SHIMMER championship. I thought for sure that the Roxx and Del Rey combination would crumble at the first sign of trouble. I was wrong. They worked like a well-oiled machine, and finished off the home-wreckers with a Barbie-crusher and a Royal Butterfly.

Final Thoughts: For the first five matches of the card, it seemed like they were throwing the less experienced wrestlers to the wolves. But I guess that is all part of the learning process; at least one of them (Eden Black) scored an underdog victory. As usual, the second half was pure dynamite – featuring three brilliant matches. They are building up several wrestlers for shots at the SHIMMER championship, so there will be no shortage of challengers for the Death Rey. Serena, Melissa, Sarah Stock, and Roxx – to name a few.