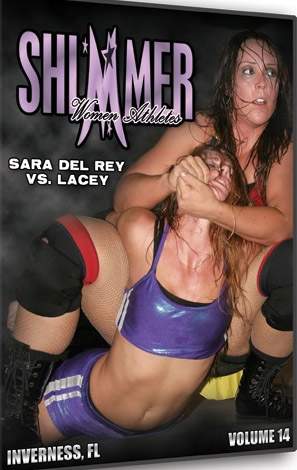 This “Hot Summer Night’s” event was presented in conjunction with the Full Impact Pro promotion, so it took place in the infamous “FIP Mobile Studio,” in Inverness, Florida, in front of SHIMMER’s biggest audience to date. The change of environment is a definite plus.

MATCH
Amber O’Neal vs. Ariel: The legally blonde Amber O’Neal was looking hotter than ever for this match. She *might* have had some work done, but if not then whatever she did to herself is working! Commentators Dave Prazak and Allison Danger ripped on O’Neal  for worrying too much about her looks and not scoring enough victories in SHIMMER competition. I thought that was a set-up for some kind of storyline, but O’Neal fell to the trademark Dariel finisher to put another check mark under Amber’s “L” column.

TWO OUT OF THREE FALLS GRUDGE MATCH
Allison Danger vs. Cindy Rogers: The “Definition of Technician” has already beaten Allison Danger at her own game, a Dog Collar match, so now it was time to do battle in Cindy’s preferred style – a two out of three falls technical wrestling match. Danger also excel’s in this type of match, but Rogers’ entire gimmick revolves being the best technical wrestler. Shockingly, Rogers rolled up Danger in the first ten seconds and pulled on the tights to pick up the first fall of the match, putting a frustrated Danger at a severe disadvantage. The next ten minutes provided fans with some of the best technical wrestling ever seen in a SHIMMER ring. Allison Danger tied the score after connecting with a Shimmering Warlock and scoring the pin on Cindy Rogers. This was quite an intense match for only being the second bout of the card. Danger’s intentions for revenge  were squashed when Rogers locked in the TCB (Taking Care of Business) submission in the middle of the ring. Danger passed out while in the hold, and the referee lifted her limp arm and the fans watched as the arm dropped to the mat three times – thus giving the “Definition of Technician” the impressive victory.

BACKSTAGE INTERVIEW
Becky Bayless & Malia Hosaka: Malia Hosaka talked about wrestling one of her first matches ever in this building against Wendi Richter. Hosaka said that she IS the experience in SHIMMER and Serena Deeb better be ready because she (Hosaka) is the professor tonight!

MATCH
Lexie Fyfe vs. Daffney: This would mark the official in-ring debut of Daffney Unger in a SHIMMER ring. She was subbing for Portia Perez, who was taken out of action with a broken hand. I love Daffney, and so do the rest of the SHIMMER fans. Before the match, Daffney called Lexie a “dinosaur,” and did her best impression of a T-Rex walking around the ring. Daffney has no choice but to use comedy and psychology against her more experienced opponent. Then, out of the blue, Daffney fell to the mat and grabbed her apparently injured knee. Fyfe went for a pin, but aborted it at the last second, just so she could callously apply a leg-lock on Daffney’s injured knee and make her tap out. After the match, Malia Hosaka joined Lexie in a post-match beat-down until MsChif and Serena Deeb made the save! MsChif and Fyfe fought up the isle to the backstage area, while a referee assisted Daffney away from the ring.

MATCH
Malia Hosaka vs. Serena Deeb: For a while there, it looked like the “Experience” was going to run away with another victory, but the lovely Serena, despite a shoulder “injury,” scored the upset win instead.

BACKSTAGE INTERVIEW
Becky Bayless & Nikki Roxx: Nikki Roxx talked about facing Amazing Kong in a rematch from epic battle on Volume 5 – a match that catapulted Roxx into SHIMMER stardom (even though she lost). Roxx vowed to be the first person to defeat Amazing Kong in SHIMMER.

MATCH
Cheerleader Melissa vs. Rain: Melissa made her adrenalin-pumping entrance, waving her trademark black pom-poms, sporting a half-smile (or was it a smirk?) – which is a rare occasion. This is my kind of match, a couple of tough brunettes pounding and stretching each other. The smile on Melissa’s face seems to grow whenever she is dishing out extreme punishment on her opponent. After a while, Rain slowed Melissa’s offense by working over her back. Around the ten minute mark, Melissa mounted her come-back and rearranged Rain’s facial features with a devastating curb-stomp! A few minutes later, Rain turned the tables with a brutal Lung-blower from the second rope – doing further damage to Melissa’s aching back. Melissa gutted it out and nailed Rain with an Air Raid Crash for the win!

MATCH
Daizee Haze vs. MsChif: There was some pre-match tomfoolery, when the Haze insisted that the referee inspect MsChif for weapons, but MsChif kept screaming and scaring the crap out of the referee. Daizee and MsChif go back a LONG way, basically growing up in the business together, starting out in Missouri, working their way through IWA Mid-South, and helping to build SHIMMER from the ground up. These two are wrestling each other for the first time in SHIMMER, and ended up having an amazingly grueling match. They pulled out all the stops, including using all of each other’s finishing moves. The Haze used MsChif’s Code-green (aka Code-red) to mark the beginning of the end for MsChif. A few moments later MsChif’s shoulders were pinned to the mat, giving Daizee the well-deserved win.

REMATCH FROM VOLUME 5
Amazing Kong vs. Nikki Roxx: Back on SHIMMER Volume 5, Amazing Kong made her debut in SHIMMER against Nikki Roxx. At the time, Roxx was a mere mid-card performer, so everybody (including myself) thought Kong would eat Roxx alive. Kong dished out an unbelievable amount of punishment, but the resilient Nikki Roxx held on and kept kicking out, and opened everyone’s eyes to the talent deep inside of Roxx. Kong ended up winning that contest, but it was Roxx who emerged the clear star of the match. Now it was time for Nikki Roxx to take what she has learned since then and challenge the Amazing Kong once again. Kong looked hungry and ready to demolish the athlete with the best ass in the wrestling business. The referee got sandwiched in the corner, so Kong took advantage of the freedom and dragged Roxx out into the seating area. Kong recklessly threw Roxx into a row of chairs, sending the fans scattering for safety, but one young fan didn’t scatter fast enough and was taken down by the out-of-control Roxx. Hopefully he wasn’t hurt – but I bet he got some merchandise from the promoters. They eventually found the ring again, and Roxx continued to fight back, and amazingly picked up Kong for a massive body slam! Kong immediately recovered and dazed Roxx with the dreaded backfist (after Roxx ducked the first several swings), and then finished her off with a huge splash off the second rope!

SHIMMER TITLE MATCH
Sara Del Rey (Champion) vs. Lacey: Lacey was the runner-up in the tournament on SHIMMER Volume 12, which saw Sara Del Rey crowned the first ever SHIMMER champion. By default, that is usually enough to earn you the first shot at the champion – and that brings us to SHIMMER Volume 14! Lacey tried to convince the referee to let her try on the SHIMMER belt before the match, but he wisely refused and ignored her request. Lacey is so devilishly cute. This was another grueling painful match, going back and forth. Everyone expected Rain to interfere at some point, but they implied that the entire SHIMMER locker room was keeping an eye on her backstage. Del Rey proved why that SHIMMER title belongs around her waist, but pushing forward and eventually submitting Lacey to survive her first of hopefully many SHIMMER challengers. It’s not like there is a shortage of people lined up for their opportunity; Cheerleader Melissa, Amazing Kong, Sarah Stock, Nikki Roxx, Mercedes Martinez, Daizee Haze, MsChif, Allison Danger and countless others.