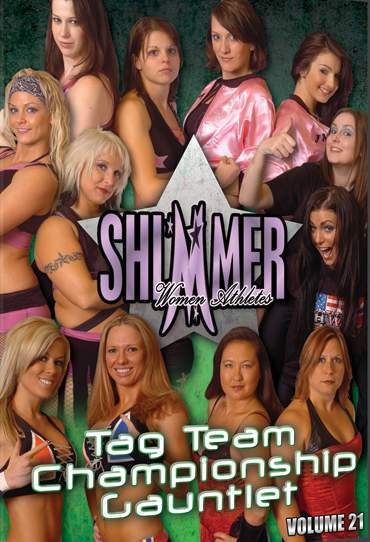 IN THE RING: The fit and sexy Serena Deeb came out with an aggressive tone talking about wrestling for SHIMMER for two years! Serena hyped the crowning of the first ever SHIMMER Tag Team champions TONIGHT! Serena said a car accident last summer knocked her out of the SHIMMER title tournament, which was won by Sara Del Rey. Serena talked about her loss to Del Rey on SHIMMER Volume 20, and demanded a rematch TONIGHT! Del Rey quickly hit the ring and expressed that she was sick of wrestling bottom of the barrel girls! Del Rey shoved the microphone into Deeb’s chest and began to walk off. Deeb proclaimed this bottom of the barrel girl was going to kick her ass! Del Rey jumped back in and took Deeb down with a boot to the chest! The match began..

SINGLES MATCH   [ BUY ONLINE ]
Sara Del Rey vs. Serena Deeb: I dare you to find a more heated opening match on any wrestling card in the world. Deeb and Del Rey aggressively grappled for pride, with Deeb seeking valuable retribution on top of that. Del Rey put away the Deeb with her trademark Royal Butterfly to solidify her dominance, and also put an exclamation point on her claim to number one contendership! Something tells me Deeb will be back to fight Del Rey at least once more..

SINGLES MATCH  [ BUY ONLINE ]
Miss Natural vs. Lorelei Lee: If you’ve never seen Miss Natural before, you might have expected a spoiled blonde temptress to pop out from behind the curtain. However, you would be wrong, as Miss Natural is a regular looking brunette with a true wrestler’s physic. Lorelei Lee, despite her terrible win-loss record, has been around the SHIMMER ranks for quite some time. She is the model of health and fitness, but her star hasn’t shone that bright during her time in the professional wrestling business. Miss Natural turned her debut with SHIMMER into an impressive outing, scoring a great victory over Lorelei!

SINGLES MATCH  [ BUY ONLINE ]
Daffney vs. Cat Power: Daffney came out and got a good laugh by asking the fans to “SHIMMER down now.” Daffney talked about her last match with Cat Power, where Daffney submitted to the Figure-4 Leglock. Daffney also made a not-so-subtle reference to wrestling as Shark Girl (RIP Kayfabe). Cat Power is – MEOW – the hottest wrestler I have ever seen, and I’m not just saying that because she’s from my home province of Nova Scotia. A few seconds into the match, Daffney threw a ball of yarn across the ring and Cat chased after it. Okay that was ridiculous, but frickin’ hilarious. The finish saw Daffney distract Cat with the ball of yarn again, and knocked her out with the Daff-knees finisher! Dave Prazak said that this was Daffney’s first victory in SHIMMER as a wrestler! Editor’s Note: Well if you don’t count her three victories as Shark Girl.

SINGLES MATCH  [ BUY ONLINE ]
Nikki Roxx vs. Danyah: Nikki and Danyah are probably the two fittest female wrestlers in the world. I would compare Danyah now to Nikki Roxx five years ago. You can quote me in 2014 when Danyah is a big star like Roxx was in 2009. Seriously, quote me! There was no way a rookie was going to use Roxx as a stepping stone here, so it came as no surprise when Roxx nailed Danyah with the Barbie-crusher for the 1-2-3! However, Roxx made Danyah look like a million bucks – and even in defeat, Danyah is better off..

SINGLES MATCH  [ BUY ONLINE ]
Wesna Busic vs. Amber O’Neal: Amber O’Neal is taking the Blondage gimmick to the next level, even though she never wins and her gimmick has been dead since Krissy Vaine left her. I’m begging you Krissy, please come back to SHIMMER and help Amber get her career back! Amber’s opponent was one of my favorite female wrestlers, known as the Croatian Panther, the hard-hitting Wesna Busic! The crowd intimidated O’Neal by chanting “Wesna’s gonna kill you!” Wesna paid her dues on volumes 17 and 18 with tough losses to Mercedes Martinez and Awesome Kong, but finally got on the right track with a victory over blonde Amber after a CB4-driver!

SHIMMER TAG TEAM CHAMPIONSHIP GAUNTLET  [ BUY ONLINE ]
The Pink Ladies (Madison Eagles & Jessie McKay) vs. The Canadian Ninjas (Portia Perez & Nicole Matthews) vs. The Suicide Blondes (LuFisto & Jennifer Blake) vs. The International Home-wrecking Crew (Rain & Jetta) vs. Ashley Lane & Neveah vs. The Experience (Lexie Fyfe & Malia Hosaka): It was time to make history, with the crowning of the first ever SHIMMER Tag Team champions. I hate the concept of a Gauntlet Match, and I do not understand why you would use it to crown your first champions. It’s not exactly fair to any team and hardly equates to an even playing field. So we started off with Australia’s Pink Ladies going against the Canadian Ninjas for an international showdown. The Ninjas came out with Big Gulp cups, but what exactly are they implying? The Pink Ladies are… interesting! Why would you fly them in from Australia to book them in an insignificant loss? The Ninjas downed the Australian beauties, and were next faced with another Canadian team called the Suicide Blondes! So far everyone has worn pink and black ring gear. Everyone knows about LuFisto’s hardcore nature, but you might look at Jennifer Blake and misjudge her. She looks like a prom queen, but she is really quite the aggressive stick of dynamite in the ring! The Blondes successfully defeated the Ninjas and moved on to the next round – where they would face the International Home-wrecking Crew! The Home-wreckers used a pair of brass knux to knock out Blake and advance one step closer to Tag Team gold! Ashley Lane & Neveah hit the ring like a ball of fire, but were quickly out-battled by Rain & Jetta. Somehow, the Ohio Girls squeeked past the Home-wreckers to advance to the finals to face The Experience. Everything up until now doesn’t even count. The Experience has only lost one match in SHIMMER competition. On Volume 17, Lane & Neveah debuted as a team in SHIMMER against the Experience in a losing effort. So it was clear who the underdogs were for this match. The underdogs beat the odds and became the only team to win twice in the gauntlet to become the first ever SHIMMER Tag Team champions!

FOUR CORNER SURVIVAL  [ BUY ONLINE ]
Amazing Kong vs. Cheerleader Melissa vs. Mercedes Martinez vs. Portuguese Princess Ariel: They have been pushing Ariel into the big time, and she is really an amazing talent, but I don’t think she will ever share the same star power as Amazing Kong, Cheerleader Melissa, or Mercedes Martinez. I was afraid that they might put Ariel over these three main eventers. Mid-way through the match, they did an insane tower of doom spot out of the corner with Kong on the bottom and Ariel on top! My worst fears were realized, as Ariel scored the biggest victory of her career in the upset of the century! Good for her.

SHIMMER TITLE MATCH  [ BUY ONLINE ]
MsChif (c) vs. Daizee Haze: These two long-time rivals go all the way back to their rookie years, wrestling in Missouri for a promotion called Gateway Championship Wrestling. Missouri can definitely be proud of these two professional wrestlers! Dave Prazak mentioned the expected return of Sarah Stock, who is looking for a future shot at the SHIMMER title. They started out slow and methodical, rolling around on the mat exchanging pure wrestling holds. Whenever a match starts slow, you know it will probably go quite long. Around the 15:00 mark, the pace began to pick up, and within five minutes MsChif had used the Desecrator to pin the Haze and retain the SHIMMER championship! MsChif showed sportsmanship after the match towards the Haze, who reciprocated by showing respect back to the champ!