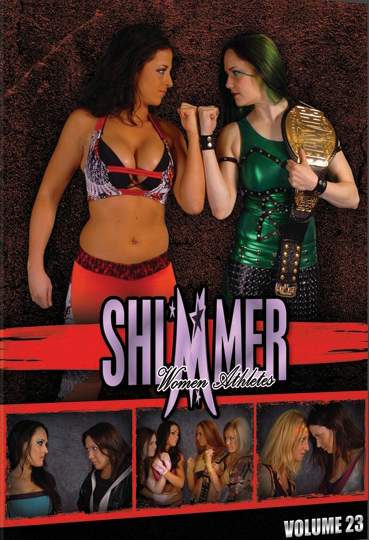 PARKING LOT: SHIMMER has a brand new on-the-spot correspondent, and her name is Amber Gertner. I will give her a chance to prove herself, but she isn’t your typical female in the pro-wrestling business. Gertner got her first scoop as she was on the spot when Annie Social arrived at the building. Annie announced that she was one of two people to receive a managerial license and was there to guide one wrestler to the SHIMMER championship.

NOTE: Dave Prazak was joined by Portia Perez on commentary for Volume 23. Portia replaced her mortal enemy, Allison Danger, who has done commentary on all the previous volumes of SHIMMER Women Athlete DVD’s.

SINGLES MATCH [ WATCH ONLINE ]
Nikki Roxx vs. Cat Power: Cat Power made her way to the ring looking so good in her sultry sex kitten outfit. What I wouldn’t give for the opportunity to scratch behind her ears and hear her purr for me. The Cat was put to the test against one of the best female wrestlers in the world, the happy-go-lucky Nikki Roxx. The fans threw balls of yarn in the ring just to torment the heel Cat Power. Roxx allowed Power to hit some of her moves, but eventually put her down with the Barbie-crusher.

SINGLES MATCH [ WATCH ONLINE ]
Amber O’Neal vs. Tenille: Amber O’Neal looks hotter every time I see her, and she is now billed from “she just flew in from heaven.” Tenille comes from Australia, and is a graduate of the Storm Wrestling Academy (Lance Storm). I just have to say that Tenille is cute as a button, sweet as a bucket of sugar, and hot as a curling iron – all at the same time! I didn’t expect her to be as good as she turned out to be. Being in the ring with veteran Amber O’Neal will give the young spitfire some valuable in-ring experience. Tenille is paying her dues, but I can see her being elevated to serious competition some day down the road. Amber used a screwy variation of a back-slide combined with a bridge to gain a rare victory in SHIMMER competition. Tenille got a warm reception from the fans as she got to her feet and made her exit. I hate to see her leave, but I love to watch her go.

SINGLES MATCH [ WATCH ONLINE ]
Daffney vs. Melanie Cruise: This would be my first opportunity to experience Melanie Cruise in action. When she made her entrance to the ring, I immediately noticed how uncomfortable she looked, except it was a confident kind of uncomfortable. She has a great look, slightly Gothic, and would never be caught smiling in public. I bet she has a nice smile, though. Daffney came out with a new gimmick, which happens to be a green ice cream cone. Commentator Portia Perez called it a foreign object, which should have been taken away (this from the girl who brings chocolate chip cookies to the ring). Annie Social made her first appearance of the night to scout the talent in the ring. Either girl could work very well with Annie Social’s philosophy on pro-wrestling. Daffney is already “over,” and Cruise could use the help, so I would suspect Social would choose to offer guidance to Cruise. Daffney won the match and quickly exited, allowing Annie to jump in the ring and console the rookie.

SINGLES MATCH [ WATCH ONLINE ]
Sara Del Rey vs. Madison Eagles: Sara Del Rey’s new gimmick is that she has gone crazy after losing her title, and she has modified her look to represent that attitude. One look at the new Del Rey, and you actually believe that she has blurred the lines of Kayfabe and gone crazy in real life. If there was ever a candidate for someone to get a breast enhancement surgery, it would be Madison Eagles. The Australian native is a very tall, remarkably attractive, and physically fit specimen – but lacks in the booby department. You can’t take anything away from Madison’s obvious talent, however, as she held her own against the unorthodox Del Rey. Del Rey struggled to put the finishing touches on the Aussie, but sealed her fate with a forceful Royal Butterfly.

SINGLES MATCH [ WATCH ONLINE ]
LuFisto vs. Kellie Skater: This would also be my first opportunity to experience Australian bad girl Kellie Skater in action. I’m only guessing, but I think that name is a play on the world’s greatest surfer, Kelly Slater (who is also from Australia). My first impression of Skater was that she had very skinny arms and didn’t look like much, but as soon as she opened her mouth my opinion changed. She cut a pretty hot promo, establishing herself a bitter heel – ready to prove herself here at SHIMMER. Her challenge was answered by the outrageously popular super hardcore anime, LuFisto. Skater was initially not effected by LuFisto, but had her mind changed by the end of the night when LuFisto ate her alive and finished her with a Burning Hammer!

SINGLES MATCH [ WATCH ONLINE ]
Daizee Haze vs. Nicole Matthews: Canadian Ninja Nicole Matthews is improving with every match she gets under her belt in SHIMMER, but she still leaves an impression of trying too hard. She has been booked against most of the main event quality stars, so somebody must have high hopes for her. At least one Nicole Matthews supporter was Portia Perez on commentary. I understand they are trying to elevate Nicole, but this match went on far too long. Business picked up when Daizee climbed to the top, but Matthews pushed the referee into the ropes, causing the Haze to slip. Then Matthews got up and hit the Haze with a huge Superplex off the middle rope! The Haze recovered and set up for the Heart-punch, but Matthews avoided it and hit a Northern Lights Suplex! Matthews followed up with a picture-perfect missile drop-kick! The Haze miraculously kicked out, and made another recovery. Haze hit the Heartpunch/Mindtrip combination, but could not get the three count. The girls found themselves rolling around the ring in a small package, desperately trying to find a pinfall, but time ended up running out. The fans wanted five more minutes, and Daizee wanted five more minutes, but Matthews decided that she proved that she could hang with a main eventer. Matthews left the ring, happy with her performance.

SINGLES MATCH [ WATCH ONLINE ]
Amazing Kong vs. Mercedes Martinez: Amazing Kong came out and got an amazing babyface reaction from the crowd; and as luck would have it, so did Mercedes Martinez. Martinez is so generous with her hugs for the front row ticket-holders. This match stems from a four-way on Volume 21, where both ladies clashed and came out on the losing end. Late in the match, Martinez amazingly connected with a Fishermens-buster on the enormous Kong! Kong miraculously kicked out, and nailed Martinez with an Amazing-bomb! Martinez grabbed the ropes to stop the count. Martinez ducked a backfist and hit an impactful Saito-suplex on Kong! Kong no-sold it and got right back up and hit Martinez with another Amazing-bomb for the 1-2-3 to win the match!

IN THE RING – Amber Gertner & Allison Danger + Portia Perez: Allison Danger talked about her recently born baby girl, and then cut a promo on Portia Perez – hyping their upcoming street fight. Portia Perez came out nibbling on her yummy chocolate chip cookie, and remarked that nobody cares about Danger’s stupid little baby. Portia said her only regret was that she didn’t break Danger’s neck when she had the chance. Danger called Perez a “twat waffle,” and Perez spit her cookie in Danger’s face! A fight immediately broke out, and they had to be separated by a bunch of jobbers and mid-card players.

SHIMMER TAG TEAM TITLE 2/3 FALLS MATCH [ WATCH ONLINE ]
Ashley Lane & Neveah (c) vs. The International Home-wrecking Crew (Rain & Jetta): For those of you who don’t know, Ashley Lane is known as “Madison Rayne” in TNA’s Beautiful People faction. The International Home-wreckers came out wearing masks, to protect themselves from the evil Swine flu. Lane & Neveah are petite, blonde, and adored by the male audience. A few minutes into the match, the Home-wreckers scored the first fall when SHIMMER legend Lacey showed up and interfered on behalf of Rain & Jetta. Everyone was confused by Lacey’s presence until she produced a managerial license from her back pocket! A few minutes later, Ashley Lane fought through the chaos and scored a roll-up on Rain to win the second fall. The match then went into sudden death, with the SHIMMER tag team championships on the line! The finish saw Rain distract the referee while Jetta knocked out Neveah with a chain-wrapped fist! The referee counted the 1-2-3 and awarded the SHIMMER tag team titles to the International Home-wrecking Crew! The referee somehow clued in that something wasn’t proper, and confronted the trio of Home-wreckers. Lacey accidentally dropped the chain and the referee found it, so he restarted the match. The underdog champions knocked Lacey out of the ring and jumped on Rain & Jetta. Moments later they scored the pin and retained their SHIMMER tag team championships!

THE RIVALRY COMES TO SHIMMER [ WATCH ONLINE ]
Cheerleader Melissa vs. Wesna Busic: This is the rivalry that helped put ChickFight on the map as far as the UK circuit is concerned. Melissa and Wesna competed in the greatest matches in ChickFight history, and their feud spanned several European federations. It has now made its way to the United States, and will reignite inside the world famous SHIMMER ring. I still can’t get over Melissa’s six-pack abs. She used to be kinda soft in the tummy, but really tightened it up in 2009. The viciousness escalated, as both athletes brutalized each others bodies. Eventually, Annie Social made her second appearance to scout the talent in the ring. Melissa and Wesna attempted to rearrage each others faces with forearms, punches, slaps, and full on kicks to the facial area. Who said bruises can’t be sexy? Melissa failed on two attempts to hit the Air Raid Crash, but did manage to connect with a Samoan Drop. Melissa went for a missile dropkick, but Wesna moved and swatted it away! Wesna hit the Ki-crusher, but Melissa kicked out after a two-and-a-half count. Wesna went for the CB4-driver, but Melissa avoided it. Wesna took Melissa down with a big boot to the face, but could only get a two-count. Melissa flatted Wesna’s face with a curb-stomp, but the pin was unsuccessful due to Wesna getting her leg on the bottom rope. Melissa noticed Annie Social and confronted her at ringside. Melissa threw one of her pom-poms in Annie’s face, and slid back in the ring. By then, Wesna had recovered, and the fighters went back and forth briefly until Wesna planted Melissa with a CB4-driver to finally score the pin and gain victory! Annie Social got in the ring and raised the arm of Wesna to celebrate their new alliance.

SHIMMER CHAMPIONSHIP MATCH [ WATCH ONLINE ]
MsChif vs. Serena Deeb: I don’t know what it is, but Serena Deeb gets better looking every time I see her. It’s no surprise that the WWE took notice and signed her to a developmental contract. Her rise up the ranks of SHIMMER got an exclamation point when she scored an amazing victory over Sara Del Rey to cap off a outstanding three match series. This was your typical MsChif title defense, excellent action from bell-to-bell, with MsChif utilizing the Desecrator to retain her SHIMMER championship. After the match, Sara Del Rey confronted MsChif and made it clear that she wanted her title back. Amazing Kong also showed up joined Del Rey in beating down MsChif until Cheerleader Melissa ran down with a steel chair to run off the heels!