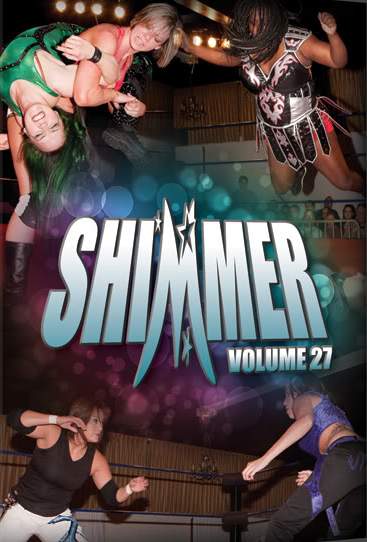 SINGLES MATCH
Malia Hosaka vs. Tenille: Malia Hosaka came out, strangely enough, with a cardboard cutout of her tag team partner, Lexie Fyfe, to place in her corner for moral support (?). Tenille is super hot to look at, and thankfully takes her craft seriously enough to get properly trained. She’s not going to be one of those cheap girls who slide by on her looks. Malia was out there to help teach Tenille a thing or two as she develops into a better wrestler. Tenille did a little on-the-job training, but eventually had her shoulders pinned by the legendary Hosaka.

IN THE RING
Allison Danger + Nicole Matthews + Kellie Skater: First they showed a video message from Portia Perez revealing that she had a doctor’s note claiming she had to stay home due to the swine flu. Back in the real world, Allison Danger entered the SHIMMER ring and I am happy to say she has quickly gotten herself back into tip top shape after having a baby early in the year. Danger questioned Portia’s excuses until Nicole Matthews came out and said “how dare you question my partner’s integrity!” Matthews continued to rant as Danger took off her jacket preparing to fight. Suddenly, Kellie Skater hit the ring and attacked Danger from behind!

SINGLES MATCH
Allison Danger vs. “The Rate Tank” Kellie Skater: My impression of Kellie Skater is that she is kind of a vicious dorky heel. Not sure if that was what she was going for, but luckily she has some pretty solid in-ring skills and was able to hang with the more experienced Danger. Danger hung tough and defeated the Aussie with the Old School Expulsion to maintain some momentum as she heads towards an epic clash with mortal enemy Portia Perez.

IN THE RING
Daizee Haze: Daizee Haze came out to address the fans and explain that her nagging back injury was keeping her from competing in a SHIMMER ring. The Haze said she was dedicated to SHIMMER and feels obligated to do something. The male referee stepped forward and presented Daizee with an official referee shirt! Daizee grabbed it and celebrated the honor of being a referee in the company she loves!

TAG TEAM MATCH
The International Home Wrecking Crew (Rain & Jetta w/Lacey) vs. Daffney & Rachel Summerlyn: Lacey & Rain are great heels but Jetta is one of the greatest heels I’ve ever seen. Daffney came out with her tag team partner, Rachel Summerlyn, a Texas-based brawler known for getting a little hardcore. She now wants to leave the world of hardcore and enter the more technical realm of SHIMMER. Summerlyn actually looks better compared to the video and photos I’ve seen of her in the past. She and Daffney have actually feuded in Texas, but they are claiming that Daffney is taking the Texas blonde under her wing as her protege in SHIMMER. Lacey earned her money and cut a promo before the match introducing her girlfriends. Jetta snatched the mic and proclaimed Lacey to be the world’s greatest manager! Daffney is billed from Bad Street, Atlanta, GA and I love that about her. Daffney just wasn’t acting right when she was on the ring apron. She seemed to be out of position whenever Summerlyn needed a tag. Eventually Daffney left her partner high and dry, dropping off the ring apron and walking backstage. Summerlyn tried as hard as she could but the three home-wreckers were too much for the rookie.

SINGLES MATCH
Portuguese Princess Ariel vs. Cat Power: Daizee Haze was assigned to be the referee for this match. The purrfect Cat Power was seeking revenge for her loss to Ariel all the way back on Volume #18 (Cat’s second match in SHIMMER). That was literally Cat’s first day on the job, and she was a green rookie looking up from the bottom of the ladder. Since then, Cat has had matches with stars like Daffney, Nikki Roxx, Serena Deeb, and others. Cat has soaked up all that experience and is poised to become a respectable heel in the promotion, having begun to use mind games to help gain a psychological advantage over her opponents. It doesn’t hurt that she is devilishly sexy! Cat Power showed how much she has improved by scoring a decided victory over Ariel and moved one more rung up the ladder of success.

TAG TEAM MATCH
Ashley Lane & Neveah vs.Wesna Busic & Melanie Cruise: Ashley Lane & Neveah lost the SHIMMER Tag Team championships to the Canadian Ninjas on Volume 26, so they were looking a little naked as they entered the ring. I don’t expect Lane & Neveah to be around much longer, as Lane is currently enjoying a good run in TNA as Madison Rayne. Wesna Busic has been one of my guilty pleasures for quite some time, and Melanie Cruise is one of a handful of new wrestlers quickly developing in SHIMMER. Cruise can learn a lot from being in the ring with Wesna. She seems to lack a certain charisma at this point. Ashley is a bubbly babyface here in SHIMMER, which is a vast contrast to her ultra sassy heel gimmick in TNA. I sit here trying to decide which portrayal I prefer, but I must say she is pretty good in both roles. Thankfully Wesna & Melanie picked up the win and began their climb up the ranks of the tag team division.

SINGLES MATCH [ WATCH ONLINE ]
Cheerleader Melissa vs. Nicole Matthews: Nicole Matthews came out carrying both of the SHIMMER Tag Team belts, in the absence of her partner Portia Perez. Cheerleader Melissa is looking extremely exotic these days, having seemingly blended aspects from all three of her former gimmicks; the Cheerleader, Raisha Saed, and Alissa Flash. The crowd was begging for Melissa to destroy Matthews. Melissa tried her best, but Matthews has been booked to look strong against opponents that should be able to squash her. Melissa was in trouble for a while, but fought back and hit a devastating Curb-stomp! Matthews miraculously kicked out and made a come-back, but Melissa finished her off with a Kudoh-driver! Melissa limped backstage selling a knee injury..

SINGLES MATCH
Sara Del Rey vs. “Everybody’s Favorite Girlfriend” Jessie McKay: Sara Del Rey has always been a menacing force within the squared circle, but she lacked the appearance of intimidation until she modified her look and became somewhat of a raging bull. It was supposedly the devastation of losing her SHIMMER championship which changed Del Rey’s attitude. The Australian sweetheart, Jessie McKay skipped out and circled the ring slapping hands with the fans. McKay looked like she was a little amused by Del Rey’s angry facade. McKay wrestling Del Rey is like diving into the kiddie pool – things are not going to go well for you. I understand that SHIMMER is trying to make their up-and-comers look good, but McKay has no business having a respectable match with Del Rey. It should have been a squash. Del Rey let McKay get some offense in and almost lost some teeth in the process, but eventually forced her to tap out by furiously tugging on her arm and shoulder!

SINGLES MATCH [ WATCH ONLINE ]
Amazing Kong vs. LuFisto: LuFisto was begging for a rematch with MsChif, after coming up short on Volume #26 in her bid for the SHIMMER championship. Amazing Kong also claimed she deserved a title shot, even though she was coming off of a stint as Sara Del Rey’s tag team partner. When you lose, you should go to the back of the line, but Daizee Haze made sure that a number one contenders match was signed between Kong and LuFisto. The Haze was out there to referee her second match of the night, and to make sure everything was on the level for this important match-up. Kong has been known to destroy referees in the past. The action spilled out of the ring and referee Haze counted them both out and declared there was no winner! So the mystery was who would get the future title match.

SINGLES MATCH [ WATCH ONLINE ]
Mercedes Martinez vs. Ayako Hamada: SHIMMER has decided to take advantage of Ayako Hamada being in America working for TNA, by bringing her in for some historic pro-wrestling matches. What you see in TNA will pale in comparison to how SHIMMER treats this International sensation. She was up against the consummate grappling specialist, Mercedes Martinez, whose purpose in SHIMMER has been to put on solid matches with anybody who dares step up to the plate. Allison Danger commented that she feels like a kid in a candy shop watching Hamada perform in a SHIMMER ring. The fans showed a lot of appreciation for the slow style, which was different from everything else on the show. They built up to a finish, and Danger was rendered speechless on commentary. Hamada pulled out a victory in her SHIMMER debut and definitely wowed the audience with her skill!

SHIMMER TITLE MATCH [ WATCH ONLINE ]
MsChif (c) vs. Nikki Roxx: Nikki Roxx has been one of my favorites for a very long time. I remember back in the day when I reviewed DVD’s and raved about her having the greatest ass in the wrestling business. I’m not 100% sure she still has that title but she’s a top contender. Roxx’s pride is in being one of the top professional female wrestlers in the world. That’s a more respectable claim to fame than the one I bestowed upon her many years ago. The wrestling Gods have blessed us with a Nikki Roxx, and now she was challenging MsChif for the SHIMMER championship. This would be MsChif’s twelfth title defense and she was not about take Roxx lightly. This was another slow methodical showdown. Roxx ended up recouping outside the ring and took a drink of a fan’s cup of [beer?] just for a laugh. The match was WAY TOO SHORT. Just as I was getting into it, MsChif hit her finisher and won. I was left wanting more. MsChif helped Roxx up and they embraced in the ring.