WSU Another Brick in the Wall 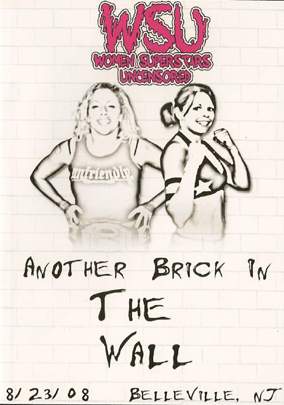 “Another Brick in the Wall”

SINGLES MATCH
Dawn Marie vs. Trixie Lynn: The feud between Dawn Marie and Becky Bayless was scheduled to continue on this night, but it quickly became apparant that Miss Bayless was not in the building. Dawn wanted to give the fans their money’s worth so she issued an open challenge, which was accepted by a very attractive, extremely fit, humble brunette named Trixie Lynn. She called Dawn Marie a super star and said she would be honored to face Dawn in her debut at WSU. Trixie is very attractive – did I mention that? Dawn immediately went heel, and brutalized the rookie with some stiff offense – but Trixie kept getting back up to her feet. Dawn took off her belt, and the referee confiscated it. Trixie mounted a come-back, when suddenly a backstage brawl between WSU champion Angel Orsini and Portia Perez spilled into the arena. The locker room emptied in an attempt to separate the two fighters. The “Commissioner” showed up and set up a WSU championship match later fought under Lumberjill Rules.. The match between Dawn Marie and Trixie Lynn was thrown out and forgotten. I hate when they do that!

SINGLES MATCH
Roxxie Cotton w/Rick Cataldo vs. Nicole Matthews: I might very well be in love with Roxxie Cotton, but if she ever wants to hang out with me she has to dump her partner and delete him from myspace, facebook, AND her cell phone. I know Nicole Matthews is from Canada (just like me), but she really needs to find a tanning bed! Matthews has grown as a wrestler since crossing the border and competing for promotions like SHIMMER and WSU. Roxxie faulted on a top rope move, and Nicole followed up with a Roll of the Dice for a nice victory over an established WSU star.

SINGLES MATCH
Melissa Coates vs. Autumn Breeze: Good good friend from Thunder Bay, Ontario – Melissa Coates – finally makes her debut with WSU. You might remember Melissa from Backlash 2005 when she was the victim of a Masterlock Challenge at the hands of “The Masterpiece” Chris Masters. Autumn Breeze is another cute rookie with blonde hair, pink highlights, and a silly gimmick name. Melissa is a power-house hottie, a real Glamazon (yeah, I said it!), and used her strength to gain an advantage over her opponent. Melissa looked like she buggered up her knee late in the match, bought fought through it and finished Breeze off with a Sit-down Gourdbuster (which she calls a “Face Lift”).

SINGLES MATCH
Rick Cataldo w/Roxxie Cotton vs. Princess Jana: Don’t ask me why this guy of all people was chosen to be the only male wrestler in WSU, because it’s a question I’ve been asking since I first saw him on the early WSU DVD’s. Despite his attempts to resist, Cataldo was dragged into the middle of a dance contest with Jana before the match. Roxxie was the over-dramatic hag at ringside, crying for Cataldo’s dominance. Jana had a rough time, but still managed to get a win out of it. After the match, Cataldo cut a promo about myspace and about how hot he was, before pouring a drink over his own head to prove it.

WSU CHAMPIONSHIP LUMBERJILL MATCH
Angel Orsini (c) vs. Portia Perez: The crowd was loving Portia Perez, even though she is usually a heel everywhere she goes. I have a soft spot for Portia for a couple of reasons, but my respect for her was solidified when I met her in person at a recent indy show in nearby town. She had her work cut out for her, fighting the larger more experienced Angel Orsini in such an intense type of match! The intensity climaxed with all of the Lumberjill’s getting in on the action in a chaotic cluster-fudge. When the dust cleared, Orsini scored the 1-2-3 over Perez to retain her WSU championship.