WSU Army of One (DVD Review) 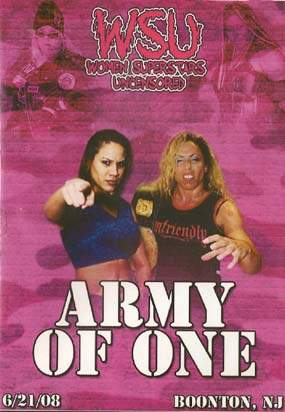 TAG TEAM MATCH
Alere Little Feather & Missy Sampson vs. Kacee Carlisle & Kylie Pierce: Alere Little Feather is one of my favorites, and I have great hopes for her. That’s why I’m pushing for TNA to give her a look. Kylie Pierce, that little she-devil, tried to use a foreign object but it backfired and Missy Sampson scored the pin to win! After the match, Kacee & Kylie handcuffed Missy to the ropes and double-teamed Little Feather. The heels left with their heat in tact.

SINGLES MATCH
“The Definition of Technician” Cindy Rogers vs. Lea Morrison: Cindy Rogers set out to stretch and pulverize the little Latina cutie in magnificent tight shorts known as Lea Morrison. I’m not 100% sure that Lea is a Latina but I am prepared to make an ass out of you and me. She might be Native American. Cindy gave Lea a free lesson in technical wrestling before making her submit for the victory.

TAG TEAM MATCH
The Beatdown Betties (Roxxie Cotton & Rick Cataldo) vs. The Soul Sisters (Jana & Latasha): Roxxie Cotton is my all-time favorite Valley Girl and now she has a cool t-shirt with that name printed on her sexy front. Her partner shouldn’t even be in the wrestling business. The Soul Sisters have reunited to begin their quest for the soon-to-be-sanctioned WSU Tag Team championship. Roxxie’s partner put about half of his body weight on the bottom rope and it effectively snapped from the pressure. Way to break the ring! The Beatdown Betties proved that they belonged in the hunt for the Tag Team titles with a victory over the Soul Sisters. After the match, Rick Cataldo made good on a pre-match stipulation and kissed WSU commentator Sean Hanson.

HEAVYWEIGHT GRUDGE MATCH
“Primetime” Amy Lee vs. Awesome Kong: Amy Lee’s promos will make you feel extremely embarrassed to be a wrestling fan, especially if someone whose respect you cherish is sitting in the next room within earshot of your TV. Save yourself the humiliation and keep your finger on the mute button. Nevertheless, it was enormously fascinating to watch Kong vs. Lee do battle in their highly anticipated rematch. It’s sort of like watching Gozilla vs. King Kong. Godzilla, I mean Amy Lee, took off her stinky boot and cold-cocked Kong in the head before making the cover. Unfortunately the referee had been knocked senseless a few moments before and when he woke up he called for a disqualification. Amy Lee rallied the fans and started a “Bullshit” chant before challenging Kong to a third match at the next show. Kong accepted, and Lee said there would be no rules, and it would be “last bitch standing.”

WSU CHAMPIONSHIP MATCH
Angel Orsini vs. Mercedes Martinez: These two tough cookies have been allies in the past, teaming up on more than one occasion to take on a common enemy. They put their friendship aside tonight to fight for the WSU championship. It started out as a genuine technical tour de force until the battle spilled outside the squared circle and traveled throughout the entire building. They tussled up and down, from side to side, and ended up on an elevated platform. Mercedes launched Angel off of one balcony down onto another just below! They continued to brawl until they were getting closer to the ring, when Orsini did the unthinkable and faked an injury to gain sympathy from her friend. Orsini waited for the right moment and rolled up Martinez on the floor for the 1-2-3 to retain her WSU title in an act of total desperation. Martinez was clearly offended by the betrayal and will most likely get a second opportunity at the WSU championship in the future. Hopefully she will be a little more aggressive and a little less trusting. All is fair in love and war.

BONUS MATCH (JAPW)
Nikki Roxx vs. Angel Orsini: This is the match where Angel Orsini captured the WSU championship. It’s weird to see Nikki Roxx wrestle as “Nikki Roxx” but still using her Roxxi Laveaux gimmick. It’s not like she can hide that sexy bald head! Everybody knows Roxx is tough as nails, so she was a great physical opponent for Angel Orsini. Nikki did the right thing and congratulated Angel after the match, but quickly turned and knocked her out with her newly won WSU championship belt! Amy Lee & Missy Sampson made the save, but Angel showed how much she cared by yelling “whatever!” at them!