INTRODUCTION: Women Superstars Uncensored released only one DVD this month featuring matches from their December 11th event in Dunnellen, New Jersey, including a huge match between Alicia and Nikki Roxx for a coveted open contract. 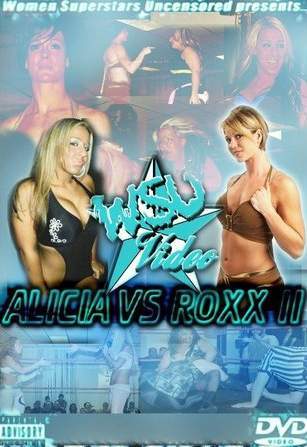 INTRODUCTION: WSU Spirit champion Brittney Savage was unable to defend her title due to injury, so they put her to work in the announce booth. I usually hate listening to Brittney on the mic, but she actually did a really great job on commentary throughout the event.

ALL GUTS NO GLORY TITLE MATCH
Angel Orsini defeated Rick Cataldo to retain the All Guts No Glory title: Angel came out and said that her scheduled opponent from Texas didn’t make it to the show, so she issued an open challenge. Before I could get excited, the challenged was answered by the perpetual annoyance known as Rick Cataldo, whose scheduled opponent (Melissa Coates) also failed to show up tonight. Melissa’s split from WSU was not pleasant, so Rick buried her on the microphone before the match. The pre-match talking lasted four times longer than the match, which ended up being a much welcomed squash.

ALL GUTS NO GLORY TITLE MATCH
Angel Orsini defeated Jamilia Craft to retain the All Guts No Glory title: Angel wasn’t satisfied with a 30 second match, so she issued another open challenge to anyone in the back. Not sure if Angel is supposed to be heel or babyface here. The challenge was answered by spirited newcomer Jamilia Craft. She is a bouncy rookie with a cute butterfly mask who manages to hide her physical shortcomings very well. Jamilia did a good job hanging with the veteran Angel for about five minutes before falling to the Kiss of Death. Angel seemed to be impressed by her opponent and high-fived the fans on her way out. Babyface.

WSU TAG TEAM TITLE MATCH
The Belle Saints (Marti Belle & Tina San Antonio) defeated Jennifer Cruz & Monique to retain the WSU Tag Team titles: Backstage before the match, Jamilia Craft was banging on Jennifer Cruz’s locker room door. Nobody came out. Craft said at the last show she was Cruz’s partner, and wanted to know why she wasn’t Cruz’s “mystery” partner tonight. Jamilia was upset about being treated this way and vowed to get to the bottom of it. She stormed off and Cruz poked her head out yelling for people to leave her alone. . . Skip forward to the Belle Saints entering the ring and looking fabulous as usual. The Saints spoke about winning the WSU tag team titles last month to gentle applause. Jennifer Cruz came out going heel and introduced her mystery partner, Monique – never heard of her (but she looks promising). The announcers said that Monique came from the Johnny Rodz school just like the Belle Saints. The Saints have refined their image as well as their skills in a very short time since joining WSU and they definitely deserve their push. Monique pulled out some kind of beauty spray and tried to use it on Tina, but it backfired and the Saints retained their titles. Cruz was pissed that she chose a terrible partner.

SUBMISSION MATCH
Jana defeated Cindy Rogers: Lucky for Cindy Rogers the submission match is her specialty, but that often leads to over-confidence. Cindy is still a member of the Cosmo Club, while Jana is in the process of reuniting with Soul Sister partner Latasha. They went back and forth, testing out various submission holds until Jana used Cindy’s over-confidence to pick up an impressive victory!

IN THE RING: Alicia came out and spoke about her current losing streak in WSU. Alicia then talked about her open contract match with Nikki Roxx tonight. Roxx came out and joined Alicia in the ring to hype the match which takes place in 30 minutes. Roxx said that Alicia’s losing streak would continue tonight! Roxx left the ring and walked off. Alicia pointed out that Roxx was also on a losing streak right now and she was going to win tonight for the fans.

SINGLES MATCH
Kristin Astara defeated Niya: Niya returned to WSU with some added charisma, and by charisma I’m talking about curly hair and eye glitter. She looks great. Her opponent was Kristin Astara, formerly known as Krissy Vaine from the WWE. She came out with some glowing balls and handed them to a young fan before prancing around the ring. She looks a little different. Kristin cut a babyface promo saying that Astara is born. She also gave Niya a gift before the match and they shook hands. Just hurry up and turn heel so you can reform Team Blondage with Amber O’Neal already! Astara won with her new move cleverly named “Astara is Born.”

OPEN CONTRACT MATCH
Alicia defeated Nikki Roxx: Nikki Roxx was wearing the same outfit she wore for her final appearance with TNA. Is it sad that I know that? Nikki is one of the greatest female wrestlers in the world, yet she still relentlessly cheated throughout the match. It ended up costing her thought, and Alicia managed to plant her with the A-bomb for the win. So the poster-child for WSU adds another accolade to her list. Congratulations.

FINAL VERDICT: Good DVD nothing special, not even the main event.

If you would like to purchase WSU DVD’s
you can do so by visiting www.wsuwrestling.com