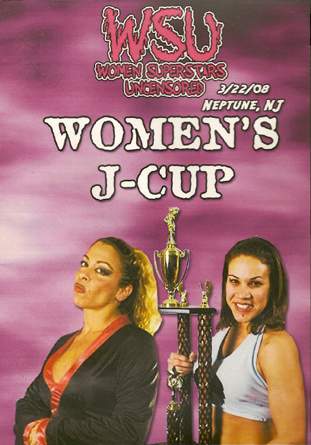 INTRODUCTION: It looks like WSU has taken it up a few notches in the production department with some pretty smooth disc menu effects. Unfortunately the venue did not offer the best visual for wide shots, but the ringside camera picked up the action with perfection. This was a joint effort between WSU and a New Jersey-based promotion known as NWS (National Wrestling Superstars). So eight (actually seven) women were selected to fight for J-Cup trophy in a one-night tournament – let the games begin!

J-CUP FIRST ROUND
Mercedes Martinez vs. Princess Jana: I’m confused as to when Soul Sister Jana became a “Princess,” but she was still the same babyface dancing queen she has always been. Mercedes Martinez was also fighting on the good side, so this was a rare all-babyface encounter. Jana held on for as long as she could but it was the more dominant and experienced Mercedes Martinez who advanced to the next round.

J-CUP FIRST ROUND
Angel Orsini vs. Roxxie Cotton: Angel Orsini is like a white version of Jazz. In fact, I’d like to see them team up one day. Roxxie has incessantly annoyed me for more than a year, however she has slowly but surely grown on me lately and I’m willing to admit I’m becoming a fan. It helps that she talks less and wrestles more. Her improved physical efforts have begun to over-shadow her unbearable verbal diariah mallrat gimmick. So like yeah Roxxie is all cool and junk with me. Roxxie sure took a beating and tapped out to a submission hold at the hands of the “not so Angelic” Angel Orsini.

J-CUP FIRST ROUND
Becky Bayless vs. Dawn Marie w/Tammy Sytch: Becky Bayless strutted to the ring shaking her sweet money-maker to the tune of “you want a piece of me,” by Britney Spears. The answer to that question is, YES, I want a piece of you Miss Bayless. Commissioner Tammy Sytch, at one point known as Sunny in the WWF, came out to act as ring announcer and introduce Becky’s opponent – former ECW/WWE Diva Dawn Marie! Dawn has added a little junk to her trunk since the last time we saw her, but she is still as beautiful and vivacious as ever. Dawn was never known as a wrestler, but she could definitely teach a thing or two to the new generation of “divas.” Sytch and Bytch (Dawn’s original ECW name) were adored by the fans, but seemed to be playing the heel roll when Bayless was also supposed to be heel. The match ended in a disqualification after Dawn took off her belt and aggressively choked Becky with it. Dawn refused to break the hold so the referee ended the match, but not even Sunny could convince the irate Dawn Marie from wrenching back on Becky’s neck. Dawn finally released the hold and screamed “I’m not finished with you,” just before leaving the scene of the crime. Becky Bayless instantly became a babyface and advanced to the next round, but will clearly not be 100% as she goes up against the Latina Sensation, Mercedes Martinez.

J-CUP SECOND ROUND
Angel Orsini vs. Rebecca Payne: I’m not sure where Rebecca Payne came from because they certainly did not include a first round match on this DVD. After a quick check on my WSU Results Page I discovered that Rebecca Payne was “randomly” chosen to receive an automatic bye to the semifinal round. They couldn’t find one more girl? Rick Cataldo wasn’t available? On second thought, I’m okay with the free ride to the second round. The red-headed Rebecca Payne felt the pain, as Angel Orsini steam-rolled through her into the finals of the J-Cup tournament.

J-CUP SECOND ROUND
Mercedes Martinez vs. Becky Bayless: Despite being Dawn-handled in the first round, “Loudmouth” Becky Bayless took the fight to Mercedes Martinez as soon as the bell rang. The beating actually served to piss Bayless off and make her even more aggressive. Wrestling in WSU has allowed Bayless to really develope her character and move away from the air-head persona that most other promotions exploit her for. Late in the match, Bayless pulled one of Eddie Guerrero’s tricks, and tossed Martinez a weapon and then pretended as though Martinez had whacked her with it! The referee fell for it hook, line, and sinker, and disqualified Martinez – thus allowing Bayless to seemingly advance to the finals. Commissioner Sunny came out on a mission to screw Bayless out of that accomplishment. Sunny restarted the match and appointed herself the referee. Less than a minute later, Mercedes Martinez had her arm raised and she stole Bayless’ spot in the finals. It’s odd that the babyface Martinez would accept such a screw-job finish.

J-CUP TOURNAMENT FINAL
Mercedes Martinez vs. Angel Orsini: We’re talking about two tough ladies facing off for the right to hoist the coveted Women’s J-Cup trophy over her head at the end of the night. The fight spilled out of the ring early, and Mercedes took the opportunity to launch Angel into the first few rows of chairs – inciting an ECW-chant (a nod to Prodigette, I guess). Mercedes Martinez pulled out the victory and proudly accepted the J-Cup trophy with a smile on her face and a tear forming in her eye.

EXTRAS (NON-TOURNAMENT MATCHES): If you like frosting on your cake, then you will enjoy the bonus matches included in the EXTRAS section of this DVD. Bison Bravado vs. Corey Havock, Mikey Pacifica vs. JD Smoothie in a strap match for the NWS Cruiserweight title, and Sal Sincere vs. The Zombie (yes, the infamous Zombie from ECW). This a perfect opportunity to check out a couple of wrestlers you may not have had the opportunity to see before. The matches are courtesy of the NWS (National Wrestling Superstars).