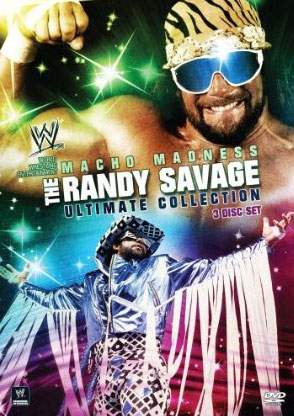 The latest home video provided by World Wrestling Entertainment features one of the most legendary performers to have disappeared from the WWE for the last 15 years & has never been positively reviewed until now. “Macho Madness: The Randy Savage Ultimate Collection” is three discs with nearly nine hours featuring this pro-wrestling icon in some of his most memorable matches, feuds, & storylines during his history in the WWE. Hosted by Matt Striker & WWE Diva Maria, each portion on all three discs of these DVD’s are guided in with prepared dialogue by our hosting duo with the material shown, as they guide you through “Macho Madness.”

The WWE once again is state-of-the-art in production when it comes to any current DVD release. This one features all footage from the mid 80’s & the 1990’s, so while the footage used is not in High-Definition as used today by the company, what they have & used has been well-preserved & showcased perfectly. The audio is clear & crisp, and with the exception of some overdubs on a few theme songs that the WWE does not own the rights to, the blend of audio & the great commentaries from such legendary announce teams mainly involving Gorilla Monsoon, Jesse “The Body” Ventura, Vince McMahon, & Bobby “The Brain” Heenan is a very enjoyable listen throughout the release.

Over a dozen extra interviews, a wedding (at SummerSlam ’91), Miss Elizabeth’s debut, & a “Macho King” coronation are the great special features provided in this DVD. While nice to see & great to watch all those vintage promos, I would have liked to see maybe just one other person besides your hosts (Matt Striker & Maria) throughout all nine hours say something about their time with “The Macho Man.” “The Nature Boy” Ric Flair, Ricky “The Dragon” Steamboat, “The Million Dollar Man” Ted DiBiase, “The American Dream” Dusty Rhodes, & even “The Heartbreak Kid” Shawn Michaels: just one addition from someone else saying anything about Randy Savage would have been a nice touch, but instead leaves me with a very incomplete & disappointing feeling.

Matt Striker & Maria are your only hosts, and what they say will guide you through a slew of matches. Is Maria there because she is the closest resemblance to Elizabeth? She reads off some facts in some parts, which looks very bad, because she clearly does not know the history given, and any viewer can tell she is reading a script. And without the cooperation of the Poffo’s, any older clips or footage from their own promotion in Kentucky when they were breaking in or photos from childhood is not pieced in. I wish there was some type of little story here, but the WWE did not design it that way this time. But anyways…onto the awesome WWE & WCW matches:

Madison Square Garden, “The Mecca,” is the first place Savage wrestled in the WWE

Savage’s Choice For A New Manager

First time these two greats lock up, having a classic battle in the process. The finish was exactly the same as a future match in The Boston Garden two more months down the line

Savage was a serious threat, and gives “The Hulk” a run for the money & a count-out loss

Brass knucks on the back suplex in the ring, and we have a new WWE Intercontinental Champion. Fans just saw this finish in this same building two months prior with Ricky “The Dragon” Steamboat

33 million viewers saw this live on NBC, told as the largest audience in WWE history

The fan that gets involved at the finish should be getting royalty checks, because he has appeared in this match numerous times before. A great Steel Cage Match.

“A Match Made In Heaven”
The Wedding Of “The Macho Man” Randy Savage & Miss Elizabeth
WWE SummerSlam — August 26, 1991

The Mega Powers Unite to face The Mega Bucks

“The Macho King” & “Sensational” Queen Sherri are now together. Buster Douglas gets a knock-out as well

“Intergender Mayhem” for the first time in WWE History

Career on the Line & a reunion with ‘Liz

Jake was a venomous heel, so evil that this footage is edited down from the original nowadays

Was ‘Liz with “Space Mountain” before “Macho Madness?” Their first big war together

The Coronation of “The Macho King”
WWE Superstars — September 30, 1989

A very rare match & a nice future look at a young opponent, who became a legend himself

One of Randy’s last matches in the WWE

The feud lives again in WCW

The Most Important Man in the World
WWE Prime-Time Wrestling – April 21, 1986

Covering almost fifteen years of classic footage, this DVD is sure to please any viewer old & new. Randy Savage is featured very well, and unlike another video release in the past about The Ultimate Warrior, this one speaks continuously high of a wrestling icon & makes any viewer get a feel that Randy Savage will be considered soon for a WWE Hall Of Fame future. This is a great display of a top performer, and you deserve to have him within your personal wrestling library. This release by World Wrestling Entertainment is very highly-recommended to everyone.

You will see a strong second with “The Macho Man,” that being “The First Lady Of Wrestling” Miss Elizabeth. After watching this home video release, you will realize she was a huge part in getting “The Macho Man” character over even more with the fans, and it is a shame that the hosts do not even bring to mention much of anything in regards to her involvement in almost all of the shown footage. Elizabeth was a wonderful person & is still truly missed, and the WWE should have at least made some comments in some sort of way to explain & pay tribute to a great lady who did a fine job in any company she worked for.