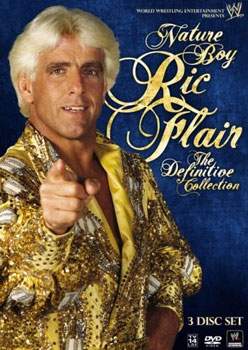 So I stayed up until about 3am watching the new Ric Flair DVD and let me tell you it was well worth it. It made you laugh; it made you cry and gave you a whole new meaning to what passion for pro wrestling is all about. I liked a lot of the stories he told about his times in WCW and WWE. I liked his thoughts on Sting, Hogan, Bischoff, Jim Herd and Ricky Steamboat. He talks candidly about them and doesn’t hold anything back.

After watching the DVD, there is a lot I found about WCW and the politics that went into it. One story I heard was when Flair came back to WCW after losing to Mr. Perfect on Raw, Ole Anderson told him that he was no value to him because he lost to Perfect on national TV. All I can say wow. My first impression was that there is no shame in losing to Curt Hennig on national TV. Then he spoke of how he made the introductions to Savage and Hogan that allowed Bischoff to sign them. Interesting stuff that make me love pro wrestling even more then I already did.

The matches on this DVD are great. My two favorites are Flair vs. Steamboat in 94, one of Steamboats last matches and Flair vs. Sting from the first Clash of the Champions. I still think Sting should come to WWE, and Ric even said his biggest mistake was not signing with WWE, because he was better then Warrior or Hogan ever thought about being. I also liked in one of the extras that his current wife talks about the relationship he has with Batista, Randy Orton, Triple H and Shawn Michaels during the Evolution run. Apparently Shawn rode with them and hung out with them. But she described it as they were a family. The one final thing that captured my attention is how Ric said the Wrestlemania 24 was the greatest weekend of his life. The Hall of Fame, his match with Shawn and the farewell on Raw were special to him. It’s a stylin’ and profilin’ DVD.

Anyone who is anyone in this business needs to buy this DVD. I don’t care if you’re fan, wrestler, wrestler, promoter or whatever you need to buy this DVD. Ric embodies passion in pro wrestling and what it takes to be a champion. To me he is the greatest pro wrestler of all time. Guys like Hogan, Hart, HBK, HHH and others are awesome and no one will ever replace them but Ric Flair stands out more then they do. Like I said before, if you love this wacky crazy world of pro wrestling you need to own this DVD, even it’s the only wrestling DVD you ever buy, this needs to be the one that you buy. Watch it, enjoy it and love it, because to Be the man, you have to beat the man….WHOOOO

Tons of stuff here with a great documentary, awesome matches, & fun promos. Some would be disappointed in wanting to see other things, but a 35-plus-year career & three-disc DVD title produced discs later from the WWE, and you could see where they have to go elsewhere in search not to review previous material.

Great video considering some of the matches are from footage over a quarter century in time where video technology was not elite. The presentation of this footage by WWE Films really enlightens the picture enough throughout to the point that your realization of the footage used has no negative effect to the viewer.

Great stuff with tons of classic unbelievable promos, and the extra-long farewell address on Monday Night RAW that was never seen fully. The panelists tell beautiful stories and make you relive all the moments.

The first disc is the story from Ric & his peers in regards to his adopted beginnings and breaking into the sport. The plane crash is reviewed again, because it is something that cannot be ignored. But from there it’s a throwback to the old day, something that Flair was pretty much the last man in the modern era to display to the viewer — where we see the constant grind of Ric being the traveling champion an his role in every territory. Not only do you learn a lot about Ric Flair, it is also a history of wrestling. Flair is the champion that bridged the territorial era and the national era. This DVD explains the massive changes that took place in the industry in a way that is much better than on previous WWE DVD’s. The stories are facinating with some review but mainly new discussed material coming from a relaxed Flair. Seeing Jim Cornette share many thoughts in this DVD was a surprise but even more shocking was not hearing a word from possibly Flair’s greatest opponent of all time who works for the company, Ricky “The Dragon” Steamboat. But hey, at least we did not get comments from “The Brooklyn Brawler,” Steve Lombardi this time around. Many funny moments & incredible stuff is said in these old school promos from the past, where Flair’s greatness is gloated upon by himself with not one scripted line from a writer involved.

If you got the DVD just to see Flair’s greatest matches, well out of the thousands out there you were limited to close to a dozen. The choices are fair, but not the very best and anything past Starrcade 1983 pretty much has made it’s way around if it was a major moment in Flairs career.

A great match of the set is a six-man tag team match from World Wide Wrestling. The match pits Flair & The Andersons against Magnum TA, “The American Dream” Dusty Rhodes, & Manny Fernandez. The intensity in the building creates one of the greatest atmospheres and you could see that every fan loved every minute of it. The workers in the ring had the crowd at their mercy. Seeing Flair govern Kerry Von Erich in his Dallas match or Sting in their classic Clash Of The Champions battle from 1988 makes you realize that Flair in his prime no matter what was ALWAYS on his A-game.

This DVD features a great story of the career of Ric Flair. The overlapping between the stories on this DVD & The Four Horsemen DVD are kept to a minimum. Compared to other wrestler documentaries, this is one of the better ones that the WWE has done. If you also are waiting to hear Flair talk about anything that displeased him, well, it will only be pre-WWE, as he has not a harsh word to say regarding anything with his current employer. Flair will get his shots in at the Jim Herd’s & Eric Bischoff’s, but any issues with Vince & the direction of his carer the last few years where you felt that there were problems will never be dwelled upon.

Buy this DVD. Old school fans that remember the prime of “The Nature Boy’s” career will be sure to enjoy this trip back in time. Younger fans that might have been wondering why Ric was shown such a great deal of respect, and brought many stars & fans to tears when he retired will understand why once they watch this DVD.

While you may have not been happy when Vince bought out the rights to WCW back in 2001, this DVD would not exist if Vince could never use any of the older Crockett/Turner footage, because it would never have been even close to the excellent production that the WWE & their goldmine of footage can create for the viewer.

The Definitive Collection Of Ric Flair is another excellent release, and definitely worth getting for any true wrestling fan from any era.