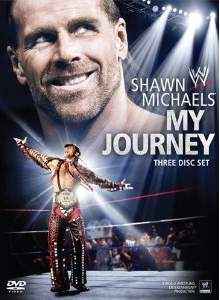 One of the strongest productions put out on DVD has got to be “Shawn Michaels: My Journey” from WWE Home Video. This three-disc set features over twenty classic wrestling matches that will blow away almost anything put out there when it comes to professional wrestling matches. The skills, the ability, charisma, & energy are all shown at maximum levels here in many moments during this fantastic journey through the times & trials of “the Heartbreak Kid.”

Hosted by Michael Cole, Shawn Michaels is also put into a “hot seat” style interview throughout the breaks of every match shown, and talks about his career as the matches go through from being a green kid in the locker rooms in Kansas City, Texas, & Las Vegas to hitting the big time and making all the adjustments necessary to survive with his peers. In the early days, it was party hard, and everything happened so fast that all of the sudden he is in the ring with grizzled veterans in the WWE rings across the entire world and picking up tons of knowledge & serious confidence. Listen to Shawn as he transitions from a rookie to the world of tag team wrestling, then singles competition, & to the top of the WWE. Shawn will take you through the stress, the difficulty, the pressures, & anxiety that ultimately burned him out, as he was always in a war with himself to achieve the monarch of being the greatest entertainer that ever lived. Shawn will share candid stories and be asked about the challenges that he went through in his life that ultimately metamorphosed himself from the crazy teenager to a father that loves his wife, kids, & lifestyle away from the ring. A true transition will be detailed throughout the nine hours of footage shown, which tributes whom we now call “Mr. WrestleMania,” as he gets ready to ride off into the sunset and possibly end a storied career in the very near future. The flow of these segments with the matches inserted throughout really blends perfectly.

Nothing better can be produced the way it already has. The WWE sets the bar for the most magnificent, well-produced, & perfectly clear video productions in high-definition & Dolby surround sound that you can rarely find better anywhere else.

There are no special features really in the latest WWE Home Video, but there are three options with alternate commentary with Michael Cole & Shawn Michaels that really provide a different look & understanding of some of the greatest wrestling matches in the WWE ring. These are definitely worth taking a listen to with your free time.

A Boy In A Man’s World

The veterans bring out the best in the charismatic tag team.

Best friends & party animals in Vegas take the fun in the ring together.

The Rockers vs. The Hart Foundation
Madison Square Garden — November 25, 1989

The legendary Hart Foundation show The Rockers all about tag team wrestling.

An unseen match that is a lot of fun to see for the first time ever.

Always Having Fun With Davey

Another great match that you would forget about, but displayed for you here.

Shawn shows us no matter what the style of his opponent, he still makes the best out of any situation he’s put into.

The Kliq members go all out.

Another unique blend of wrestling styles that compliment one another greatly.

The heat in this match back in England is incredible.

This Is Going To Be Art

A great match, but Kane wants to make sure his brother doesn’t get the gold.

Michaels is back on track after a lengthy hiatus away from the ring.

Anytime Shawn & Ric are in the ring the respect & satisfaction are easily displayed.

What a match…One to remember! Totally a classic WRESTLING match.

Tribute To The Troops

Shawn came from a military background, so he dedicates this one to all those who serve like no other man can do.

Michaels gets close, but not enough to prevail with the gold here.

Orton gives Michaels a run for the money here.

A great wrestling feud that culminated with a fantastic wrestling match.

Who can forget one of the most recent historical ring classics ever witnessed in the squared circle in the biggest wrestling event of them all.

Final thoughts & lasting memories coming directly from “The Showstopper” himself.

Solid Wrestling, great analyzing, & in-depth interviewing make this one of the strongest choices out there for any true wrestling fan of the last 25 years. This DVD not only takes you through the evolution of the all-time greatest entertainer ever, but perhaps provides closure to the final chapter possibly upcoming in the professional career of “The Heartbreak Kid” Shawn Michaels.

Buy this DVD & absolutely enjoy what you have purchased. There is no need for a remote control to skip around here: just watch, listen, & be entertained.

We all remember many great classic matches with “The Icon” and the likes of Mankind, “The Nature Boy” Ric Flair, Triple H, “The British Bulldog” Davey Boy Smith, & Bret “Hitman” Hart among others, but this DVD will dig up some unique matches that they may have had that you do not necessarily remember, as well which are great calls. Surely everyone might remember Survivor Series ’97 (where “The Hitman” got screwed out of the WWE Championship with Shawn Michaels), or maybe even Survivor Series ’92 (where Bret wrestled Shawn in an incredible WWE Title defense), but in this DVD you will be treated to matches just as good, but not really seen. The match chosen is a dark match from Ottawa, Ontario, Canada on June 2, 1992 for the WWE Intercontinental Championship between Shawn & Bret. The fact that you are getting many rare, yet just as exciting wrestling matches instead of the more memorable, already-seen bouts makes this even better, simply because you are not getting as many rehashes of previously-seen HBK matches. There are plenty of what I would call “gems” here that will be truly exciting to once again witness that you may have surely forgotten about from yesteryear.