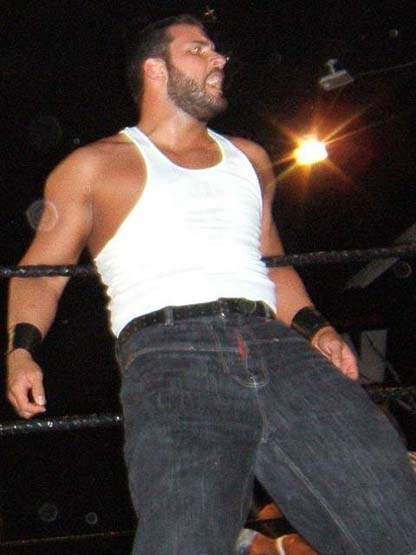 Alan Wojcik: What were the circumstances that led to you getting a tryout and eventually a developmental deal with WWE? Talk about the tryout experience so others can learn what to do right.

Eric Perez: I was working for WWC in Puerto Rico we had a show the day before the New Year’s Revolution PPV in PR and on that show I got busted open in the back of the head and had a small fracture on my right shoulder 15 seconds into the match, they sent referees out there telling me to stop it and I said no. I wrestled for 15 minutes (not a smart move…lol) but I did it. After the show I went to the hospital to get it taken care of. At around 3am I had already paid but no stitches or service for that matter so I decided to go home. I woke up at around 8am drove to the hospital…again. Talked to whoever was at the counter, explained what happened and they stitch me up. After I got out of the hospital I had 3 voicemails from the WWC office telling me I had an interview with WWE officials at the PPV. I went there got interviewed and eventually got a try out at DSW.

Alan Wojcik: You were part of the now defunct Deep South Wrestling developmental promotion run with Joey Hamilton. Talk about the DSW experience and why do you think DSW was transferred to Florida Championship Wrestling?

Eric Perez: It was a very good experience, I had never been properly trained at the time all I did was learned the basic bumps and the rest I did what is called “on the job training” you learn as you go basically very old school very good way of training.  So everything was new to me but I picked up fast and learned a lot from Bill DeMott and Jody Hamilton.

Alan Wojcik: During 2006 you were part of two successful tag teams. The first with current Raw superstar Montel Vontavious Porter and the second was with Sonny Siaki (Urban Assault.)Talk about them as partners and as people.

Eric Perez: They are both very good performers very talented in their own way. MVP has been US champ and tag champ in the WWE and Siaki was X division champ in TNA.  As people MVP is a man who stands his ground in what he believes is right not only for business but for himself as well. Siaki was a bit more selfish when it came to doing business.

Alan Wojcik: Did WWE help the talent in any way moving from suburban Atlanta to suburban Tampa and talk about the adjustment to a different climate?

Eric Perez: Yes they did. They took care of everyone’s lease and they gave us money for expenses to move. I adapt to wherever I go. The only thing that I liked about GA is that it was convenient everything was a walking distance in FL everything was a drive, but I think I did ok in both places.

Alan Wojcik: Describe a day at the FCW training facility and what roles do Dr. Tom Pritchard, Steve Keirn, Billy Kidman and other play in the company?

Eric Perez: At first we worked out in a baseball facility, we got kicked out from there the little kids were not paying attention to their baseball coaches and paying too much attention to the wrestling. Then we moved to a warehouse it was hot, and dirty but Steve Keirn would be on top of that all the time because he didn’t like dirty places so he was always cleaning as well as directing traffic when it came to the training itself. Dr Tom was always paying attention to detail in everything we did in the ring, showing us how and when to do stuff as well as telling us how to apply different rules to every situation and keeping us up to date in what new rules WWE had…He also got in the ring and worked a 1hr Broadway (time limit draw) with Heath Slater, that was impressive. Billy was teaching us how to apply holds as well as teaching to whoever was interested in learning high flying moves. When Norman Smiley came on board he took over teaching the holds (I mean Norman has forgotten more holds that some people will ever learn) Dusty came on board later to run the TV and work with promos (who better that him for that)…It is very good environment that some people did not appreciate because they don’t know what is like to be in other places.

Alan Wojcik: During your FCW run you were part of a successful tag team with Primo Colon, becoming the 1st FCW Tag Team champions. What made that team successful and why weren’t you brought to the main roster when he debuted with his brother Carlito?

Eric Perez: It was successful because we had chemistry plus we used to tag in PR and I have no idea why I was not put in the mix with both of them or just with him for that matter…

Alan Wojcik: Over your time with WWE you have had numerous valets/manager including Miss Angela Fong, Shantelle, G-Rilla and Armando Alejandro Estrada. What do you feel the valet/manager role in a wrestling match?

Eric Perez: They have many roles, so it all depended on what they have to do for the match. Sometimes they just put a hot chick in there to be kind of a flower to make things look better, sometimes is to just talk crap to get more heat for the guy who is working. All the managers and or valets that I have had I always wanted them to be or do something special as long as they recognize what they have to do and don’t try to take the attention for them everything will work out great.

Alan Wojcik: At one point you went from Eric Perez to Eric Escobar. Was that an office decision or something you did on your own and why was it done?

Eric Perez: We wrote like 5 lists of 10 names each that we liked we sent them to the office and they picked…Thank God I picked cool names all across the board.

Alan Wojcik: During your time in FCW numerous talent members were brought to the main roster including Ted DiBiase, Drew McIntyre, Kofi Kingston, Sheamus, Trent Berretta, Tyson Kidd, Ezekiel Jackson and Dolph Ziggler. At any point did you question yourself about your status with the company?

Eric Perez:  Not really, because every time I spoke to writers, agents and the office themselves they said everything was good meaning in ring work, promos, attitude etc. but they just haven’t found the right spot to put me in the mix, so I just did my time because they don’t like liars so I guess they would never lie to anyone…

Alan Wojcik: On the decade of Smackdown special (October 2, 2009) you debuted on Smackdown as Vickie Guerrero’s new boyfriend. Talk about the day you were told and what was it like working with Vickie?

Eric Perez: I was the last person to find out, I think at one point even John Cena knew about it and was asking me if I had done my thing. It was nerve racking but I think it went well. It was great working with her. She is a classy lady with a world of knowledge.

Alan Wojcik: Over your time in WWE you had done numerous dark matches. Is the dark match talent treated different than someone who is part of the three roster brands?

Eric Perez: It’s a mixed bag that one…Sometimes it is; sometimes its not. It all depends on who’s working the dark match, how much interest they have in the person etc. Sometimes it sucks because they want you to show what you can do in 3 minutes…Not possible.

Alan Wojcik: While appearing on TV were you working house shows and if so who did you travel with on the road? What is the road experience like?

Alan Wojcik: Over October and November you appeared on Smackdown and Superstars eventually “dumping” Vickie on the November 27th Smackdown following a loss to John Morrison. Was the plan to have Vickie get revenge over several weeks?

Eric Perez: I don’t think they even know what the plan was to be honest. I was on a need to know basis.

Alan Wojcik: You were defeated by Kane on the December 18th Smackdown as a Christmas gift from Vickie. What were you told by creative was next before you got the call or email you were released? Who handles the release from the WWE office?

Eric Perez:  I was actually told the same week at the Smackdown tapings they were looking for something to put me back on TV. That happened on a Tuesday and got released on Sunday by John Laurinaitis. I guess that’s the storyline I’m working now, I don’t know.

Alan Wojcik: As we do this interview you are working for WWC in Puerto Rico. What is the next step for Eric Perez? Is it working exclusively in Puerto Rico or after the 90 day clause expires can we expect to see you in TNA or Ring of Honor?

Eric Perez: I’m just taking things 1 day at the time, there are some offers in the horizon I just have to sit down and think about the pros and cons of my actions but you never know. When others said I couldn’t do it I did it so we will see.