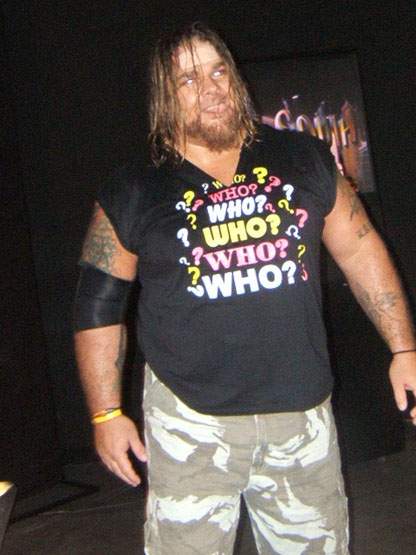 Bill Demott Interview Recap
By: Bob Colling from  www.pdrwrestling.com
(WWF/E, WCW, TNA, ECW, ROH and other reviews all in one place! Including recaps of never televised WWF/WCW house shows!)

Jack plugs the promo last event that Bill Demott will be participating in. Demott likes going to fan fest to meet fans and see people that he hasn’t seen in quite sometime. Demott really likes the event taking place in Atlanta, GA because that is home for him. Demott is most excited to be reunited with Kevin Sullivan.

Bill along with DDP, Ted Dibiase, Lex Luger, Howard Finkle and many others will be appearing for Promolast on June 4th and 5th in Atlanta, GA.

Demott met Chief Jay Strongbow during a WWF show where he was told Strongbow didn’t have any use for Demott and a buddy of his. Demott talked about Strongbow in his book. Demott mentions that the editing of his book taking a long time. He hopes that his book is out around the holiday time. He wrote the book himself and puts over the guy who is helping him edit the book.

Jack talks about a Dungeon of Doom reunion which Demott would be totally down to do. Demott mentions again that he can’t wait to see Kevin Sullivan who he hasn’t seen in years. Demott really liked the Dungeon of Doom and was lucky to have been apart of it.

Barbie brings up Konnan joining the Dungeon of Doom. Demott says that Konnan always put himself in the best position and mentions that Konnan never really lasted that long in the Dungeon. Demott preferred to work with Konnan instead of against him.

Jack brings up Damien Demento and asks if Demott has any good stories about him. Demott talks about Damien pitching a character to Vince McMahon which was named 3D where he would only work PPVs and need his own rooms to pull it off. Demott jokes about Demento’s You Tube things as he doesn’t know what they are all about.

Joel calls in to ask about Goldberg and asks if Demott saw a promising new star in him. Demott doesn’t think that anyone knew what was going to happen with Goldberg. Demott puts over Goldberg as a great guy and is fine with the possibility of that being his claim to fame. Demott tells Jack that the way Goldberg presented himself helped out his ability to get over.

Joel also asks Demott about Josh Matthews commentary skills while working with him on Velocity. Demott doesn’t think that Matthews gets the credit that he deserves. Demott says that Matthews helped him with the timing aspect of broadcasting. Demott believes that Matthews is a great commentary. Demott finds Matthews backstage character is very cheesy.

Howard Finkel is brought up and Demott considers Fink to be the best ring announcer ever. Mean Gene is also brought up and says that if Gene likes you he will make sure you are kept at ease. Demott really liked doing interviews with him. Demott thought having the adlibs was the best option for him.

Gene calls in and talks about a match with Big Bubba at WCW Souled Out 1997 and puts over the match. Gene asks what it was like to work with Ray Traylor. Demott loved Ray Traylor and says that he wasn’t booked to be on the pay per view as Konnan was suppose to be on the show but he had a “headache”. Demott thought the match with Traylor was a pretty good match.

Gene also asks about Deep South Wrestling and the issues he had with the higher ups. Demott believes that the higher ups had issues with himself and Jody Hamilton. Demott thought it was a good developmental company for WWE. Demott doesn’t believe that DPW was what WWE was looking for. “it’s the best feeling ever” when he sees people he trained on television.

Jack brings up The Miz and asks what Demott thinks about the character. Demott thinks that Miz has really benefited from himself. Demott puts over Miz as being a gifted performer. Demott also says that Miz is the most annoying person to talk to. Demott is proud of The Miz and is happy to see how far he has gotten.

Gene also asks about an Iron Sheik. Demott talks about having to find Sheik before a show where they found Sheik in a room full of candles and he was getting high. Demott has never had a problem with Sheik.

OIB asks a question from the message board whether Demott liked being apart of the Dungeon or the Misfits. Demott has more fun with the Dungeon while in the Misfits he had fun because he was allowed to be himself. Demott also liked the First Family.

Demott dares anyone to tell him that they had a issue with Jimmy Hart. Demott does say that Hart does have a mouth on him and will let you know if you are doing something wrong. Demott though that Hart was a great babysitter. Demott also jokes about Hart not taking part in some yoga.

Jai calls in and asks Demott what does he think about the PG stuff. Demott doesn’t quite understand what that means. Demott says that WWE can get away with doing whatever they want. However, he still wouldn’t allow his kids to watch the show even if he was still wrestling.

Demott wouldn’t compare WWE NXT to Tough Enough. Demott talks about the guys on NXT already being under contract and doesn’t understand the premise of the show as people are learning from wrestlers what they should have already learned from being in the developmental system. Demott is not a fan of the show. “When I see Ryan Reeves dressed up as a gay cowboy, I have had enough”. Demott does not like the David Otunga guy. Demott doesn’t like the character Heath Miller is playing (Heath Slater).

Demott can not believe that the WWE got rid of Daniel Bryan as he was the only kid who can work. Barbie mentions that Bryan told everyone that he was really Bryan Danielson. So, Demott says he was fired twice. Demott jokes again about yoga classes. Demott would go to a yoga class with Raven, Kimberly and DDP just to watch the class.

Demott does say that he was the first 911 character in ECW. Demott believes that if he had a longer run in ECW the opportunities outside of ECW may have not happened. Demott puts over everyone in ECW as being fantastic. Demott enjoyed the early days of ECW.

Demott no longer has the beard tail as he recently just shaved!

Demott jokes about making a surprise return with R-Truth being his teacher and he will be on the season 2 and 3 of NXT. Hilarious series of comments from Demott! Demott also jokes about Funaki having worked for WWE for about 45 years. Demott also says that Steve Blackman works for the company but they don’t know where he currently lives!

Barbie asks Demott what his thoughts on the Sarge were. Demott believes that Sarge was the only person ever kicked out of the Dungeon of Doom because he was too violent. Demott puts over Sarge’s wrestling ability.

OIB asks if Demott has any funny stories about Al Snow. Demott says he doesn’t and asks what Al Snow has done. Demott jokes about saying he has nothing on Al Snow. Demott will never tell a Al Snow road story. Demott does talk about Al Snow telling a four minute story at a wedding. Demott says that Al Snow dropped the F bomb a few times and everyone was left silent. Demott loves Al Snow as Snow saved his life outside of Tough Enough III. Demott believes that Snow should be brought back to WWE. Demott would love to comeback to WWE as he has lost 30lbs and he feels good. Demott mentions that he has been contacted about going to TNA, but he is loyal and would go back to WWE. Demott would go back just to have fun. Demott would like to go back to see the young guys try and beat him up. Demott wouldn’t be afraid to fight anyone currently in WWE. Demott has become a big fan of Ted DiBiase Jr. and Cody Rhodes. Demott jokes that all the guys in TNA are 10 years older than him and has worked with him. Demott would like to work with Sheamus to see what he is all about. Demott throws out the fact that Jack Swagger and Kofi Kingston were Deep South guys. Along with Tyson Kidd and believes that his current hairdo is perfect for him.

Demott tells a story about he got yelled at because he made the Great Khali run in DSW. Demott does add that he did beat his ass on more than one occasion because of that. Demott would hit Khali across the chin with his knuckles if he smiled.

Demott has never been to wrestlers court, but he has attended a few of them. Demott has seen a few grown men broken down. Demott says that sort of thing will be in his book. Demott says that WCW has wrestlers court as does WWE. Demott says it is a very serious situation because the office can not save you from the boys. Demott talks about Zac Gowen being kept home for the last six months of his contract because they knew he was going to get his ass kicked.

Demott talks about Zac Gowen and how his attitude changed when he got to WWE. Demott says that Gowen believed what everyone was saying about him and he thought he was the best thing going. Demott says that Zac came across very arrogant.

Afro calls in and asks about Chris Kanyon and his thoughts on Kanyon. Demott is surprised to hear that his last TV match was with Kanyon. Demott believes that it was Kanyon’s last TV match. Demott thought it was a shame to hear the news of Kanyon’s passing a few weeks ago. Demott talks about how no one wants to talk about wrestlers when they are alive, only when they die. Demott got along with Kanyon and says that Kanyon loved wrestling and was very serious about it. Demott believes that Kanyon got a little bit ahead of himself in WWE. Demott puts over Kanyon as a great wrestler and he had a great mind.

Demott is happy for Lex Luger and knows that Luger has been through a lot of stuff over the past few years. He is looking forward to see Luger at the fan fest.

Jack thanks for Demott coming onto the show. Demott would gladly comeback onto the show.
That’s the end of a very funny and entertaining hour long interview with Bill Demott!

Promolast on June 4th and 5th in Atlanta, GA.