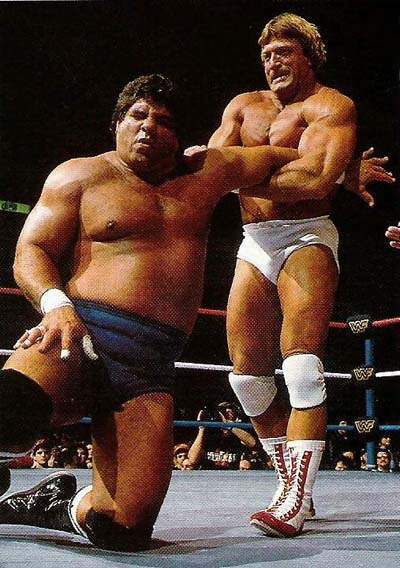 Paul Orndorff Interview Recap
By: Bob Colling from  www.pdrwrestling.com
(WWF/E, WCW, TNA, ECW, ROH and other reviews all in one place! Including recaps of never televised WWF/WCW house shows!)

Jack and OIB welcome “Mr. Wonderful” Paul Orndorff to the show about twenty minutes into the show.

Orndorff mentions that he is a multiple time Hall of Famer and has another ring that is twice the size of the WWE ring he got. So, you can imagine which one he wears. Here is a hint, its not the WWE ring!

Jack plugs the Promo Last event that Orndorff will be participating in. Orndorff enjoys being apart of the Fan Fest scene as he enjoys talking to the fans.  Paul along with Kimberly, Booker T, Ted Dibiase, Lex Luger, Howard Finkle and many others will be appearing for Promolast on June 4th and 5th in Atlanta, GA.

Orndorff says he wasn’t into the phony stuff as he never watched wrestling. Once he got done playing football he started to get involved in the wrestling business. Orndorff has always respected people in wrestling and respected everyone as soon as he entered the business because he respects all athletes.

Orndorff started watching wrestling with his uncle and wanted to know how they did some certain things. Orndorff had always liked to wrestle and would wrestle his fellow football teammates. Orndorff father in law knew Eddie Graham and about eight months later he had his first wrestling match. Orndorff mentions that Bob Backlund and Hiro Matsuda were his trainers. Orndorff says that Matsuda did try to stretch him.

Orndorff always had the desire to do something as long as he was interested in what ever he was going after. He always remembered that Bob Orton Sr. would tell him to learn his craft. He would want to be the best wrestler he could be.

Orndorff talks about the differences between WWF and WCW/NWA. Orndorff says that he was apart of the WWF when it was hot. Orndorff was with the WWF six months before it was decided that Vince McMahon Jr. would be taking over the company. Orndorff thought that they were ripping them off in terms of money. Orndorff recalls McMahon promising him to make more money that he ever made. Orndorff says that everything he was told was going to happen, actually did. Orndorff could have made a good living with a contract from Jim Barnett but liked to get things started instead of sitting at home. Orndorff went to Japan about five times during the time he was waiting to go to NWA. Orndorff remembers being told he was going to be the NWA Champion but that never happened because he wasn’t apart of a clique.

Jason calls in and asks about Wrestle Mania and if he was surprised the concept lasted twenty years. Orndorff was always focused on that one night, and never really thought about anything else after that. Orndorff says that he was told it was going to be happening every year depending on how well the one he participated in went. Orndorff believes that the card he was apart of was the best one put together in terms of workers. Orndorff talks about how hot the product was back then.

Jack brings up Hulk Hogan and Orndorff says that people bought into the character and they pushed him. Orndorff agrees that Hogan may have not been the best wrestler but he was in the right place at the right time. Orndorff enjoyed working with Hulk Hogan.

Orndorff loved it when the fans booing him when he turned on Hogan. Orndorff discusses all the things the fans would throw at him and how much they hated him. Orndorff also talks about people trying to tip over a cab he was in and the cab driver left the car because he was afraid! This happened right after turning on Hogan at MSG. Orndorff really enjoyed that angle as he believes it was the best.

Jason also asks Orndorff about the steel cage match he had with Hogan. Orndorff says that the cage match proved that he was the best heel at the time and says that people put over that cage as the best cage match ever to happen.

Jack asks about Bill Watts and what it was like to work for him. Orndorff liked it but calls Watts a “butt hole” and he has told that to Watts face! Orndorff actually likes Watts a lot. Orndorff is sure that Watts fined him but he can not remember.

Dewayne calls in and asks about Orndorff fight with Vader. Orndorff says that it took one shot to the left side of Vader to knock him out. Orndorff also had flip flops on and hit Vader several times and almost broke his toe! Orndorff says that Vader’s lip looked like a watermelon. Orndorff says that Vader sucker punched him and when he got up, he beat Vader up good. Orndorff recalls what made Vader angry as Vader had to do a interview. Vader wasn’t all that happy about it, and Orndorff is pretty sure that Kevin Sullivan tried to set up Vader beat up Orndorff. Orndorff says that if he had a knife would have cut his throat. Actually, he would cut off his ear! Orndorff got along with Vader before that but says that Vader was a jerk to everyone and doesn’t know what was Vader’s issue. Orndorff talks about Vader being a bully in the ring and says that he never cared for Vader.

Eric calls in and praises Orndorff as being highly underrated. Orndorff agrees with Eric’s statements. Eric brings up Orndorff’s match with Tito Santana in 1984 for the WWF Intercontinental Championship. Orndorff believes that is a top 5 match of his career. Orndorff really enjoyed working with Tito Santana. Eric doesn’t understand why Orndorff didn’t win the title from Hogan. Orndorff says that people were afraid that he would have been competition to Hogan. Orndorff believes that if he was given the belt for 4-5 months and have Hogan beat him after that it would have elevated Hogan greatly.

Orndorff discuss hunting and how he likes to hunt deer and that he brings his nephew out to hunting with him.

Gene calls in and asks about Orndorff’s ability to cook up a nice hog. Orndorff talks about killing the hog and cooking him for 10-12 hours. Orndorff enjoys to eat wild game. Orndorff especially enjoys to eat little rabbits.

Gene also asks if Orndorff has any funny Iron Sheik stories. Orndorff has a lot of stories about Sheik. Orndorff mentions that Sheik got arrested going into Canada and that Sheik didn’t know that the stuff he had was illegal.

Gene mentions Orndorff’s stinger from his match at WCW Fall Brawl 2000. Orndorff says that he had to have surgery from that match and how he has lost 90% of use from his arm and that his left arm is three inches shorter than his right arm. Orndorff mentions that if he gets hit by a car from behind it could paralyzed him or even kill him.

Gene lastly asks which city has the best ring rats. Orndorff says “I couldn’t tell you anything about that, bro.”

OIB asks who was tougher trainer Orndorff or Sarge. Orndorff talks about Sarge being a midget and himself not being one. “He is a fat, short midget. Cased closed”. Orndorff hated training people in Power Planet and didn’t like training dumb people. Orndorff was only joking as he liked training the kids in the Power Plant and liked Sarge. Orndorff can’t remember the people he trained and jokes about his age as he is 60 years old.

Chris also asks about Paul Roma and what it was like to work with him. Orndorff liked working with Roma and says that Roma needed to catch up with him early on to work well with him as a team. Orndorff says he was proud of Roma’s work in WCW. Orndorff agrees that Roma was underrated. Orndorff doesn’t know why Roma quit WCW and believes that Roma had a lady friend who didn’t want Roma away from his family for such a long period of time.

Jack brings up Orndorff’s match with Cactus Jack in 1993. Orndorff thought he had some great matches with Cactus Jack. Orndorff wasn’t surprised that Jack became a big star because someone just needed to give him a chance. Vince McMahon gave him that chance and puts over Foley as a very smart guy. Orndorff recalls a spot where he suplexed Jack over a railing and thought Jack broke his back.

Joel calls in and asks if it was easy to work for the WCW creative side. Orndorff says their were plenty of egos but he enjoyed working in that department. Orndorff says that everyone was trying to keep their jobs. Orndorff didn’t look upon any of the guys with a ego any differently.

Joel brings up New Japan and talks about their change of style to MMA instead of Strong Style. Orndorff liked the style as it was something he enjoyed doing. Orndorff felt that he had some good matches in New Japan. Orndorff feels that they should have kept that style as he has heard it has gotten pretty bad over there now.

Orndorff says he has never see Meng in action so he can’t confirm whether or not he is tough. However, he has heard that Meng is a tough guy.

Jack brings up Adrian Adonis and Orndorff says that Adonis was a good worker. Orndorff compares Cactus Jack to Adonis in regards to some crazy bumps.

Ruben calls in and asks for Orndorff’s thoughts on Iron Sheik and a Union for a professional wrestlers. Orndorff thinks that the Sheik is a fat. Orndorff believes that they needed a union and mentions that they all would have had insurance, and retirement benefits. Orndorff says it would have taken all the top guys to rally together to get the Union done. Orndorff finds it sad that they never were able to get a union because a lot of the wrestlers are crippled from wrestling. Orndorff was in favor of having a union, but you needed to keep that under wraps or you’d be blackballed from the wrestling company. Orndorff feels bad for Iron Sheik as he is all crippled now and mentions that his daughter had passed away.

Jack plugs the Promolast event that Orndorff will be participating in. The event is in Atlanta, GA June 4th and 5th. Orndorff isn’t sure he will be on both shows.

Orndorff would love to comeback on the show down the line and would be more than happy to help out the IYH crew. Orndorff is guaranteeing ratings will go up and wants a cut of the money!

That’s a wrap for the interview. Very fun interview with Mr. Wonderful. Promolast on June 4th and 5th in Atlanta, GA.