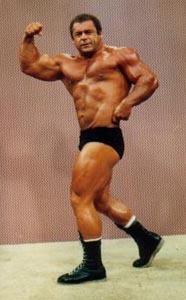 IVAN PUTSKI SHOOTS HARD ON SHIMMER FOR FALSELY ADVERTISING HIS “GRANDDAUGHTER,” HIS PERSONAL STEROID USE IN 80S WWF, LEGENDSMANIA, AND MORE By WorldWrestlingInsanity.com

For generations, fans have seen wrestlers with power.  But none of them compared to the massive might of the man behind “Polish Power.”  Now the legendary I van Putski comes to ClubWWI.com for an uncut shoot interview just as powerful as he is.

Ivan’s unbelievable strength has brought him success in many avenues of life.  But the WWE Hall of Famer is most loved by grappling fans for his legendary wrestling career.  Now, just a few weeks prior to his appearance at the LegendsMania fan convention, where he’ll take part in the VIP question and answer session hosted by James Guttman, Pustki joins James on  ClubWWI.com to talk about his storied career.

From “Ivan Patoosky” to singing opera to Gordon Solie to his Hall of Fame induction, Ivan leaves no subject off limits. For a full list of subjects, head to:
http://www.worldwrestlinginsanity.com/am2/publish/newsnotes/ClubWWI_Ivan_Putski.shtml

Ivan is one of the happiest people you’ll talk to.  In fact, he told that to James Guttman directly during his 30 minute ClubWWI.com shoot.  That’s why his character was so relatable.  But there are things that make him unhappy.  At one point, when talking about Ivan’s family, James comes across one – lying.  Guttman asks about Ivan’s “granddaughter” in SHIMMER Wrestling.  Putski knows all about her, but she’s not his granddaughter.

JG laughs and, noting Putski’s tone, says, “I guess you didn’t sign off on that.”  Ivan answers.

“No.  I know who you’re talking about and we gave them a call about that.  My lawyers called them and told them they need to stop using that or they’re gonna get sued.”

Surprised, JG says that it happens a lot in wrestling where promoters sometimes… well, Ivan Putski tells it to ClubWWI.com listeners best…

“Lie.  You know, it’s bullshit.  You know that.  They got something good, they try to jump on it, which isn’t right.  You work your butt off to build your name like that and then some trash comes along tried to use it, you know?”

Ivan and James go on to discuss the situation, whether SHIMMER contacted him first, what his son Scott is doing now, and more.  No topic is off limits in Ivan’s ClubWWI.com shoot interview and one of them is steroids.  Ivan was not only a part of the WWF during its most scrutinized days for steroids, but he was one of the biggest.  How prevalent were they at the time and did Putski take part?

“Well, 1980, you know steroids then were not that prevalent as they are now.  They were just coming out.  Yeah.  If you didn’t use them, the other guys using them had a jump on you.  And I’m not gonna lie.  Hell yeah I used them.  Cause if you didn’t, Superstar (Billy Graham) or these other guys had an edge on you.  The way we did them – shit – it’s nothing compared to how they use them now.”

Putski goes in-depth on ClubWWI.com about steroids then vs. steroids today, the usage in the 1980s, the effect it had on him, benefits of them, the importance of genetics and much more.

This ClubWWI interview is the latest in a long line of guests showing up at the LegendsMania convention in Atlanta, Georgia on March 12 and 13th (LegendsMania.com).  Jim Cornette, Robert Gibson, and Greg Gagne have all joined James Guttman to discuss the event and Ivan does the same.  Legends like The Koloffs, The Rock-n-Roll Express, The Midnight Express, Jim Cornette, The Armstrong Family, Demolition, and many more will join host James Guttman, making his first appearance of this kind, for a massive question and answer session with fans at the event.  Guttman is excited about the show and so is The Polish Power, reuniting with his former tag champion partner Tito Santana.