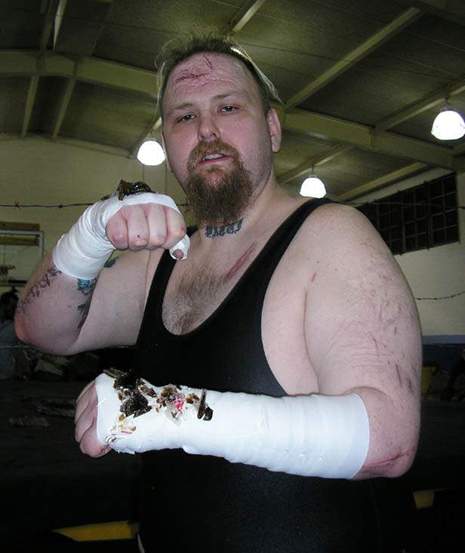 Ian’s career has spanned 17 years and he has traveled the world and wrestled in such companies as ECW, USWA and Global that gave him television exposure and helped build his name. He started IWA Mid-South 11 years ago when he moved to Kentucky after he fell in love with Patti. This will mark the end of an era as he wrestles his final match and who better to face in that match than his final student that graduated the Ian Rotten Wrestling School. Ian and Mickie have had many memorable matches in more than just IWA Mid-South but I don’t think anyone will forget the 2003 TPI or the 2006 KOTDM or even the match after that in Streamwood. This one is going to be something to remember even more than those other matches as Ian has promised to bring the house down on his final night inside a wrestling ring. Hopefully everyone will come out and support IWA Mid-South and give Ian a great sendoff into retirement.

Mike Quackenbush is out of action until December due to the concussion suffered at 2007 TPI. This will be his first or one of his first matches back in action. Of course, there are plenty of issues with Mike Quackenbush and Chuck Taylor dating back to the last IWA Deep South show and then the 2007 TPI. Quack also has lots of issues with his former friend Chris Hero. That feud developed in Chikara and neither man has fully forgiven the other since their split. Eddie Kingston would love nothing more than to defeat his mentor and trainer in Quack. Quack will have his hands full in this one as he’ll have to outlast each competitor. The hatred between Kingston and Hero was obvious to anyone that saw the 2007 TPI and this one should be that much more brutal and heated now that the IWA World Heavyweight title is on the line. This could definitely be a show stealer and match of the year candidate for IWA Mid-South right at the end of the year.

This will be the third encounter for these two men as this feud has gotten pretty heated in a hurry. Deranged has worked hard and put his body through hell over the years to make a name for himself in the death match style. He has taken his lumps and EARNED his respect in that style. C.J. Otis came along and after his SECOND hardcore match, he proclaimed himself “The Death Match Destroyer.” Deranged has taken great offense to this and has made it his personal mission to teach C.J. that he has to earn that nickname. C.J. pulled off a victory the first go round and in the rematch, they went to the floor and got counted out and needed to be pulled apart. This time, there will be no count outs, no pull aparts, no rules. This Circle City Street Fight will go a long way in giving Deranged his opportunity to show C.J. Otis what death match wrestling is all about.

This match will be a unique battle between a former IWA Mid-South World Heavyweight Champion that shed the hardcore label as champion and took on several competitors in fantastic wrestling matches before losing the title to Chuck Taylor and a legend in the business that can do several different wrestling styles well. Can Toby turn this into a rugged brawl and ground the high flying Scorpio? Can Scorpio use his experience, speed and agility to stay one step ahead of the former champ?

The Sandman vs. Drake Younger

The stars are coming out in full force for this event to be a part of this special night as it is Ian Rotten’s retirement. Make sure you join us for this huge party!

Tickets are on sale right now for this event.

You can go to www.paypal.com and send payment to Patti at [email protected]

You can also send a check or money order made payable to MICKIE KNUCKLES to: