Jake “The Snake” Roberts training for one more run? 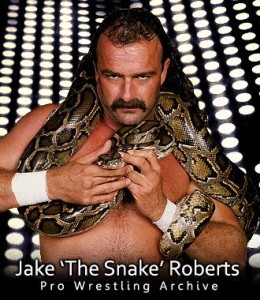 But Monday he begins perhaps his biggest challenge when Jake “The Snake” Roberts moves in with Page in a home Page recently bought in Atlanta. Roberts, whose wrestling career was derailed multiple times by substance abuse issues, will train with Page while cameras roll for a planned documentary. The idea is to get Roberts, 57, back in good enough shape for one more run in the wrestling business.

Page, 56, told newsday.com Sunday that he called Roberts — whose weight had ballooned up to 302 pounds — in Roberts’ hometown of Gainesville, Texas three months ago.

“And I told him, ‘If you can really do this — and you have to prove it to me [by doing the program] for six or eight weeks,” Page said. “‘I’ll freakin’ get a place in Atlanta. I’ll bring you up, and we’ll continue this journey.’”

Roberts was filmed in Texas when he started the yoga program, which Page developed to deal with the injuries he suffered while in the squared circle. Page said that Roberts lost 20 pounds in the first 3 ½ weeks of training and is now down approximately 35 pounds.

“Jake does not want to be seen the way he was seen at the end,” Page said.

Roberts’ demons have been chronicled in the 1999 Barry Blaustein documentary “Beyond the Mat” — which included Roberts interviewed in a hotel room after apparently smoking crack — and the 2005 WWE-produced DVD “Jake ‘The Snake’ Roberts: Pick Your Poison.” Roberts’ attempts to clean up includes a 1996 return to a WWE after a three-plus year hiatus in which his real-life born-again Christian convictions were incorporated into his storylines.

Along with the physical training, Page and filmmaker Steve Yu wil work on things like getting the computer-deficient Roberts up to date on using Facebook and Twitter. Page says the idea is to keep Roberts busy with positive activities so he won’t backslide into past habits.

“That house, I reached out to a couple of my friends, and asked, ‘What are we going to call my new crib?’ And we came up with ‘Accountability Crib,’ you’re accountable for everything.”

To that end, Page and Yu said that Roberts will be drug-tested while he’s in the home.

But Page is encouraged by what Roberts has already accomplished, losing as much weight as he has after having being so out of shape in his first workout he couldn’t do more than a couple of exercises without needing rest.

“Bottom line is, everybody wants the comeback story,” Page said. “Everybody wants to see Jake look good, and feel good, and not be a mess anymore. That would be great. I think there are a lot of really positive things that can come out of this if Jake really does it.”