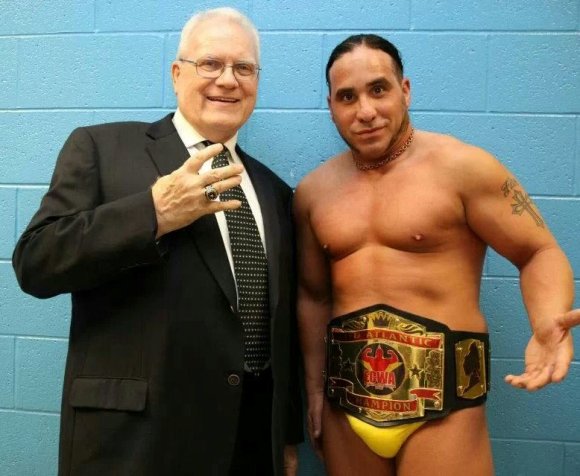 CAC honoree and WWE Hall of Famer James J. Dillon was featured at the ECWA Toys for Tots December 7, 2013 event!

ECWA tore through the Greater Newark Boys & Girls on Saturday December 7, 2013. In front of a loud capacity crowd the stars of the ECWA provided laughs and some breath taking ‘Oh My God!’ moments! WWE Hall of Famer JJ Dillon was on hand and a very popular man as the fans flocked to meet the wrestling legend. All this was in support of the US Marines and their Toys for Tots toy drive which was a rousing success! So what did you miss? Read the recap and results below to find out:

The Asian Nation(Kai Katana & Bolo Yung) defeat Kid USA & Meisure Ooh La La w/Coach Jim Shorts via the frog splash- The mysterious warriors were seeking revenge on the fun loving duo of Kid USA and Meisure Ooh La La after Katana was embarrassed last month. They sure got it here. They mostly dominated the contest with the pin fall after a fall away slam/frog splash combo by Yung and Katana.

Muddy Waters vs. Mark ‘The Dragonfly’ Harro vs. Delaware Dynamo ends in a No Contest as Ricky Martinez attacked all 3 men with a cowbell- All 3 men were newcomers to the ECWA and they didn’t disappoint. We saw amazing chain wrestling , big slams, and fast paced action that only ended because ECWA Mid Atlantic champion Ricky ‘The Model’ Martinez attacked all 3 men with a cowbell. He would then imitate wrestling legend Dusty Rhodes saying he was going to destroy Chris Wylde later on in the evening.

*‘The Boss’ Mike Tartaglia would call out Santa Claus for a special match. But a poorly dressed St. Nick would make his way to the ring to only be defeated by Tartaglia in a few seconds. Saying he was stealing Christmas away from the ECWA fans, he went to leave. But another Santa entered the arena! After back tracking what he said he went to hit the holiday icon only to be repealed. Off came the beard and hat for it to be revealed as ECWA Women’s champion Jessie Kaye! As the fans and Kaye celebrated Renee Michelle would assault Kaye from behind with the Women’s title.

Bobby Shields defeats Matt Saigon via a backslide to even the Best of 5 Golden Opportunity Series at 2-2- In what may have been the fans most anticipated match, these men put on a wrestling clinic from bell to bell. Knowing each other so well, both men had counter after counter for the other’s moves until Shields finally outsmarted Saigon to even the series at 2 wins a piece.

Kekoa the Flyin’ Hawaiian defeats ‘Monster’ Ahtu w/Phil Sly via the Hawaiian Fly to retain the ECWA heavyweight championship- Many fans were shocked to see this match happening so quickly, but these two men were chomping at the bit to fight. As expected Ahtu dominated early with his power and brutality. Kekoa would eventually gain the upper hand with his speed and superior technical wrestling. Kekoa would retain his ECWA title with a thunderous Hawaiian Fly(formerly known as the Spanish Fly).

Jessie Kaye vs. Renee Michelle for the ECWA Women’s championship ends in a Double Count Out- No love lost here. The battling vixens would put on one heck of a display of old school and mat wrestling. Neither would gain the upper hand for very long. Kaye would hit an electric chair when Michelle went to taunt her and it looked to be enough but Michelle would battle back somehow. It ended as both women battled back to the locker room with being counted out.

*WWE Hall of Famer J.J. Dillon addressed the crowd about his career, ECWA, ECWA being the place where the stars of the future are and thanked the fans for their support during his career.

D-line(Body snatcher & Black Ice) defeats LOD(Napalm Bomb & Solo) and Breaker Morant & Apollyon via a Double Spear to retain the ECWA Tag Team championships– What a brawl! All these men respect each other but have a mutual goal… the ECWA tag team titles. And they went all out! Huge displays of power by the tag champs and LOD and veteran poise by Morant and Apollyon delighted the ECWA faithful for well over 15 minutes. Napalm Bomb would steal the show with one of his off the top rope dives. The LOD would look to win it all by keeping Morant and Apollyon down by the resourceful tag team champions keep focuses and waited for their chance hitting a double spear or the victory.

*After the match, the Asian Nation would run into the arena and begin assaulting Apollyon as his partner Breaker Morant was still down outside the ring. Yung would bring in a chair that they would use to batter the ribs of the fallen monster. The assault only ended when Katana would climb to the top rope hitting a frog splash onto Apollyon as the chair was laid across his chest. Apollyon would have to be carried out.

‘Heartkiller’ Chris Wylde w/ WWE Hall of Famer JJ Dillon defeats Ricky ‘The Model’ Martinez w/ Renee Michelle to become the NEW ECWA Mid Atlantic champion- The final chapter… the final battle if you will. Both men left nothing on the table. They went full throttle the whole match. Martinez would show his new mean streak big time as there was no show boating here. Wylde willed himself to victory with encouragement from Dillon and a little 4 Horsemen magic. Dillon would get into the face of Martinez near the end of the match sneakily throwing Wylde the cowbell which resulted in a near fall. Dillon would also pull the ole switcheroo. Martinez and Wylde had just super kicked each other in the face. As both lay out, Dillon tried to complain to the ref when Michelle would try to lay Martinez on top of Wylde…. But Dillon had other plans. Dillon would flip Wylde back over on top of Martinez.. But to no avail. Renee Michelle must have been studying her manager counterpart as she pulled the Horsemen foot hold out of her bag of nasty tricks. She held Wylde’s foot on a Superplex attempt making the champ land on top of Wylde for a pin fall attempt. The end would finally come after a HUGE back and forth battle as Wylde hit the Swanton Bomb.