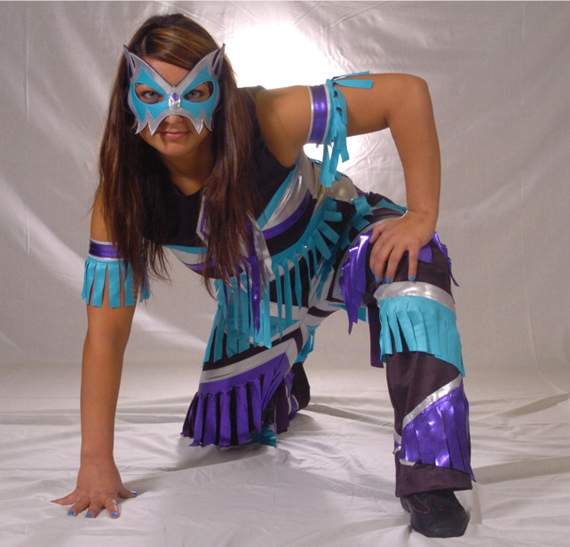 Crafting & “Cruz”ing Up The Ladder: Jamilia Craft & Jennifer Cruz Set For One-on-One Encounter on 3/5 – Report by Jimmy Gentry of WSUWrestling.com

When Jennifer Cruz debuted in WSU in the Spring of 2009, not much was known about this rookie. Cruz, who had a happy-go-lucky personality, was ecstatic about her chance to make waves in WSU. What Cruz lacked in experience, she made up for with her drive and passion for the sport. Cruz’s first year in WSU didn’t turn up many victories, but by the time December 2009 rolled around, Cruz told WSU locker room insiders that she felt she was progressing and learned a lot from the WSU veterans, as Cruz was able to share a locker room with the likes of Mercedes Martinez, Nikki Roxx, Awesome Kong, Molly Holly, Jazz, Alicia, Dawn Marie & countless other stars on the womens wrestling scene.

On 12/12/09, Cruz would pick up her biggest victory to date, when she teamed up with former TNA Knockout Champion, Angelina Love. Both Love & Cruz defeated Rick Cataldo & Jana. Cruz said after the match that Angelina Love was a great influence on her and helped her learn about success in the squared circle.

Cruz would start to gain some confidence, and would start calling herself J-Cruz, embracing her light-hearted side. Unfortunately, an injury would side-track Cruz, and Cruz would miss most of 2010.

Cruz would make her return to WSU at the “Mercedes vs Rain II” event in November of 2010. Cruz brought along with her, the debuting Jamilia Craft. Craft, a flashy rookie, became the second masked wrestler to compete in a WSU ring. (The first masked wrestler was “Big Van Missy”.)

Cruz & Craft would challenge the WSU Tag Team Champions, The Belle Saints. Cruz & Craft would come up short in their championship match. While Cruz has lost in WSU before, it seems frustrations of returning to her less than victorious ways settled in.

Immediately after the match, Cruz was putting down Jamilia Craft to anyone that would listen to her. Cruz would tell reporters such as Frank Krewda of PWI Magazine, Aaron Carlton of Lethalwow.com & Dan MacMillian of Snapmare.com that she “had it” and she was “going to make a big change.”

A different Jennifer Cruz showed up to WSU’s 12/11/10 event, “Alicia vs Roxx II”. Cruz denounced Jamilia Craft and debuted her new tag team partner, “The Sugar Freak” Monique. In a video that aired on the “Alicia vs Roxx II” DVD, Jamilia Craft, who wanted to question Cruz about her words, attempted to enter Cruz’s locker room. Cruz, who somehow found a golden star with her name on it,  to put on her locker room door, didn’t answer Craft’s knocks. After Craft left, Cruz peeked her head out to say that she would only talk to important people, like President Obama! We have no word on how the Obama-Cruz summit went,  but if we get that news, we’ll let you know!

On the “Alicia vs Roxx II” event, Cruz & Craft had two different matches, but while both picking up losses, fans talked about the potential of Jamilia Craft, while blowing off Cruz’s match. Jamilia Craft put up a valiant effort against former WSU World Champion, Angel Orsini. Despite losing, fans & critics talked about how close Craft was and how deep Craft’s game was for a rookie.

As stated above, Cruz found a new partner, debuting Monique. Cruz lobbied for another WSU Tag Team Title match. However, despite a new partner, Cruz was on the losing end of another match, as Monique was pinned in a match against the WSU Tag Team Champions, The Belle Saints.

Cruz was furious after the match, throwing garbage cans, metal folding chairs and anything else she could get her hands on in the locker room. Cruz refused to do a video interview with WSUWrestling.com that night, telling WSUWrestling.com to “back da f%# up!”

At WSU’s most recent event, on 1/22/11, our second iPPV, “The Final Chapter”, which is now on sale on DVD at WSUVideo.com, Cruz & Monique attempted to pick up their first tag team win, challenging The Boston Shore. Unfortunately for Cruz, Monique was pinned again. Perhaps Cruz just has bad luck in tag matches as of late? Whatever the case, Cruz was furious and refused to talk to anyone in the WSU locker room after her match.

On the other end of the spectrum, Jamilia Craft defeated the impressive Allysin Kay. For Craft, it was her first win, and vindicated fan & critics beliefs that she was one to watch. PWI magazine would wind up profiling Craft, just as that, “One To Watch” in one of their recent magazines. That magazine was being passed around the WSU locker room before the show, with wrestlers congratulating Craft on her accomplishment.

With Craft’s early success, positive press and victory, Cruz could not take it any more. Cruz violently assaulted Craft as Craft made her way to the locker room after he win. Cruz told Craft that she heard Craft has been looking for her, and now she’s found her. Cruz said she’ll see Craft on 3/5, at WSU’s  Four Year Anniversary Show.

Jamilia Craft, when asked for a quote from WSUWrestling.com said, “I don’t know why Cruz is targeting me for the frustrations in her career, but now I’m frustrated by Cruz and I’ll be there on 3/5 to make sure Cruz is even more frustrated when she’s looking at the lights again in WSU. I have worked very hard to get where I am and we all take bumps & bruises, and on 3/5, Cruz will be a bumped and bruised Cruz.”

Jennifer Cruz refused to talk to WSUWrestling.com for this story, only telling us over the phone, “I have Obama on the other line, stop callin’ me son.”

Jamilia Craft vs Jennifer Cruz is signed & sealed and will be delivered on iPPV and for fans live on 3/5 in Union City, NJ. WSU officials have deemed this match as a match with Spirit Championship title implications, with the winner of this match rising up the Spirit Title Rankings. For the now heinous Jennifer Cruz, this is a win she needs to justify her change of heart in WSU. For Craft, this is a match that can springboard her WSU career.