Home / Miscellaneous / JBL Interview on Between the Ropes

JBL Interview on Between the Ropes 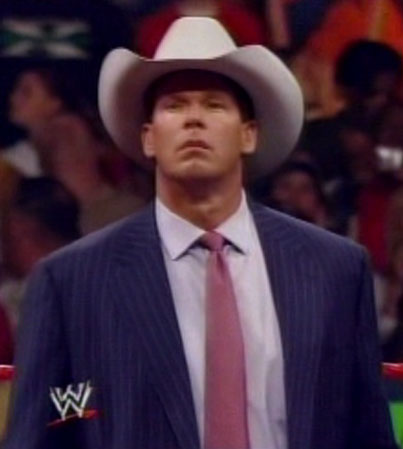 Between The Ropes
February 15th, 2008
Archived online at BetweenTheRopes.com

WWE superstar John Bradshaw Layfield recently sat down with Brian Fritz of Between the Ropes to discuss his recent return to in-ring competition, taking part in this weekend’s Raw Elimination Chamber Match at No Way Out, and more.

Layfield is grateful that he has been able to return to the ring following a year-and-a-half absence due to an injured back and says the time off has allowed his body to heal. “I never thought I’d have the opportunity to return. Getting out of the ring, my back started getting better pretty much right away. And finally all the symptoms from hurting my back – from breaking it to herniated discs – went away. And I felt that I was healthy and I just wanted a chance to come back, because I just didn’t like the way I went out. My back was hurting so bad that I wasn’t able to work out and I was fat and was out of shape. Still out of shape a little bit, but a lot better than I was. And I didn’t want the last memory of me to be that fat, out of shape guy that was in the ring. So I thought I had a chance to do it while I was still young enough, so that was the reason I came back.”

JBL describes his current program with Chris Jericho as “decent”, but admits that he has not been one-hundred percent pleased with his comeback thus far. “I’m not in shape. And I made it through the matches okay. My mind is not there for the ring yet; I feel like I’m … I don’t know a percentage – sixty, seventy-percent there mentally. So, fortunately, I’m with a guy who’s a real pro in Chris Jericho – and a good wrestler. So it made me probably look better than what I am. But I feel like I’m headed in the right direction. Every time I get in the ring I’m getting my mind back, I’m getting in better shape. I’m still ways away. I hope to be one-hundred percent by â€˜Mania. I’m in No Way Out this weekend and I’m looking forward to it, but I hope to have a singles match at â€˜Mania that’s significant – that’ll be dictated this weekend with what happens at No Way Out. But I think I’ll be ready by WrestleMania and be better than ever before.”

Layfield plans to let his physical well-being determine how long he will remain in the ring as an active performer. “I’m forty-one and I’m just going to let my health be the guide. I don’t see why I couldn’t have two or three good years left. But I don’t know that – I didn’t know I was going to have to retire before. If I have any health issues, that will dictate it. Otherwise I’ll just look at it and see what happens.”

JBL is well-regarded by many wrestling fans and insiders as one of the finest heels on the WWE roster. Layfield spoke on the art of performing as a great villain. “There hasn’t been a lot of great heels, but there hasn’t been a lot of great babyfaces either. You had a lot of characters, but it’s a tough thing to go out there and want to be hated – and want to be hated by everybody. My partner Ron Simmons said it very simply when he was talking about being a heel – it’s just a matter of being a jerk. You’ve got to be hated by everybody in the arena. And so many people get the impression because they have a little cheering section, â€˜Hey, this is working.’ No, it’s not. If somebody’s cheering you, you’re not doing your job – period. You’ve got to invoke. When I first saw the towel around somebody’s neck … I saw this guy walk into a gym one day. And this guy had a warm-up jacket on and a towel on it. And I looked at it and I told my wife, I go, â€˜What an idiot.’ And then I thought, â€˜You know what? That just made me mad that this guy walked in like that.’ And that’s when I went out and got the towel and the warm-up jacket and that’s what I come to the ring with. To me, it’s just a matter of I don’t do anything that anybody would cheer. I certainly don’t try to. I grew up wrestling in Japan and Europe. I can wrestle, but that doesn’t mean I should. So I don’t do anything – at least I try not to – that people will cheer.”

You can hear this interview in its entirety – including more on JBL’s back injury, information about his new MamaJuana energy drink, Layfield’s feelings regarding some of today’s politicians, and even some JBL stock tips – at www.BetweentheRopes.com. Between the Ropes can be heard Wednesday nights online and archived at BetweentheRopes.com twenty-four hours a day.

Related Items
← Previous Story Wrestling With the Georgia Senate
Next Story → AS I SEE IT: Bob Magee – PWBTS.com