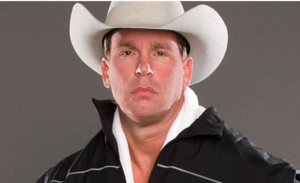 Very happy WWE and I have worked out a deal for me to return on a full time basis.  There came a need when my friend Jerry Lawler had a heart attack and was  not able to work, however, I realized how much I enjoyed being back and  this was the basis for my decision to return.

I truly love this business, one of my youngest memories as a kid was watching The Von Erich wrestling out of Dallas on Saturday nights. I missed being a part of it over the last few years. I have been amazed at how hard these guys work; it is a pleasure to be calling their matches.  And a pleasure to do homework on each guy so that I can do my part.  When I first had to retire it was the same as my first year coaching  football at TVCC in Athens Texas-I was still too close to it to really  enjoy the work.

When I was coaching I was still playing in the World League so I had more desire to play than to just  coach. My first commentary run I had just found out I was hurt and couldn’t wrestle and my desire was to return to the ring. I was doing commentary thinking that I might be able to return one day.

I now just enjoy doing commentary, and no, have no desire to ever be in the ring again. I am in the best shape I have probably ever been in due to the mountain training, but a twisted knee, ankle or back and I lose  my dream of the Seven Summits-not worth the risk to me and I had my time  and I loved it. Commentary is where I want to be.

I will doing Smackdown with Josh Matthews. I have filled in on Main Event some but mainly when Miz has a large part in the show and can’t do commentary.  Raw is 100% Jerry’s. He and Michael are a great team, I enjoy listening to Jerry and there are no plans for a three man booth with me in it. I am happy on Smackdown.  It looks like I will be doing PPVs as a representative for the Smackdown brand as part of a three man booth with Cole and King. I cannot say enough how impressed I am with Michael Cole, there is so much more to the commentary game now and he is the best I have seen.

Josh prepares well and we don’t have the sync that Michael and I have yet, but we will get there. Josh is fun to work with; I love when I get him so frustrated he throws his hands up in the air not knowing what I will say next. Michael and I had a year of commentary behind us already when I returned, Josh and I have only been doing it for a short time.

I don’t know where Josh buys those horrible sweaters and gets that spiky haircut though. And yes, I do have fun ribbing my old boss and Okie friend JR. It’s all in good fun.

Related ItemsJBL
← Previous Story Who is on the WWE’s Mount Rushmore? Your votes are in!
Next Story → Why the Rock Will Be Champion in 2013 and How Brilliant of a Move It Is – by Justin Labar