JCW reveals the latest entrants for their November 14th event 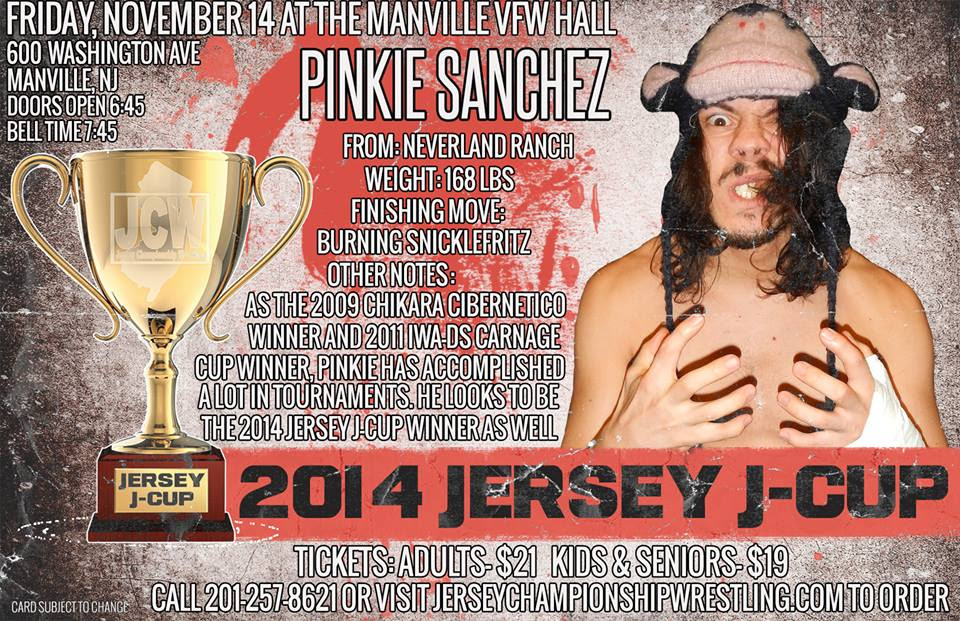 About Pinkie Sanchez
The master of the Burning Snicklefritz has been entertaining wrestling crowds for 10 years with his combination of high-flying and technical style of wrestling, paired with a total disregard for his own safety.  Sanchez is also a veteran of over a dozen wrestling tournaments, experience that may help him take home this year’s J-Cup trophy.

About Shane “Swerve” Strickland
The New Flavor King Of Swerve has a wealth of international and tournament experience, and until very recently held the CZW Wired TV Title.  During his career, he has shared the ring with Rich Swann, Grim Reefer, Bandido Jr, Jigsaw, Lance Anoa’i, Joey Janela, and Lucky tHURTeen – half of the announced tournament lineup.

About the Event
The first match of the 2014 J-Cup Tournament is scheduled for 7:45pm on Friday, November 14th at the Manville VFW Hall.  Doors will open to fans one hour prior to bell time.  Tickets are available now at www.JerseyChampionshipWrestling.com or by calling the JCW ticket line at (201) 257-8621.  Card subject to change.
—–
Jersey Championship Wrestling can be found online at the following sites: www.JerseyChampionshipWrestling.com www.facebook.com/JCWprowrestling www.twitter.com/JCWprowrestling