Jeff Hardy Between The Ropes Recap 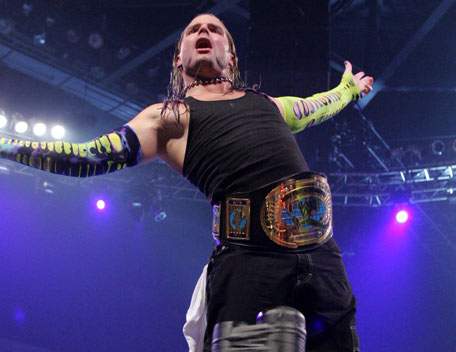 Between The Ropes
January 23rd, 2008
Archived online at BetweenTheRopes.com

WWE Intercontinental Champion Jeff Hardy joined Brian Fritz of Between the Ropes this past Wednesday to discuss his World Title match against Randy Orton at the Royal Rumble this Sunday, interacting with the fans, his time away from WWE, and more.

Hardy considers his match with Randy Orton on Sunday night to be the most important bout of his career. “By far it is. As an individual single wrestler by far it is, because this is the closest I’ve ever been to being the WWE Champion. I would say that in itself makes it the biggest match of my career.”

Although The Hardy Boyz remain one of the most popular tag teams in WWE history, Jeff is proud of the success he has achieved as a singles performer and looks forward to headlining the Royal Rumble with Orton. “It’s real cool, it really says something for myself to be able to split from The Hardy Boyz and do good on my own. It’s built a huge amount of confidence for me to be able to do something like this. And my brother too, he’s done great as a singles wrestler; it really shows a lot for The Hardy Boyz that we can go our separate ways and still be successful. So I’m really proud of that.”

Many wrestling experts and insiders pegged Jeff Hardy as a future superstar near the beginning of the decade, but Jeff admits he was too mentally exhausted and immature to hold such a position at that time. “A lot of people saw me as being this huge star back then, but at the time I was just so burned out and tired of wrestling and I just had to get away from it for a while. And that was my feeling then, I just really didn’t feel ready for it. So I really did need to grow and mature with myself to be ready for a position like this, and the time away and coming back and having such a great return has really done a lot for me, and it made me feel ready for all the pressure that comes along with a position like this.”

Although he is currently one of the hottest performers in the business, Hardy says he considered hanging up his wrestling boots permanently following a 2003 departure from WWE. “When I first left I kind of did because I wanted to do stuff with music, but that never happened on the main field or anything. I still hope to do something with that, but really, that year went by and I didn’t do anything – I just enjoyed life and raced a little more motorcross and did music here and there and released myself from the spotlight for a while. It made me think that wrestling is what I have to do – it’s what I was made to do – and so, whether I like it or not I’m good at it, and I need to get back in the game and start kicking ass again. So here I am at thirty years old and in the main event at the Royal Rumble, so that’s pretty cool for me to be back in the spotlight of things. It still concerns you as far as the schedule and everything – you have to be one-hundred percent committed to your company, and that’s what I am now. But there are times when I still feel consumed and feel like I can’t do all the things I want to do, but I’m cool with that and I’m committed to that, so now that’s what I do – I wrestle and that’s it.”

Jeff compared his current WWE tenure to his original run with the promotion. “More than anything there were a lot of new faces when I came back. But now I have everybody’s respect again and there’s a lot of difference with the spot I’m in now, because you could say I’m one of the top guys and basically I was on my way there before but I never got to grasp it. And that’s probably the biggest difference, is being respected as a top guy and looked at as an older, more mature Jeff Hardy, and still with the good-kind-of-crazy-type mentality and the rock star kind of appearance. It’s a great spot, and I still feel confident walking into the locker room every day and everybody’s cool, and that’s probably the biggest difference is just feeling like you’re on top and on the way to huge things.”

Hardy has long been one of the most popular wrestlers in WWE, regardless of what position he has occupied on the card. Jeff feels this is due in large part to his dedication toward the fans. “Honestly … I go out of my way all the time at restaurants or whatever. If there’s a crowd out there wanting pictures or autographs – and sometimes it gets really annoying, naturally – but I put up with that a lot, because I remember what it was like to be captivated by seeing somebody that I saw on T.V. and just wanting to meet them and get an autograph. So, I never forget that and always try to go out of my way to make that a cool experience for them, meeting me and what not. I think it really goes a long way; when they go home and chat online about how cool I was and then fans will want to come and see me the next time and it kind of just builds and builds. So, I think you can never go wrong with being cool with the fans, as long as you can put up with the hassle of it.”

You can hear this interview in its entirety – including Jeff’s stance on taking crazy bumps (including his January 14th Swanton Bomb off of the Raw set onto Randy Orton), WrestleMania 24, and more – at www.BetweentheRopes.com. Between the Ropes can be heard Wednesday nights online and archived at BetweentheRopes.com twenty-four hours a day.