Jeff Jarrett talks about his feud with Kurt Angle 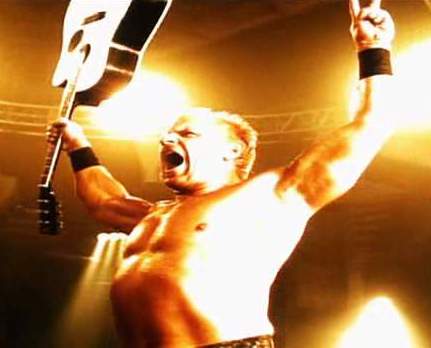 Jeff Jarrett Discusses The Likelihood Of Seeing Him vs. Kurt Angle In 2011, Where You May See The “Double J Double M A” Storyline Headed (And If The Company Has Reached Out To The UFC Or Strikeforce), His Transition From Being In TNA’s Office To Focusing Full-Time On His In-Ring Career & Promomotional Work, TNA’s Big Name Acquisitions In 2010 (And Whether He Believes “Growing Pains” Came About As A Result), Plus A Message To TNA’s Most Critical Fans

Former ten-time World Heavyweight Champion & TNA superstar, Jeff Jarrett, was one of the featured guests on this week’s live edition (12/20/10) of the award-winning Monday Night Mayhem. You can feel The Mayhem every Monday evening (at 7PM ET/6PM CT), exclusively on The Monday Night Mayhem Radio Network (www.MondayNightMayhem.com).

Jeff joined The Big Mosh, “The Chairman of the Board” Todd Vincent, & “Wild” Bill Brown in his return to “Your Home of Wrestling Radio.” His exclusive interview, along with the entire “Merry Mayhem Christmas Spectacular,” is now available in Windows Streaming Media or via the official MNM Podcast on iTunes:

His thoughts on the last year in TNA, the company successfully acquiring in some of the biggest names in the industry of the industry, the “growing pains” that came along the way over the past 12 months, & his expectations for the promotion in 2011: “When you bring in 2010 Hulk Hogan, Eric Bischoff, Ric Flair, Jeff Hardy, Mr. Anderson, RVD, a lot of strong personalities to the table, you can expect if there weren’t growing pains, that wouldn’t be realistic. As 2010 comes to a close, I believe that TNA is positioned and has people in positions to truly do what they do best.”

His message to TNA fans that believe the “sky is falling fence” mentality & that those that feel the company is always on the brink of a major defection or failure: “I think it has grown from a few critics in our fan base that was small back in 2002, and the fan base has continued to grow, and the critics have continued to grow. At the end of the day, I believe, that the critics that are so vocal, I think they’re more upset more than anything, because the man in the mirror often times makes you the most upset. That they have continued to call for our demise, that have continued to say at first you wouldn’t be around for six weeks, then six months. Every step of the way of our small successes, they’ve become more vocal & more vocal.”

More is contained in Jeff’s exclusive Mayhem interview, including more of his comments on TNA’s acquisition of Hulk Hogan & Eric Bischoff in 2010 & his message to TNA’s “most passionate” fans, along with his candid thoughts on the future direction of his “Double J Double M A” storyline (and whether TNA has reached out to either the UFC or Strikeforce), his transition from working in the office to focusing his energies/efforts on his in-ring work & promotional work for the company), what he hopes for TNA in 2011, plus so much more! Tune in to Spike TV this Thursday night (beginning at 9PM ET/8PM CT) for a very special Christmas holiday broadcast of TNA iMPACT & TNA ReAction, and be sure to call your local cable or satellite provider to place your order for TNA Genesis (airing Sunday night, January 9th on Pay-Per-View). Don’t forget to tune in to The Mayhem LIVE this Monday night (beginning at 7PM ET/6PM CT), as “The Hot Seat With Eric Bischoff” (flavored by Sizzlin Sauces) returns! Your chance to speak to TNA’s Eric Bischoff comes as part of Monday Night Mayhem’s “2010: Year In Review.” Submit your questions & comments right now on Eric’s official Facebook page (located at www.Facebook.com/TheEricBischoff), along with that of The Mayhem (located at www.Facebook.com/MondayNightMayhem). We will also be opening up the phone lines for you to call into the program LIVE, so don’t miss our final program of 2010!