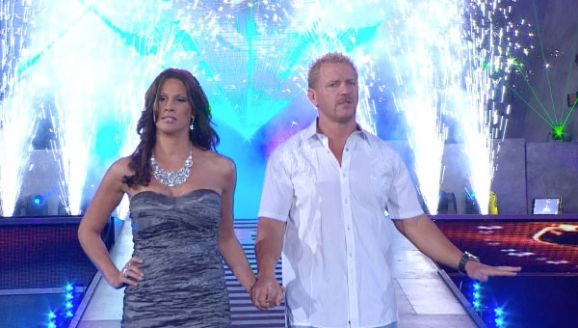 Pro Wrestling Syndicate returns live this Saturday night at The Rahway Rec Center on 275 East Milton Ave in Rahway NJ with their final event of 2014,  Fightmare Before X Mas ’14.

Autograph signing at 5pm.   Live action begins at 7pm.  Tickets are available at the door for just $20. To watch live on iPPV simply click here:

PWS has established themselves as a top drawing independent promotion with monthly crowds in excess of 1,000 fans over the past several years on events featuring home grown stars, top tier talent, and a combination of oddball gimmicky stars and nostalgic legend reunions. PWS Fightmare Before X Mas ’14 this Saturday night is forecast to be the promotion’s biggest event yet.

In a highly anticipated special attraction match,  Rob Van Dam battles “The Phenomenal” AJ Styles. This match of course puts two of the most innovative and exciting wrestlers in recent memory head to head against each other. RVD is a former WWE and ECW Champion while the accomplished Styles is a former TNA and IWGP Champion.

The PWS Championship is on the line as the undefeated Mario Bokara defends against former champion Bonesaw.  Bonesaw went on an undefeated streak of his own for over a year which was eventually snapped by “The Croatian Sensation” Bokara. Bokara has a lot of Wins in his column including most recently Colt Cabana, “The Monster” Abyss, and Luke Hawx.   Bonesaw is coming off a #1 Contenders win in a Ladder Match against the popular Starman and also has victories over Alex Reynolds, Justin Credible, and Necro Butcher amongst others to his credit.

PWS Tag Team Titles on the line as The Reynolds Brothers defend against The Handicapped Heroes; Zach Gowen and Gregory Iron whom will have their manager Hush at ringside.  Hush is a member of the PWS Wrestling School in Rahway NJ whom legit cannot hear nor speak.  Gowen is a cancer survivor whom is missing a leg and Iron is wrestling’s only competitor with cerebral palsy.  The Handicapped Heroes have been on fire since debuting in PWS while the champion Reynolds have been on a roll most recently scoring victories over The Wolves and The Impact Players.

Suicidal Six Way Title is on the line in a highly anticipated high flying affair. For those new to PWS ,  The Suicidal Six Way is a division within PWS where 6 competitors often of vast high flying ability are put into a one fall match.  The Amazing Red is the reigning champion having dethroned the cult favorite Habib From The Car Wash at PWS Wrestle Bowl 14.   Red is set to defend against challengers “The Premier Athlete” Anthony Nese,  “The Man Of Faith” Brian XL,  “The Spirit Dragon” Shynron,  Ricochet, and accomplished veteran Tracy Smothers.   Here we have a very unique match as Ricochet, Red, and Shynron are arguably the best high flyers in The US ,  champion Red has a long history with challenger Brian XL,   Anthony Nese has held gold in PWS before and is easily one of the absolute most well rounded athletes in professional wrestling, and the wild card Tracy Smothers…yes the same Tracy Smothers that has wrestled bears is competing in a match in the fast paced Suicidal Six Way division.

3x PWS Champion Kevin Matthews of Reality Check is seeking revenge against former friend Brian Myers whom has been a staple of PWS since his WWE departure earlier this year.   Myers made his debut against Matthews a couple months back in a match that started and ended with handshakes and hugs ..only to see frustrated Myers set up a Matthews ambush alongside Myers’ former Heat Seekers tag partner Gabe Tuft (whom was last seen in WWE billed as “Tyler Reks”).   This lead to a wild street fight between Myers/Tuft and Matthews and a partner of his choosing ..which was Myers’ other former WWE tag partner, Lance Hoyt.   Most recently Myers busted Matthews head open with a singapore cane shot which takes us up to Fightmare Before X Mas 14 where its Matthews vs Myers in a Singapore Cane Match.

A four way elimination match is set featuring 4 PWS competitors all with eyes on The PWS Title.   Fan favorite Colt Cabana,  The Drunken Swashbuckler,  “The Boricua Beast” Dan Maff, and the 2014 On The Spot Title Shot winner Fallah Bahh are set to collide in a match where there will be three losers and only one winner.

In singles action, PWS co-owner Pat Buck returns to The PWS ring to battle the returning Jeff Jarrett whom will have Karen by his side. Bullet Club member Jarrett is of course the founder of TNA and the current owner of Global Force Wrestling whom initially came to PWS seeking potential recruits for his new promotion.   There is a lot of pride on the line here as Buck has poured his heart and soul into furthering the advancement of PWS as well as training the nearly 50 students of The PWS Wrestling School , while the highly acclaimed Jarrett is returning to PWS after suffering a pinfall loss to Kevin Matthews a few short months ago.

Former Suicidal Six Way Champion “The Bad Apple” Matt Macintosh has been targeting the popular Habib From The Car Wash ever since Habib dethroned Macintosh as Suicidal Six Way Champion.  While Macintosh has been gunning to get ‘his’ belt back, this war has lost focus of the belt with Macintosh clearly having a target on Habib, whom thus far has consistently outwitted his adversary, however this will be their first one on one encounter.

All this plus more including an 18 man Battle Royal and appearances by Tully Blanchard, Ashley Massaro,  New Jack, Starman,
Jake “The Snake” Roberts, Guest Commissioner Kevin Nash, and more.

It all goes down Saturday night at The Rahway Rec Center in Rahway NJ.