Home / Podcasts / Jerry Lawler talks about his push in WWE

Jerry Lawler talks about his push in WWE 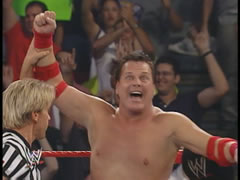 JERRY LAWLER SPEAKS OUT ON THE PASSING OF HIS MOTHER, BEING WWE CHAMPION AT WRESTLEMANIA, A MATCH AGAINST MICHAEL COLE, AND MORE – By WorldWrestlingInsanity.com

He’s been a guest on ClubWWI.com twice before and now, as he embarks on the biggest match of his WWE career Sunday against The Miz at the Elimination Chamber pay-per-view, Jerry “The King” Lawler returns for an all new interview with James Guttman to address many topics he hasn’t yet had the chance to.

The King covers a ton of subjects including his upcoming Legends Reunion tag match with son Brian Christopher against Bill and Jamie Dundee on March 2nd in Evansville, Indiana (see on facebook) as well as his big PPV bout and moments he missed on Monday’s Raw.  For a full list of topics, head to: www.worldwrestlinginsanity.com

As many fans know, Jerry was absent for Raw this past Monday due to the death of his mother Hazel.  James Guttman asks the King about his mom and the tremendous outpouring of support from WWE and the wrestling community as a whole during this tough time.  Lawler speaks out on it:

“It has been an extremely tough week and I want to thank – if any of your listeners were some of the thousands, literally thousands, – I was amazed at the emails, texts, facebook friends and that sort of response from so many people with their condolences and sympathies and that sort of stuff. It meant a tremendous amount to me.”

James mentions how many thought WWE’s handling of the situation was classy and Jerry agrees.  He speaks about the support they showed.  Guttman brings up how even Michael Cole and The Miz were respectful in their mentions on Monday and didn’t use the sad event to “get heat” as some in wrestling do. The King again agrees, but points out to ClubWWI.com listeners that the reigning WWE Champion wasn’t thinking straight when he issued a warning to how the King handles his grief.

“(Miz) didn’t want me to use the passing of my mother as an excuse to lose at The Elimination Chamber. In reality, if the young man were in his right mind, he’d know I would not use that as an excuse but as motivation to make my mom proud of me.”

Guttman points out how the match against Miz on Sunday has an extra level of intrigue surrounding it.  With the long running knowledge that Jerry “The King” Lawler has yet to wrestle in a match at WrestleMania, despite his near 20 year run with the company, the chances that he could do so as the incoming WWE Champion is the stuff legends are made of.  Could he enter the show with the belt and what would that mean to him?  As the ClubWWI.com interview continues, Lawler gives his thoughts.

“It couldn’t unfold any better.  If that were the case, if I were to win Sunday and be in WrestleMania as the WWE Champion, it’s like a dream come true.  To me, that would be better than a Rocky movie.  It would be absolutely amazing.  We’ll have to see how that unfolds.  That’s what I have the opportunity to do and – gosh – you couldn’t ask for a better opportunity.”

Jerry goes on to discuss his respect for the Miz as a performer and how’s grown since his debut.  Of course, he still has to beat him up on Sunday.  The same can be said for Michael Cole.  Since becoming WWE’s resident evil announcer, Cole has gotten under the skin of countless fans.  James brings up a possible Cole-Lawler match down the line and asks the King what he thinks about it.  Turns out that ClubWWI.com members aren’t the only ones wondering about it.  Everyone is:

“All I can tell you is that the majority of comments and emails and communications with all the fans, that seems to be the one thing that everybody wants.  Michael Cole has got everybody just completely ticked off.  They want to see him get his and it seems they want me to be the one to do it.  It’s amazing because almost every correspondence I got about my mom from wrestling fans, they’d say something like, ‘Dear Jerry, we’re really sorry and send our condolences on the loss of your mom and hope everything works out and please, by the way, punch Michael Cole in the mouth.’  Who knows?  I think that might be an interesting match.”

Jerry Lawler’s three ClubWWI.com appearances total more than two hours and are available the moment you sign up along with over 250 other of wrestling’s top stars and audios.  Log in now to hear it all.