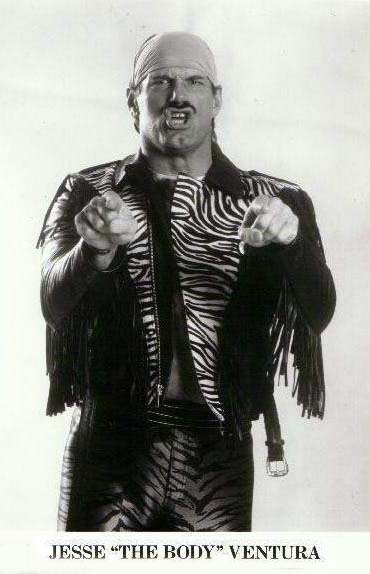 JESSE VENTURA SHOOTS HARD ON ERIC BISCHOFF, SAYS THE STORY OF HIS WCW FIRING IS AN “ABSURD LIE,” REVEALS HIS REASONS FOR LEAVING, AND MORE By WorldWrestlingInsanity.com

He’s the most talked about guest in our history. Now, two years later, Jesse “The Body” Ventura returns to ClubWWI.com for another hard-hitting shoot interview and this time, perhaps more than ever, he’s telling it like it is!

He’s made a career out of rocking the boat by speaking his mind while others hide their heads. Now, with the release of his second book, “American Conspiracies” and his critically acclaimed TruTV showcase, “Conspiracy Theory” picked up for a second season , Jesse is once again doing what he can to stir debate. Ventura joins James Guttman for an in-depth 34 minute shoot on ClubWWI.com and, as you might expect, the Governor isn’t walking on any egg shells. He’s shooting straight and rattling cages from D.C. all the way to Stamford. And if you thought our first discussion with Jesse left you shocked, you ain’t heard nothing yet.

Jesse and James discuss tons of topics ranging from Charles Manson to Vince McMahon and everything in between. Aside from talk of politics and conspiracies, Ventura also goes into detail on his long running wrestling career including talk of the real-life reason for his split with tag partner Adrian Adonis, his return to Raw, the line he wishes he had said to Vince on air, why he told Vince his father didn’t trust him, bringing his own wardrobe to Raw, whether we’ll see him back in WWE, the truth behind his relationship with Vince, why he supported the heels during his return, and much more. For a full list of topics from The Body’s ClubWWI interview, you can head: http://www.worldwrestlinginsanity.com/am2/publish/newsnotes/ClubWWI_Jesse_Ventura.shtml

Facebook members can get immediate updates on our new guests (more scheduled just this week alone!) by joining us at: http://www.facebook.com/pages/The-World-Wrestling-Insanity-Dot-Com-Page/275219172353

Jesse Ventura is perhaps wrestling’s most successful crossover star ever. From movies to politics to television, he’s always risen to the top. That’s why James Guttman felt the need to ask him about his stint in WCW. Another former ClubWWI.com guest, Eric Bischoff, has spoken about the former Minnesota governor in less than glowing terms in his book. In fact, he had claimed that Ventura was let go from WCW for missing shows and actually sleeping when he should have been working. JG asks the Body about this and it’s all news to Jesse…

“That’s a complete lie. They blackballed…you mean when I was at TBS?”

JG responds that it was and how Eric’s story for letting Ventura go was that he was nowhere to be found when they reached showtime, only to find him sleeping.

“That is a complete lie. You want to know what happened? They were bringing Hogan in and he didn’t want me there. So for four months I never got a call to come to work. They never sent me a ticket to Atlanta. Anybody who gives Eric Bischoff any shred of credibility is insane. That’s the biggest lie I’ve heard. Anybody who’s talked to me knows that I’m committed to everything I do. I don’t sleep at things and not show up to things. How can I be a governor if I had that type of attitude?”

Guttman agrees and says that’s why he wanted to ask him about it. It didn’t seem to match other stories from Jesse’s career. ClubWWI.com members had pointed out that it seemed like a strange story and it didn’t flow with other stories from Ventura’s life. In actuality, this whole thing is all new information

“I didn’t even know he wrote anything like that. That’s so absurd, it’s ridiculous. Hogan didn’t want me there because we had our falling out. He was coming in as the big power broker, which I didn’t know about, and the minute he came in, they allowed the last four months of my contract to (run out) – I mean, they paid me – they just allowed it to go into the sunset. If he wrote I was sleeping or didn’t show up for something, that is a complete lie. Go back in my wrestling career. Did I ever miss matches? Did I ever not show up? The only time was when I was struck down with pulmonary emboli in San Diego, where I was near death and seven days critical in the hospital before I was supposed to wrestling Hogan, but I think I can get a pass on that?”

As the ClubWWI.com shoot continues, Guttman and Ventura go on to discuss whether Eric wrote it thinking that Jesse would never hear the story, Hogan and Bischoff in TNA, Hulk wrestling Ric Flair on the recent Impact, how Ventura is one of the few to retire and stay retired, how Jesse’s son keeps him updated on the show, and more. Plus, tons of other topics including his infamous appearance on Opie and Anthony, realizing it was a set-up to get him to react, why Howard Stern is better than them, the fourth branch of the U.S. Government, why we can’t talk about 9/11, and so much more.

It’s the return of ClubWWI.com’s biggest guest and it’s an interview that will leave you even more shocked than the first. He’s the man who’s made a career of “telling it like it is” everywhere he’s been and this is no exception. Also, be sure to check out the Governor’s new book, “American Conspiracies,” detailing some of the most shocking conspiracy theories from U.S. history with extensive documentation to back up the claims. Any fan of Jesse won’t be disappointed.